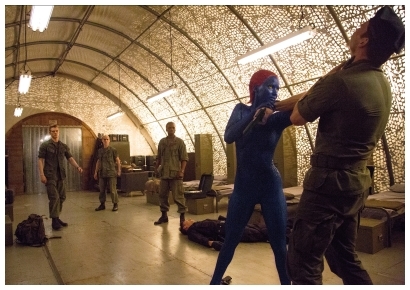 Time is, time was, time's X-Men: Days of Future Past. There were clearly commercial reasons why the latest chapter in the X-MEN franchise had to be a time travel tale: Having previously flubbed the introduction of a new, younger Professor X and Magneto (James McAvoy and Michael Fassbender, respectively) in X-Men: First Class, the producers clearly wanted to recover a bit of the franchise's mojo by bringing back the old band -- namely Patrick Stewart and Ian McKellen under the direction of Bryan Singer (plus Hugh Jackman) -- while also trying to finesse the audience into a better appreciation for their replacements. The side benefit is that the time period decided upon for this film has interesting significance for themes explored in the X-MEN universe. After my quick review of the surprisingly decent Maleficent, I turn my attention to what Singer has wrought.

Hour of the Wolf Movie Review of X-Men: Days of Future Past

LISTEN TO HOUR OF THE WOLF EVERY
THURSDAY MORNING AT 1:30 AM
ON WBAI 99.5FM IN NEW YORK CITY
AND LIKE THE SHOW ON FACEBOOK