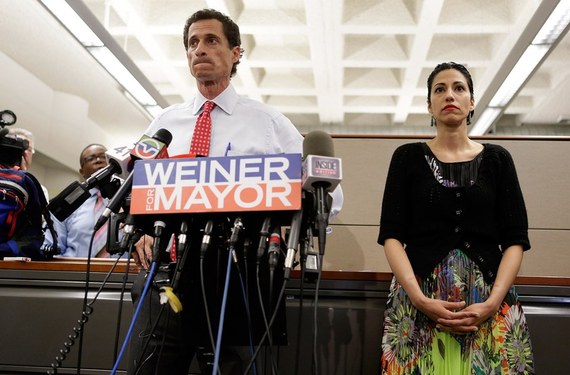 Josh Kriegman and Elyse Steinberg expected to make a documentary about a comeback when Anthony Weiner ran for mayor of New York two years after resigning his Congressional seat in disgrace over a sexting scandal. But they ended up filming a second scandal when the then-front runner was hit with revelations of another round of sexting revelations.

In an interview, Kriegman and Steinberg talked about what they hoped audiences would see in the film. Kriegman, who worked on Weiner's Congressional staff, said it was important for them to show Weiner's strengths as a politician.

I think that he has a lot of enormous talents as a politician. He's a really gifted political figure in a lot of ways. The film opens with him basically just screaming on the floor of the House, expressing real outrage at the 9/11 health care bill being blocked by Republicans. And I think that that captured something about him that really was special and really allowed him to become what he was before his scandal, a rising star in the Democratic Party. He had this kind of New York brash, aggressive, kind of happy warrior ethos that he cultivated, where he wasn't afraid to just stand up and speak very loudly and clearly about his progressive beliefs.

I think that was a voice in our politics that a lot of people are going to be left really yearning for and were really responding to prior to his resignation. A lot of people on the progressive side of the aisle want that kind of voice, unapologetic, willing to mix it up and to go toe to toe with Republicans. He captured that and it really resonated. He became very well known for his health care efforts. And you're absolutely right he really was a wonk; he really did get into the nuts and bolts of how things work and he enjoyed that aspect of it. So his signature issue that really sort of made him a prominent persuasive figure in the Democratic Party was advocating very strongly for single-parent health care doing the health care debate in a way that really I think set him apart from others who maybe had the same positions but weren't necessarily advocating for it as effectively as he did.

And he said recently, "I think for a lot of politicians, especially politicians on the Hill, interacting with voters is maybe their least favorite part of the job." For him it really genuinely wasn't. He was so in his element in connecting to constituents. There was no place that he liked more than to be on the New York City street corner, having an argument about policy. That was where he felt at home and comfortable and where he belonged. I think that he recognized in some ways his temperament maybe fit better as Mayor than even as a Congressman.

The film shows his passion for reaching out to voters. Steinberg said,

I didn't know Anthony prior to working on this film but I was also very impressed with his retail politics. You saw him just really connecting with voters and not leaving them until he communicated with them about ideas. What you see in the film is genuine, you go to parades or you go stumping and people really responded to him. There is a visceral connection going on and he seemed to really enjoy it.

The documentary is as much about politics and culture in the world of new media and social media, and what it is fair to expect from the private behavior of public figures. Kriegman said,

Should there be a private sphere in public life? I think it's a good question that I don't know that we have the answer to. It seems that there used to be and there no longer is. Everything is considered fair game and relevant to public service. I don't know that we know the answer to whether that should or shouldn't be the way it is but clearly it is. And from Anthony's perspective, his feeling about his scandal and his effort to get back into politics was, "I'm going to let the voters decide if they think that this is disqualifying and if it is, it is."

In terms of the context of Anthony's scandal and the events of our film, you do see this shift right now towards spectacle and entertainment rather than substance. Social media and political news coverage which becomes driven by tweets and sensational bloggers. It does drive an entertainment element into politics. And you certainly see that in the way that Anthony's story unfolded, and you certainly see that right now with Donald Trump and his candidacy. So we were definitely thinking about that when we were putting together the film.

The movie's most powerful moments contrast the public responses to the story, from headlines to late-night talk show jokes, with intimate, anguished moments between Weiner and his wife, Huma Abedin and with his devastated campaign staff. Kriegman explained,

We had 400 hours of our own footage and then we had a literally unlimited quantity of archival footage. There was no end to it and so this was a big challenge for us. How do we make sure that this story does have these underpinnings that speak to the larger moments? One of the tropes that we quickly found was pretty exciting and very useful in this way -- taking the public versions of the story and then contrasting them with the behind the scenes version so you would see an event play out and then you literally go home with them and see what's really going on. We did that contrast again and again throughout the film and I think it really hammers home this idea that the reality is different. It's more complex and nuanced and interesting than a lot of this kind of reductive flurry that we end up getting through tweets and headlines and cable news.

Steinberg said that as they worked on editing the film, that contrast continued to surprise her.

There would be the public story and then we would see the private story. You see the jokes that were being made about Anthony and then you would see him putting his kid to sleep at night and these are two different stories. Or you see Anthony and Lawrence O'Donnell having an argument on cable television and then you see from a side angle that he is actually alone in that room talking to himself and it's like a completely different story. It really was about showing humanity behind the headlines.