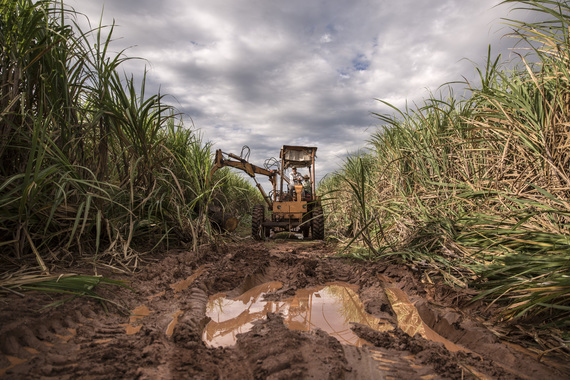 About nine months ago I was sitting in a conference room on the outskirts of Paris, watching more than two hundred countries vote to approve an international agreement to tackle climate change.

I had spent the past two weeks as an observer at the talks, advocating for the protection of land and food rights, particularly for local farmers in developing countries. Exhausted, I mostly remember that I was really hungry. Paris of course has many amazing restaurants, but I had been working long hours since arriving more than two weeks before, and was mostly living on a diet of ham and cheese sandwiches, croissants, and crepes. It could have been worse, but I wanted a real meal and then to sleep for about a week!

Optimists will tell you that the agreement is a turning point in the fight against climate change. From the U.S. and Germany to China and Senegal, countries came together and agreed that climate change was a threat and that action needs to be taken. That the details are imperfect is to be expected. And considering most of our own Congress is still denying the science behind climate change, the UN process adds some much-needed sanity!

This is partially true - the agreement is a major diplomatic achievement. There are some parts of the Paris Agreement that I agree with and fought for - including the very fact that it exists at all. The importance of limiting warming to 1.5 degrees Celsius, the inclusion of human rights, and the importance of helping communities adapt to hotter temperatures, shifting rainfall patterns and extreme weather.

But there are parts of the agreement that I strongly disagree with. The low levels of ambition, lack of a clear roadmap for how money will be made available to help people adapt to the changing climate and the promotion of false solutions to climate change that rely on large areas of land to grow food crops to be burned as fuel.

As with all major negotiations, you have to look at the whole deal and then consider whether it's something you can support - and keep fighting for the things that are missing. But the problem is that climate change will not wait for us to figure all this out. The huge levels of greenhouse gases that we continue to pump into our atmosphere will result in warming that will have dire consequences, especially for the poorest and most vulnerable people.

If we don't act now and cut our emissions, it'll be impossible to keep temperature rises low enough to avoid disastrous levels of climate change.

To be clear, this isn't something we can just get right next time. Once this pollution is in our atmosphere, it will stay there for well over a hundred years. Trees, grasslands and other plants can help absorb these harmful emissions, but the amount of greenhouse gases they can store is limited, and any progress will be reversed if forest fires or other natural disasters cause these gases to be released.

You'll also hear people saying that technology will solve our problems. But much of these ideas like Carbon Sequestration and Storage or Bioenergy with Carbon Capture and Storage haven't been proven to work at a large enough level. Plus, things like biofuels also require huge amount of land to grow the crops that we then burn as energy, which makes local food prices more unstable and means local people are being pushed off their land to make way for plantations that grow food for fuel.

All this means that the only way forward is to cut our harmful greenhouse gas emissions.

So the real question to ask is are we now on the path to stop climate change in a way that protects human rights? We still don't know the answer to that question.

The Paris Agreement is legally binding, but each country gets to set their individual target and how they want to go about meeting it. This may seem like a strange approach, but was necessary to keep big countries like the United States involved in the process. The commitments that have been put forward by countries so far are far short of what's needed to keep global warming below 1.5 °C.

If the Paris agreement is going to be a real turning point in the fight against climate change, much more ambitious action is needed now. That means support for truly clean and renewable energy that respects people's rights, and a phasing out of fossil fuels like oil and coal. It means that we stop cutting down trees and restore our environment. It means supporting a just transition for workers in the fossil fuel industry as they transfer to other jobs, respecting people's rights, and making the money available to help communities most at risk to adapt. And for rich countries, it means making and keeping clear pledges to provide that money.

But it doesn't stop there. Countries must be much more ambitious with their emissions cuts. And we need to make sure that developing economies aren't made to carry an unfair share of the burden and their people forced to continue living without access to energy, while the countries that caused the problem make only token cuts that don't reflect their responsibility for causing the problem.

The agreement that was reached in Paris may still become the transformational turning point moment that some people foresee. If this to happen, we need the enthusiasm for signing the agreement and bringing it into force to translate into actual action.