When I tell folks that my main course of study at Union Theological Seminary in the city of New York is eco-theology, I get either knowing nods or quizzical looks. In either case, it doesn't take much explanation to show that the Earth and the Divine are inherently connected, that you cannot have one without the other. As I have spent my summer getting the soil that sustains me firmly lodged in my fingernails and pores, I have been pleasantly surprised to see and feel that a calling to the service of the Earth may indeed be my calling as a service to God. My case of nature-deficit disorder may not be as severe as I first thought. I am more convinced than ever that to work and create earth-centered ecologically-sound communities and local food cultures, grounded in the timeless wisdom of ancient spiritual tradition, is the most vital justice work of our time and also the true spiritual revolution of our time.

On the surface, The Small Farm Training Center (SFTC), and its leading farm-hand Terry Sheldon, are offering a vital example of local eco-conscious community and food culture, but befitting Terry's decades-long immersion in the Vedic spiritual tradition, and the practice of bhakti-yoga, the SFTC is, at its essence, a reflection and practice of humanity's most original and natural connection to the Earth and to the Divine. On the SFTC website, Terry explains the Vedic ecology at the core of the SFTC:

"There exists a deep ecological tradition in Vedic culture by which human settlement, forests and water resources are carefully balanced. To achieve that balance, nature's welfare and human welfare cannot be separated each other. For this reason Vedic ecology teaches that the earth and the cow are to be loved and cared for as mothers. As such, culture -- including the cultivating of land for crops -- is an outward expression of spirituality. As a painting expresses the spirit of the artist, culture expresses the spirit of society. Vedic culture has lasted for many thousands of years and is still visible even today. It's a way of life that's lasts forever, is self perpetuating and regenerating."

Terry further explains that the heart of his work with the SFTC, in helping people of all colors, kinds, and classes to become "paradigm warriors" for the shift from our unsustainable corporatized-industrialized civilizational model to a sustainable Earth-centered model, is hands-on education with deep wisdom:

"Whether you're reading the sagacious words of Wendell Berry, or the biting commentary of Vandana Shiva, their conclusions are the same: The skills, aptitudes and attitudes that were necessary to industrialize the Earth are not the same as those that are needed now to heal the Earth, or to build durable economies and good communities.

We agree wholeheartedly... but our analysis goes one layer deeper to include the spiritual dimension. Without recognizing the role spirituality has traditionally played in preserving our planet's delicate web of life, we're easily tricked into believing that secular science will come-up with a green techno-fix to save the day. It's those brainy scientist types, not the sages of yore who deserve our veneration, so goes conventional thought.

If Western education has driven the planet to a point of crises, what is wrong with that education? And secondly, can any current Western educational institution -- whether it's orientation is secular or Judeo-Christian -- identify what's gone wrong and offer courageous or inspired leadership?

What's needed is not more education but education tempered with wisdom--education the teaches the value of local, the interconnectedness of everything, cooperation over competition and conscience over efficiency. Let's do an about-face. Is there a model that can dismantle the scaffolding of ideas, philosophies and ideologies that constitutes the modern world view? Let's look to the East."

The SFTC is a living example of a no-harm mini-farm which is attempting to rewrite the landscape of eco-conscious community and local food culture in the hills of West Virginia. The "coming food revolution" that the SFTC wants to help create includes reciprocal links to networks of urban-based community gardens in schoolyards, low-income housing projects and the spaces left behind in the food desert. Terry writes that:

"No-Harm Mini-Farms will focus on food varieties that stress plant-based diets and plant-based protein sources, including milk from a resurgent family-owned dairy industry. Domesticated farm animals-especially cows-will reappear as welcomed additions to the rural and urban landscape. Animals will be protected and valued as co-authors in the revival of cereal grain production and soil fertility renewal."

For the denizens and the tillers of the SFTC, sustainability is more than just about living in the material world. The cultivation of the Garden is also a cultivation of the garden of the heart, of the soul's journey towards self-realization in loving relation to the Divine. Real sustainability, according to Terry, has as its foundation the understanding of the karmic fabric that ties all life together. The farmer, and all other living entities who work with her, must see their work with the soil as a divine service. All the energies of the work being done, if offered for the pleasure of the Divine and all living beings, if done with as little harm as possible (which excludes raising animals for slaughter), insures not only material but spiritual health, wealth, and evolution.

"The real future of this whole thing is village life, where we develop ways to communicate and entertain and grow our own food, raise our children, educate, that is so location specific that it works. You develop loving, interdependent relationships with people, mutually interdependent relationships. That's our background actually. That's where were all actually coming from. That's what we're all looking for.

Defining relationships in this universe that are not competitive. They're cooperative. They're interdependent.The fact is that we're divine in origin. We are spirit souls. We are not bodies. We need a farming system and a philosophy that drives that farming system that recognizes the position of the soul and revers it as sacred. You're not completely non-violent, but it means how and when that violence is enacted. Its done very carefully.

Beyond being vegetarian is making a sacrament of your food, and in the Hare Krishna Movement this is called taking, or honoring prasadam. You re still karmically accountable for vegetables that are killed Its not as severe, but its there. You're taking life to maintain your life. How do you get out of that? I need to eat, but it always involves taking life. The way out is to make sacrament of the food. To take it from a source that's acceptable to be offered and the mentality, the consciousness of how you grow it, harvest it, store it, how you cook it, serve it, is done in spiritual consciousness. This is called honoring prasadam.

It is honoring the arrangement of nature by which all these things are given to us graciously for our sustenance so we can get on with our real business, which is self-realization."

Let me take you on a short tour of the Garden of Seven Gates, the beautiful centerpiece of the Small Farm Training Center in Moundsville, W. Va. 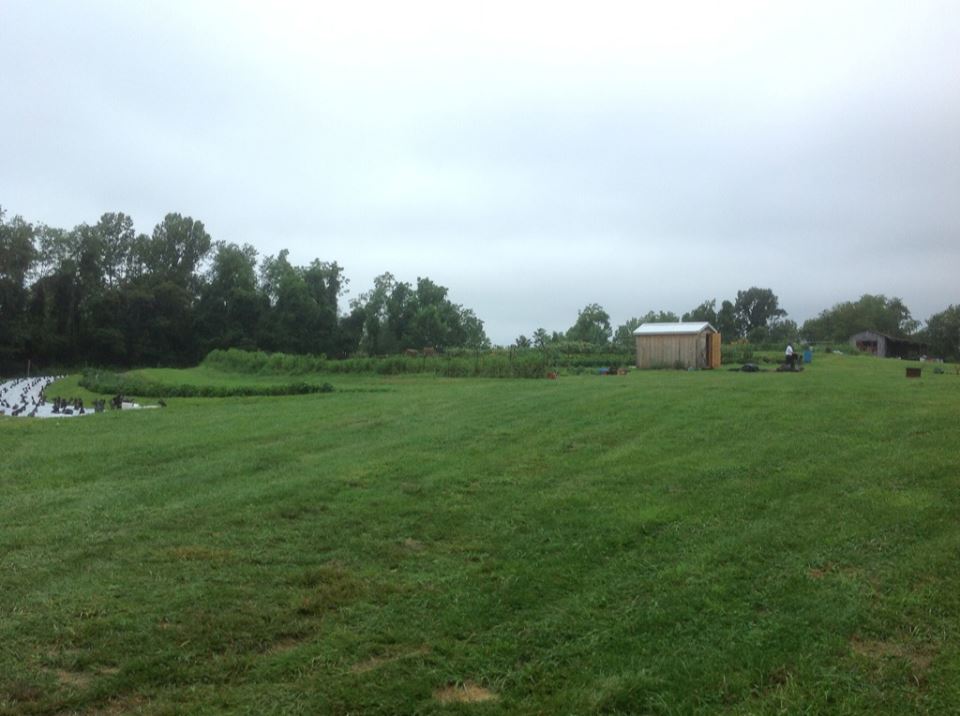 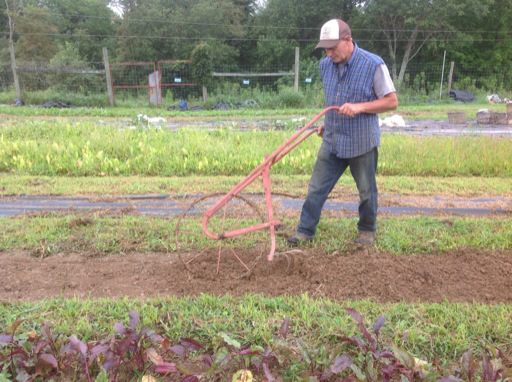 The Garden of Seven Gates is a certified organic project at the forefront of the local food revolution. The Garden and its tillers produce a diversity of succulent and sanctified foodstuffs for the local New Vrindaban Krishna Consciousness community. It is also the flagship farm behind the vibrant environmental/food justice works of the Green Wheeling Initiative. 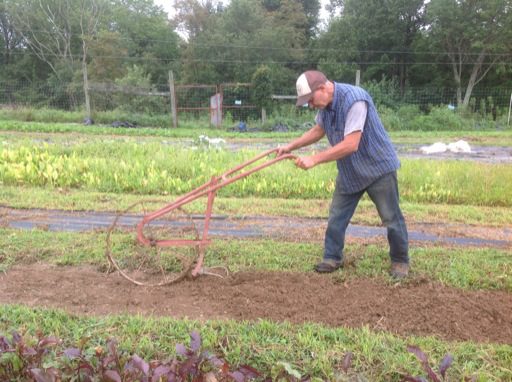 Here Terry Sheldon, head tiller of the Garden, here uses a traditional hand-tiller to prepare a bed for a hopeful new crop of string-beans. The ethic behind the Garden is hand and heart power creating food which itself will create justice and enlightenment for the local community. 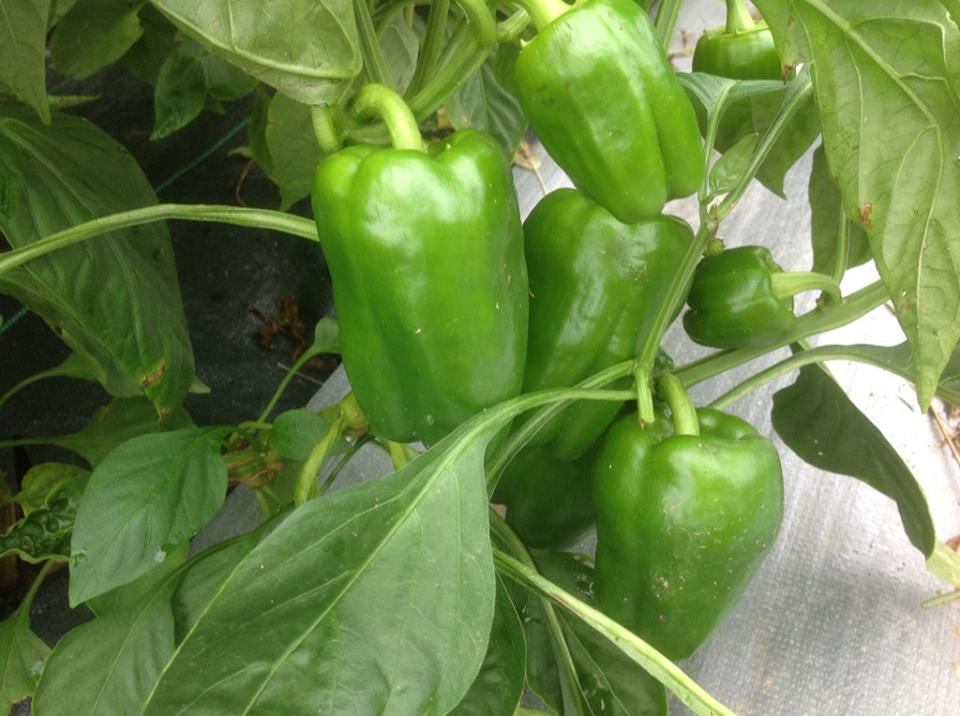 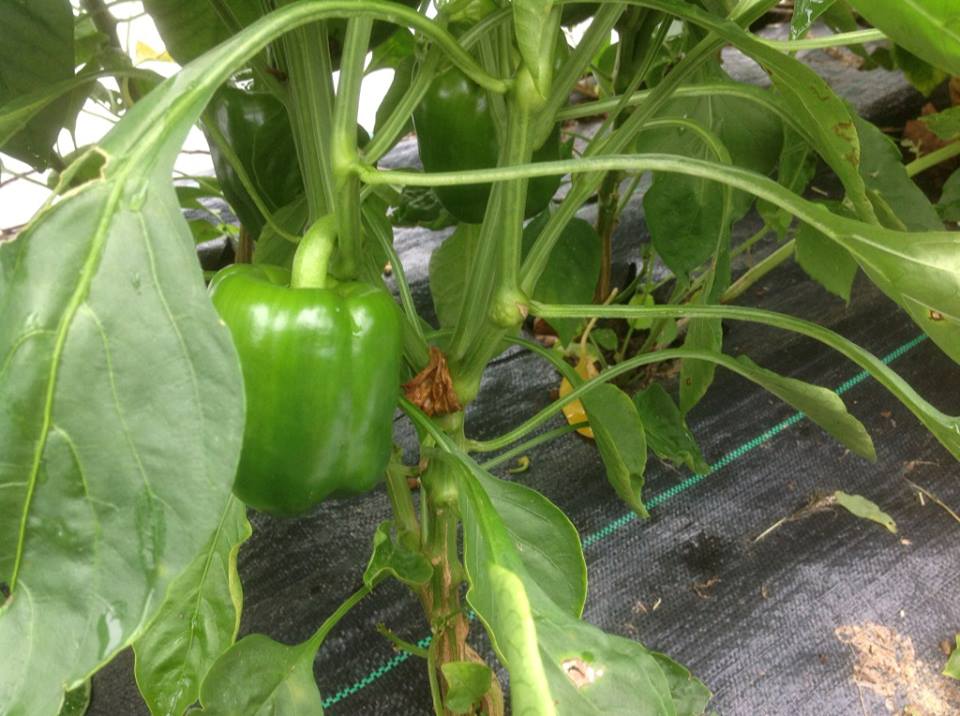 A plethora of fresh green peppers. 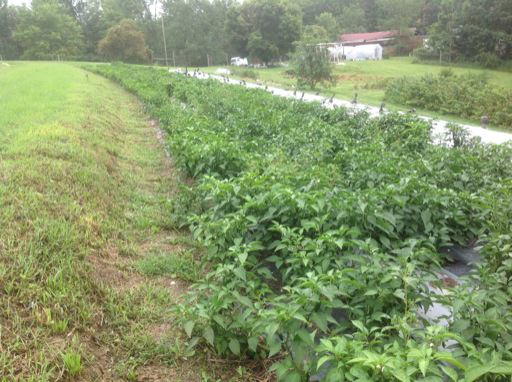 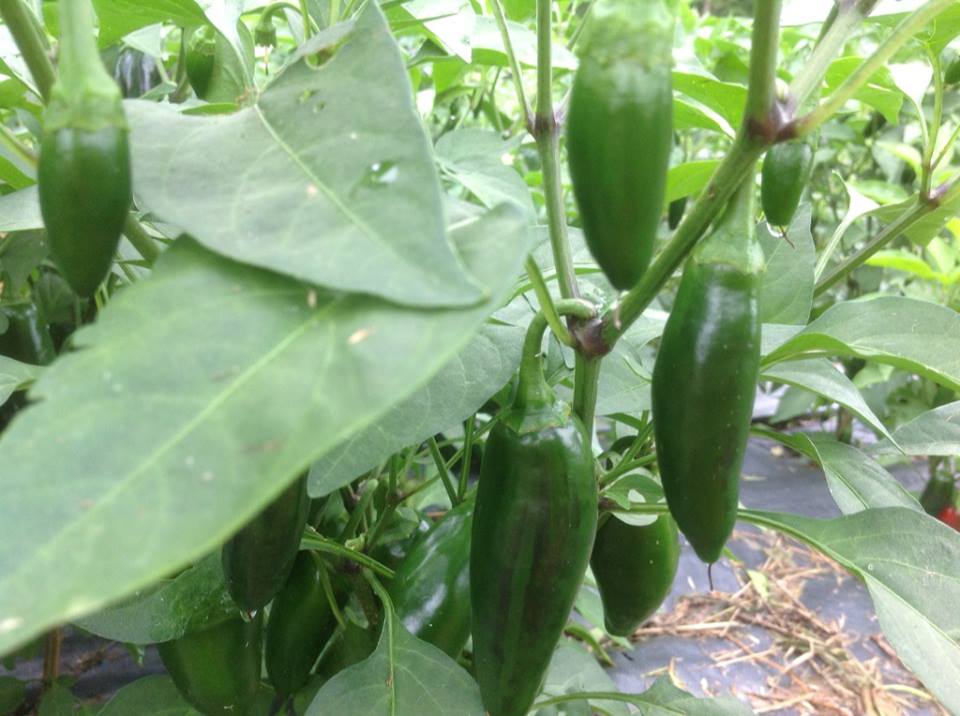 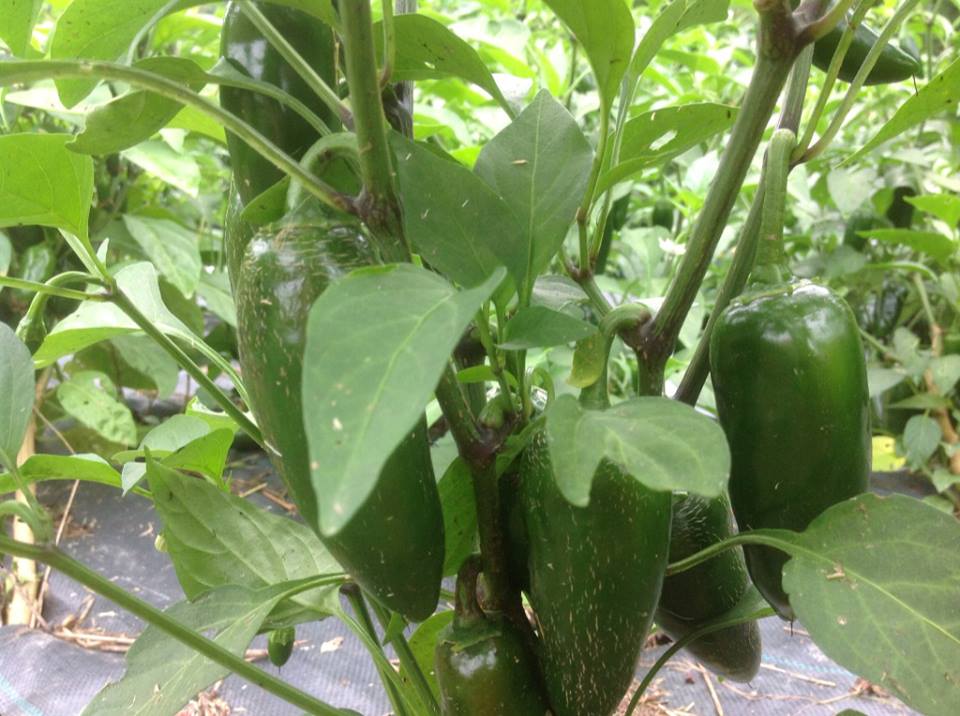 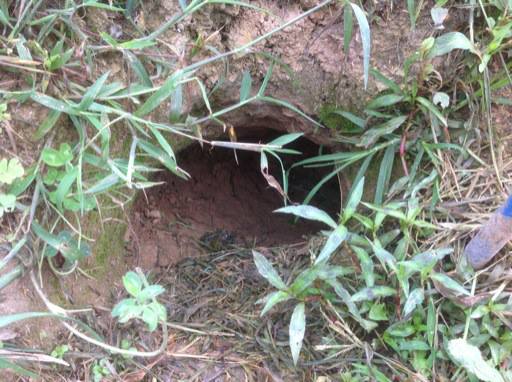 The hole leading to the lair of the groundhog, the adorable yet inconsiderate creature who can't control his tongue in relation to the Garden's edibles. A remake of the cinematic classic Caddyshack is currently being filmed on the premises. 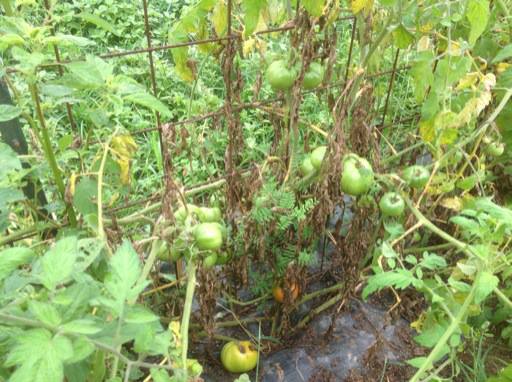 Young tomatoes struggle through a wet and wily season of Appalachian weather to bloom and grow. 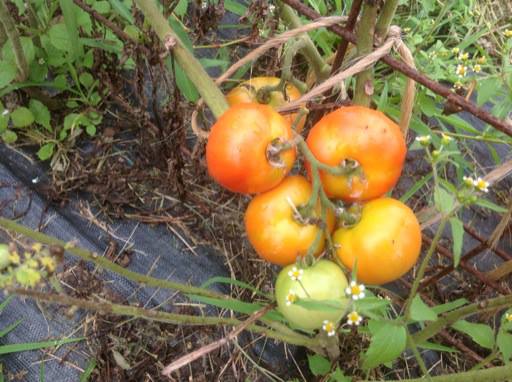 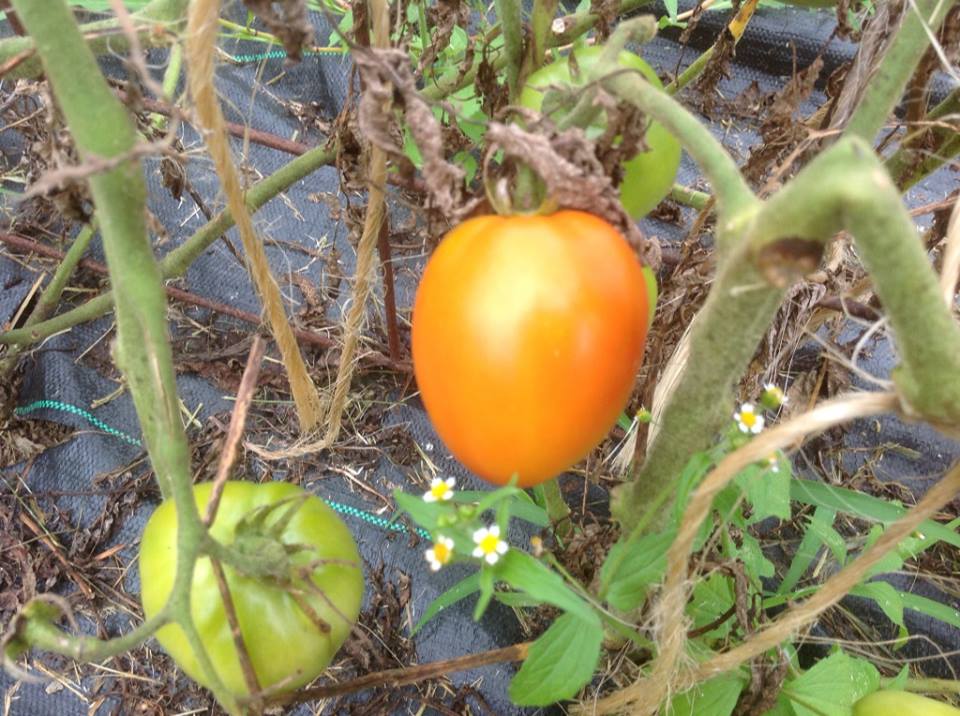 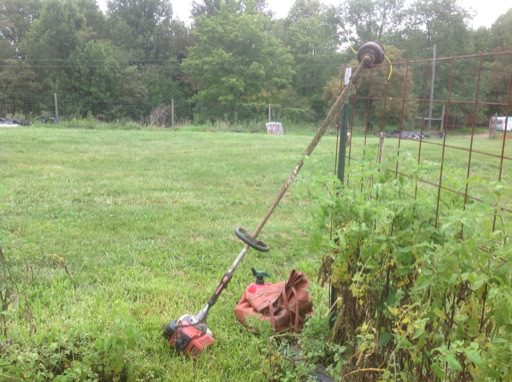 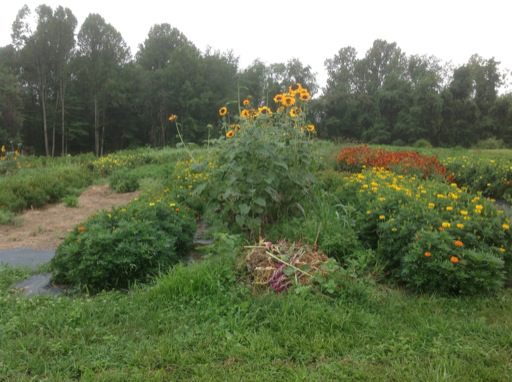 Our flower patch, which is used to sumptuously decorate the altar at the Radha-Krishna temple at the New Vrindaban community. 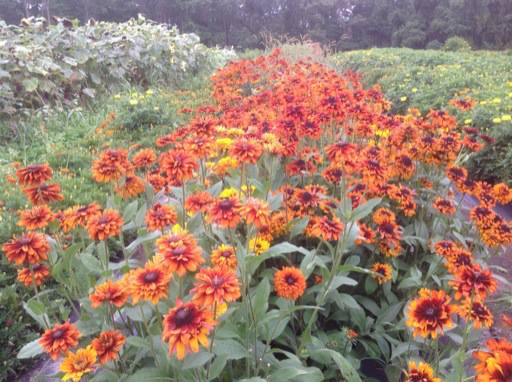 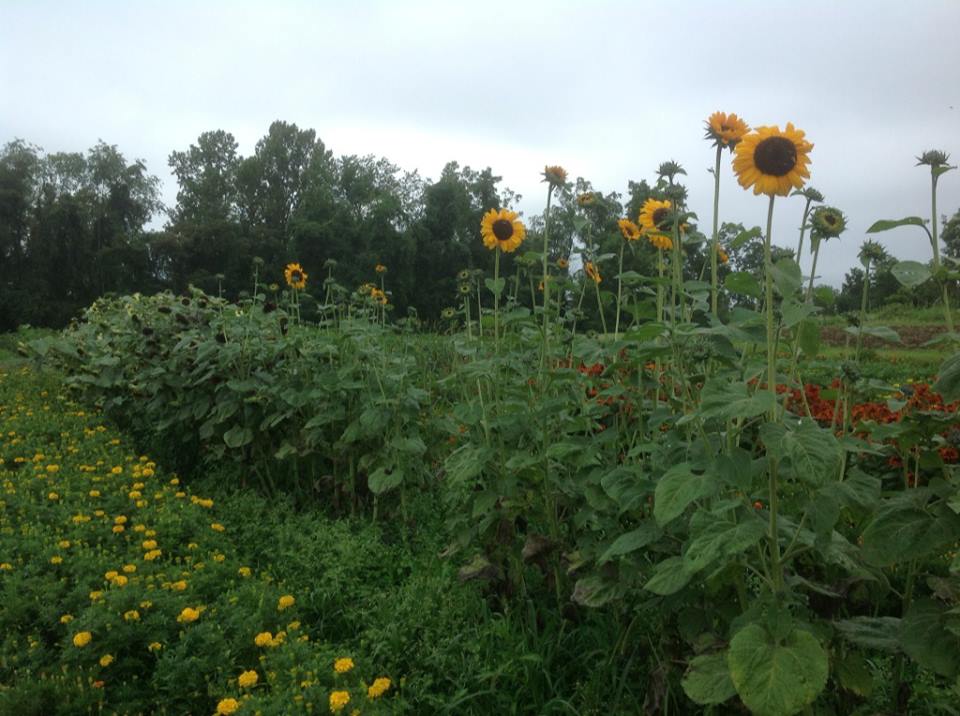 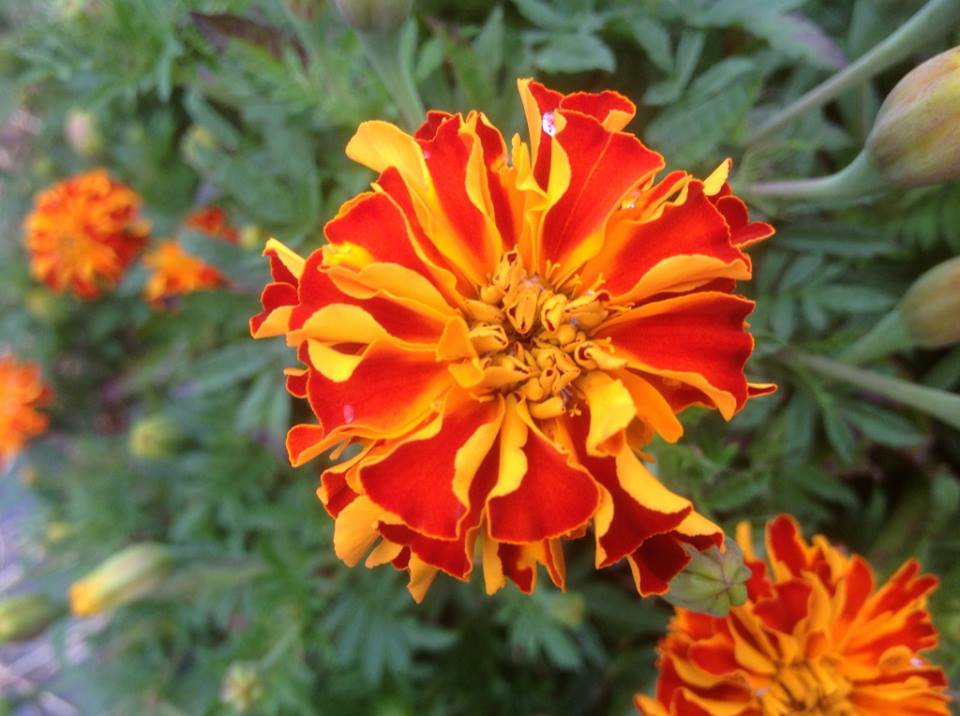 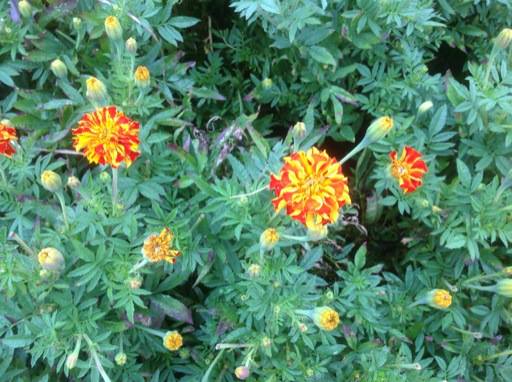 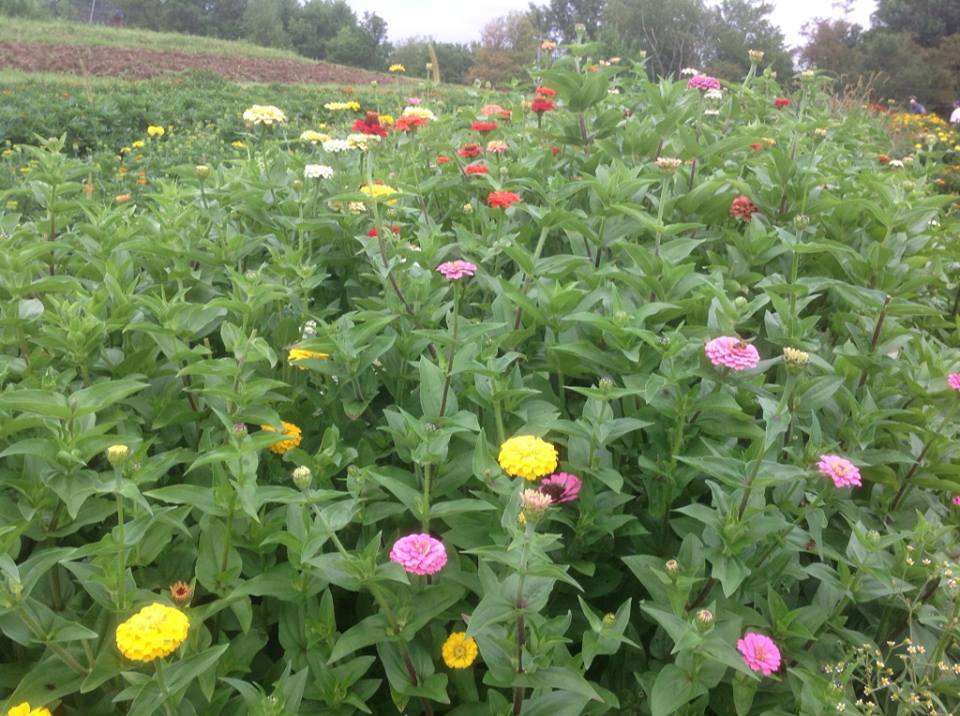 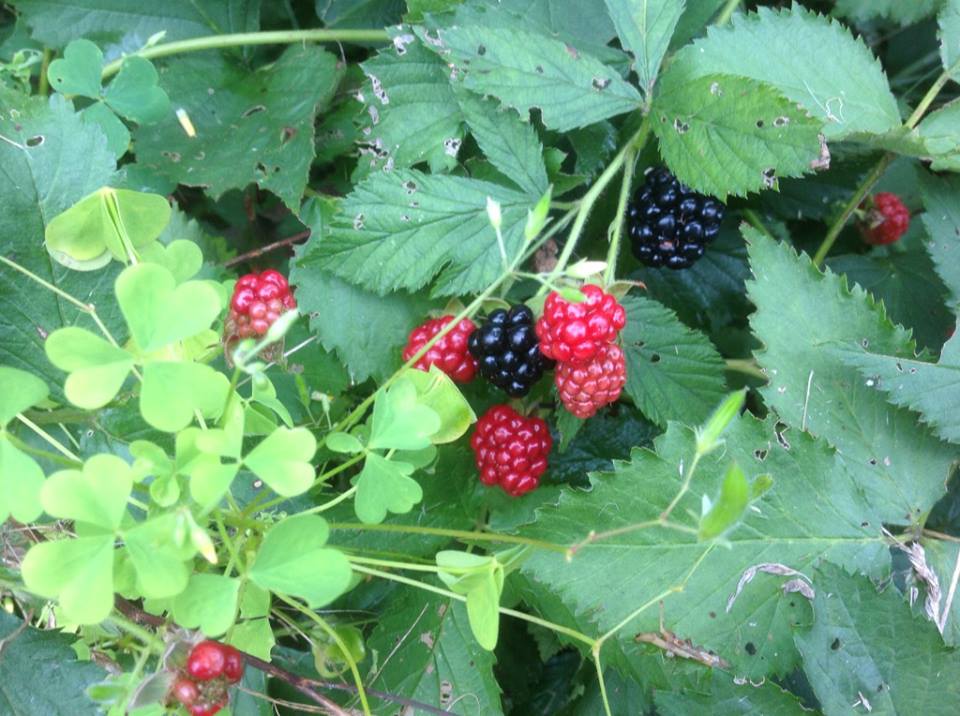 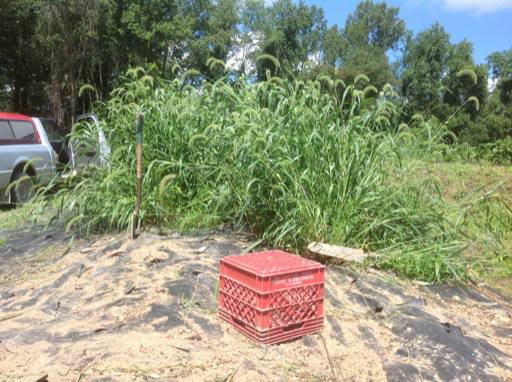 This was the Summer of Weed (not the happy kind necessarily). In order to clear this row to plant a late batch of winter squash, Terry and I spent nearly 8 hours hand-weeding nearly 200 feet of these ginormous weeds. 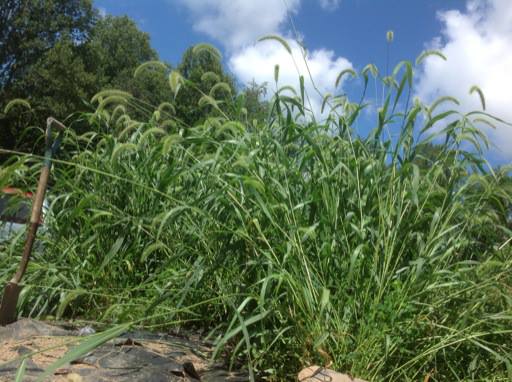 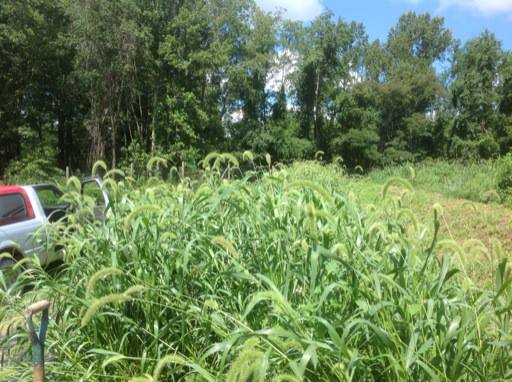 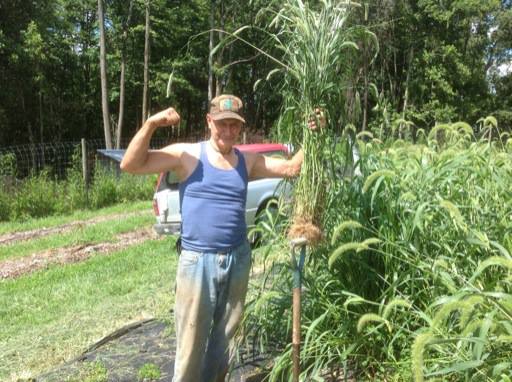 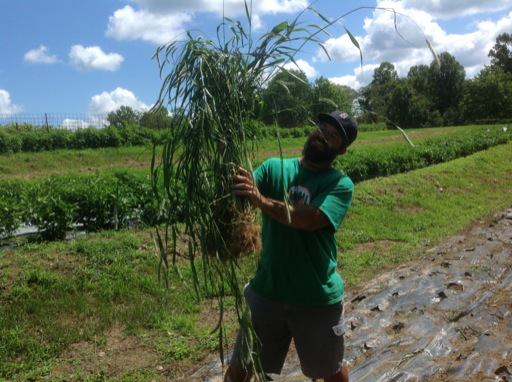 I've become delirious with fatigue dealing with weeds ten times my size, with roots several hundred feet deep, or at least it felt that way. 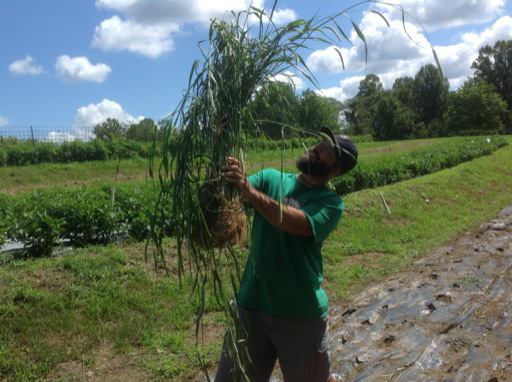 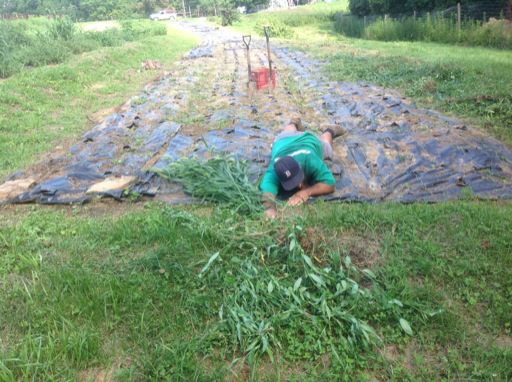 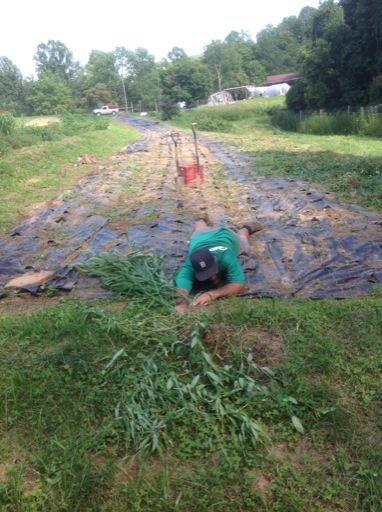 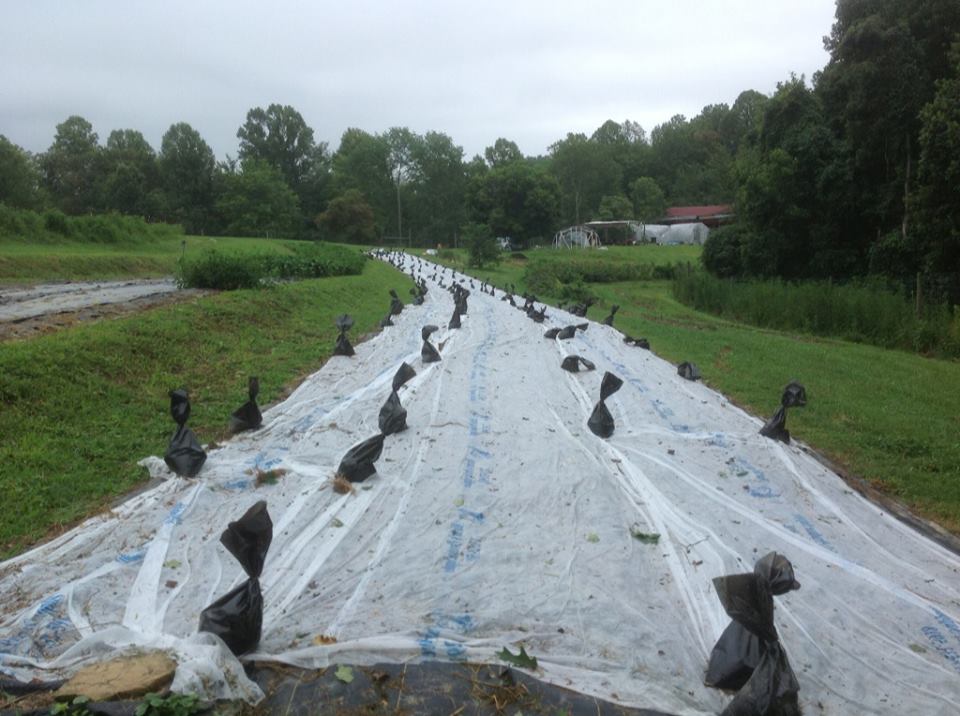 The weeded patch now planted with winter squash topped with row cover to keep the elements and damned groundhogs from getting too rowdy.

Click here to listen to Terry's interviews on the Green Wheeling Initiative and the Small Farm Training Center with West Virginia Public Broadcasting.