I'm going to short Dry Powder, the generally amusing new play by Sarah Burgess about Wall Street. It's strongly acted, fluidly directed, impeccably designed...and a little disappointing. Anyone with tickets to this sold out show will be pleased by the talent on display: Claire Danes, John Krasinski, Hank Azaria and Sanjit De Silva are all good in a story that's momentarily entertaining. But just two days later it's fading from my memory. For starters, the would-be sucker punch of an ending needs two of the four characters to betray most of what we know about them (not to mention some financial realities) in order to get there. I'm not sold.

Here's the deal. Azaria (in top form) is Rick, the head of a private equity firm facing a tsunami of bad press. The same day they fired thousands of American workers from a grocery store chain their firm was stripping for its assets, Rick staged a garishly lavish engagement party. Oops. Bad press is par for the course these days for shark-like private equity firms. But this negativity is so vicious that investors are starting to panic and pull their money. Rick is panicking too. He wastes time vetting the speech that Jenny (Claire Danes, going all-in on her emotionally vacant character) is giving to college students, worried over her tone deaf response to any calls for humanity. (It's a waste of time because she's so utterly out of touch with the average person that her speech would be a PR disaster. Surely Rick would just tell her to cancel.)

Rick is hoping for a quick adrenaline rush of good news via a new take-over target. Golden boy Seth is the yin to Jenny's yang and he (played by the very appealing Krasinski) has discovered an American luggage company ripe for acquisition. Seth sees value in the company where no one else does, thanks to a plan to go online and venture into bespoke luggage. Seth has engineered a bargain asking price from the company's head and a plan for growth that will mean they can actually increase American jobs, get good press and make money in the process.

Needless to say, Jenny crunches the numbers and decides they can make more money with less risk by simply stripping the company of its assets, selling off the corporate office, firing all but six employees and move manufacturing to Asia. Who's plan will triumph? And does Rick have the luxury of choosing long-term growth over a short, sharp takedown that would mean a big chunk of change? Let the battle royal begin. 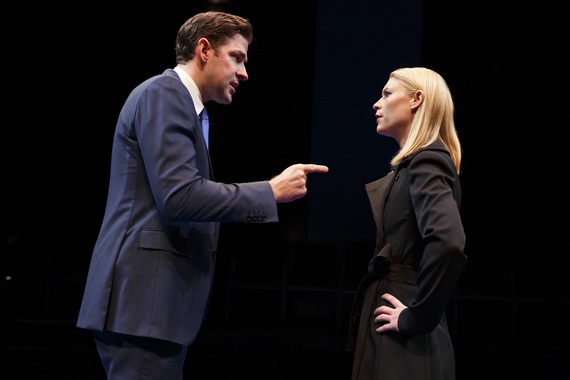 More complications ensue, especially when Jeff (De Silva), the acting head of that luggage company, shows up to finalize the deal. He's focused entirely on making sure his employees are taken care of and trusts Seth to do right by them. Seth of course is wracked with guilt over not telling Jeff that the employees may in fact be tossed aside after all, like some cheap carry-on that doesn't fit into the overhead rack (or their plans). A last minute twist means Jeff innocently tempts his new best friend with another idea: what if Seth left Wall Street to join Jeff, they raised their own money and put the plan they've developed into action on their own? Seth could become a real businessman, an honest to goodness jobs creator, make a lot of money and sleep soundly at night! Is Seth willing to take the same risk that he's urging on Jeff?

Dry Powder is slickly enjoyable as far as it goes. Director Thomas Kail (Hamilton) keeps the brisk show moving without ever losing focus. The story is staged with the audience on all four sides. In a good show done in the round, you rarely feel like you're in the wrong spot as a viewer; that's certainly the case here. The elegant set by Rachel Hauck employs some brightly colored cubes stacked this way and that to suggest an office, a bar and so on, ably aided by the lighting of Jason Lyons and the seamless music and sound design of Lindsay Jones. (Sometimes, the highest compliment one can pay to a sound design is that you didn't consciously notice it.) The costumes by Clint Ramos are spot on, right down to the sleek corporate look of the stage hands who move the set pieces around. (I may be imagining it, but I thought that the outfits of Danes rather counterintuitively went from more restrictive to more flattering, a nice reflection of her corporate fortunes rather than her inner life.)

The problems begin with Jenny. Most audiences will immediately be sympathetic to Seth and his desire to actually NOT demolish yet another company for short term gain. So for the drama to be heightened, we need to have Jenny seduce us with her worldview. Instead, much of the humor of the show comes from Jenny, who is so heartlessly clueless to the opinion of others that we laugh in horror. It's like Data on Star Trek: The Next Generation -- she literally can't understand or care to understand the attitudes of anyone else. That's a bad comparison, actually, since Data at least tried.

Danes I believe gives the performance of the character as written and desired by Burgess. Certainly her opinions are voiced by many of the 1% and not just on CNBC. But her inability to even comprehend the idea of public image or how others might interpret her comments beggars belief. It makes Jenny such a poor opponent for Seth to challenge that we never have to worry about secretly thinking she kind of makes sense.

To stack the deck even further, Jenny is so monomaniacal about her job that she stays up for two or three days straight crunching numbers, practically collapsing on her boss's floor and in the process overworking an underling so much he is rushed to the hospital. Needless to say, she doesn't know the lackey's name or current condition and wonders why Seth would care. Jenny, in short, is literally a stick figure to mock, throwing the entire tug of war between her and Seth out of whack. She may or may not win the battle but she'll never win our grudging respect or even convince us she's anything but a conceit.

Similarly, De Silva is wonderfully decent as Jeff, which any theatergoer can sense will lead either to his being crushed or corrupted. Indeed, Rick and Jenny dangle a big fat bonus in front of Jeff to abandon his beloved employees and sign on the dotted line. One can see the plot twist a mile away but since it means ignoring every single word this character has uttered and every single thing he's done, whether or not he takes the money it feels like a cheat. As a final dig, Jeff's "price" (he's asked to give a figure, just for argument's sake) is so low we have to assume he's a sucker on top of it all who would sell himself cheap.

Finally, two financial issues confuse things. One, Jeff off-handedly mentions having a failing vineyard on the side. Well, maybe. But given what we know it seems unlikely since the founder of the company has yet to cash out. Since that guy has not had his real payday yet, how could Jeff be rolling in so much money he has a frickin' vineyard? It's not out of the realm of possibility but stretches credulity. We eventually know why this seemingly innocuous detail is offered up early on but it doesn't convince. Plus, the private equity firm is swirling in disaster throughout the play and on the brink of collapse. Money is fleeing left and right and the only potential source of new funds is questionable at best. When Seth sees the possibility of jumping ship and working with Jeff at this luggage company, it's presented as a complete risk for him, rather than the lifeline it might actually be.

Ultimately, Dry Powder enlivens some painfully real issues with humor. But it's hard to feel genuinely engaged with a morality play when everyone in it is so determined to be immoral. The show is bracketed by that speech Danes is going to give to NYU finance students. At the beginning, she's delivering the highlights to her boss. At the end, she's actually giving the speech. Her monologue -- which should be revealing and biting to us -- simply reveals this paper thin character is just as clueless as ever. We're none the wiser about how an actual flesh and blood person might actually feel and, thus, we're ultimately as unmoved as Jenny by the drama around her.