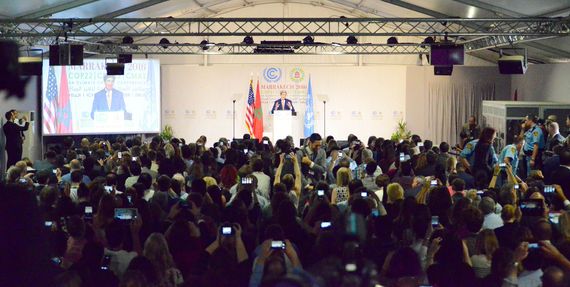 My message to my international colleagues -- and their message to me -- is straightforward: progress must continue because the climate change problem is both severe and urgent, and the wind is at our backs.

As the State Department's Special Envoy for Climate Change, I represent the United States during international climate change discussions - the most recent of which was the annual global meeting of the parties to the UN Climate Convention, in Marrakesh, Morocco from November 7th to the 18th this year. This gathering allows governments from around the world, with the participation of civil society and businesses, to meet and plan next steps to combat climate change. Last year, at the climate meeting in Paris, world leaders made history when they adopted the strongest climate change agreement ever negotiated - an agreement that took effect last month, more rapidly than any previous global environmental agreement in history, thanks to global cooperation and a shared sense of urgency.

With the Paris Agreement in place, the focus this year in Marrakesh was on further developing the nuts and bolts of the agreement to promote rapid global implementation. Of course, on the second day of the conference, the United States elected a new president from a different party -- so it was no surprise that participants at the Marrakech meeting turned their attention to what steps the incoming U.S. administration might take on international climate policy.

While I cannot speak for the president-elect's team, my message to my international colleagues -- and their message to me -- was straightforward: progress must continue because the climate change problem is both severe and urgent, and the wind is at our backs. Thanks to our recent progress, the world is now marching steadily toward a low-carbon future.

What does that mean in practical terms? For one, it means that a diverse group of global stakeholders - businesses, national governments, non-profits and universities, and so many others - are embracing the transition away from carbon intensive energy and toward an economy built on clean energy technologies.

Action on climate is now a measurable, demonstrable reality around the world. In the last year, we've seen that message embraced at every level of government and civil society - and explicitly reaffirmed by all nations in Marrakesh after the U.S. election.

The numbers further attest to global action. According to Bloomberg New Energy Finance, the best source for commercial information on this subject, 2015 set a new record for renewable energy, attracting a record $329 billion in global investment (having grown 600% since 2004) - and it was also the highest ever for installation of renewable energy power capacity. These statistics are expected to continue to pile up. According to the International Energy Agency, renewable energy technologies are set to attract a cumulative total investment of $7.4 trillion by 2040.

At the same time, prices for renewable energy are falling dramatically around the world, which means the same level of investment generates ever more installed capacity. Utility-scale solar costs in the United States fell by 64 percent since 2008, with prices for wind energy falling by similar margins. A competitive market for renewables is increasingly the norm in many parts of the United States and the rest of the world. The private sector is responding, seeing an opportunity in the increasing demand for climate-resilient infrastructure, cities, and energy systems.

We've also seen the political momentum behind fighting climate change expand and deepen in the months since the Paris Agreement was adopted. This is partly because the risks of climate change are becoming more apparent - from the increasing frequency of extreme storms, floods, droughts and wildfires to more coastal flooding due to sea level rise to declines in food production. Just this week, for example, I attended a meeting in Mexico City with mayors from around the world to discuss new steps to respond to climate impacts within their cities. The world has taken the first steps, but we still need to do more in the years to come - as part of the international framework for cooperation and accountability created by the Paris Agreement.

These are the realities of a global community that's made a clear choice to act on climate and build a safer, more prosperous future for generations to come. And while there is much more to do, these facts give me a sense of optimism that the world will continue to march toward a low-carbon future.