For more than half a century, scientists have known about the Van Allen radiation belts -- two doughnut-shaped rings of charged particles that encircle the earth. So it came as quite a surprise last fall when particle-detection instruments aboard NASA's recently launched Van Allen Probe spacecraft revealed the existence of a third, previously unseen ring of radiation.

"We started wondering if there was something wrong with our instruments," Dr. Shrikanth G. Kanekal, deputy mission scientist for the probes at the agency's Goddard Space Flight Center in Greenbelt, Md., said in a written statement. "We checked everything, but there was nothing wrong with them. The third belt persisted beautifully, day after day, week after week, for four weeks."

Scientists already knew the Van Allen belts wax and wane in response to energy from the sun. But what caused this third, so-called "storage" ring to appear? And what caused it to vanish a month later? At first scientists didn't have a good explanation. But a new study provides one, and it's a doozy.

First, the sun unleashed a huge burst of charged particles known as a coronal mass ejection, or CME. The CME "compressed, distorted, and eventually ripped away a huge portion of the outer Van Allen belt, leaving a mere remnant of the pre-existing radiation zone," study co-author Dr. Daniel N. Baker, director of the University of Colorado's Laboratory for Atmospheric and Space Physics, told The Huffington Post in an email.

The outer ring reformed, but then a month later an even stronger CME "ripped away essentially the entire outer Van Allen zone, including most of the storage ring," Baker wrote in the email. "The Sun giveth (so to speak) and the Sun taketh away." 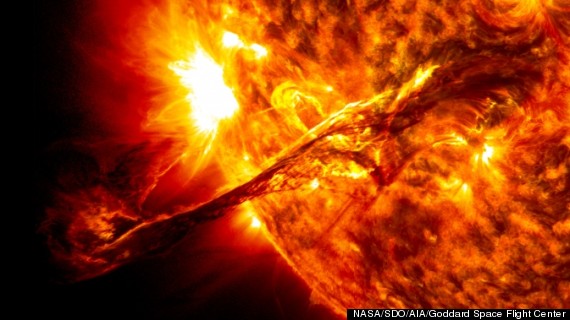 This NASA image shows a giant solar prominence before it erupted on Aug. 31, 2012. The event, which sent out particles and a shock wave, may have led to a third radiation belt that appeared around the earth a few days later.

The third ring appeared on September 2 and disappeared on October 1, Physicsworld.com reported.

The short-lived third ring was made up of electrons moving at nearly the speed of light. These so-called ultra-relativistic electrons are similar to the charged particles that make up the outer Van Allen belt but are driven by very different physical processes, study co-author Dr. Yuri Shprits, a research geophysicist at UCLA, told HuffPost Science in an email.

"I believe that, with this study, we have uncovered the tip of the iceberg," Shprits said in a written statement. "We still need to fully understand how these electrons are accelerated, where they originate and how the dynamics of the belts is different for different storms."

The sooner scientists can gain a fuller understanding, the better. The high-energy particles that make up the Van Allen belts are known to be extremely hazardous to spacecraft and astronauts.