Seven days, lots of science in the news. Here's a roundup of some of the week's most notable and quotable items: 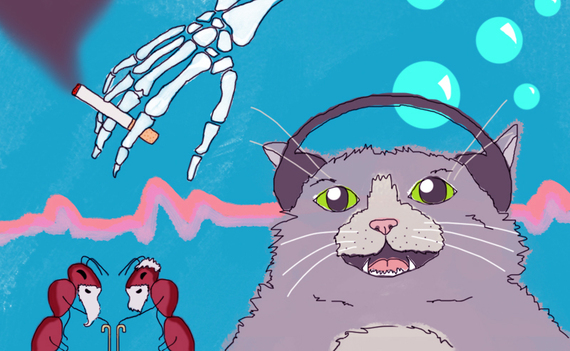 Cats prefer listening to music that's made for them--with the same frequency range they use to communicate and a tempo similar to purring.

Scientists managed to capture an image of light that shows it behaving as both a particle and a wave at the same time.

This may be the tiniest living thing ever captured in an image.

A volcano in Chile erupted spewing lava with a vigor not seen in 20 years and possibly helping produce "shocking" lightning.

Climate change may have helped to spark the Syrian civil war.

A whopping 60 of ~760 plants in the Everglades are at risk, a new study finds. Biggest culprits: poaching and climate change changes.

The last ice age was too cold even for emperor penguins.

A 2.8-million-year-old jawbone unearthed in Ethiopia suggests that members of the human genus (Homo) arose in East Africa nearly half a million years earlier than previously thought.

In the jungles of Honduras, archaeologists discovered the fabled "White City," built by a culture contemporaneous with the Maya but somewhat lost to history.

Heartening news in the search for extraterrestrial life: a molecule found on Saturn's moon Titan might be capable of organizing itself into structures similar to cell membranes.

Mars may once have had a body of water larger than the Arctic ocean.

Kids, on average, catch the flu every other year; adults over the age of 30 really only catch it about twice a decade.

Two out of three regular cigarette smokers will die from smoking-related conditions.

The life of a worker ant is reduced to a tenth of its normal span if the ant is raised in isolation.

Researchers found brain cells in monkeys that were involved in predicting another monkey's moves in a cooperative game.

Sophie, the stegosaurus at the Natural History Museum of London, weighed an estimated 3,527 pounds in life.