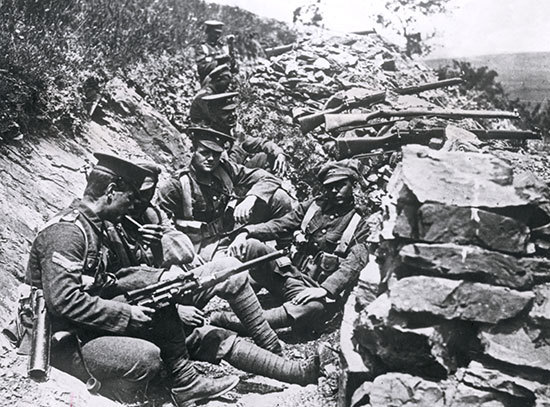 British troops on the Salonika front, 1916 The Balkan Front was a 900-mile front that stretched from the Isonzo River valley in northeast Italy to the Romanian Black Sea coast. The front consisted of a series of largely separate campaigns. It began with the Serbian Campaign, first between Austria-Hungary and Serbia, and then a second Serbian Campaign that saw Austria-Hungary and Bulgaria both invade Serbia. It expanded to include the Romanian and Bulgarian campaigns as well as the largely independent Italian campaign in the Trentino and Alto Adige. Eventually the various campaigns all coalesced around what came to be called the Macedonian or Salonika Front. In the process it drew in both Greece and Romania on the Allied side and Bulgaria on the side of the Central Powers. In addition, the major combatants, Great Britain, France, and Austria-Hungary and, to a lesser extent, Italy, the Ottomans and Germany, all contributed significant numbers of troops to the forces arrayed on the Macedonian Front.

Ostensibly, the purpose of the Balkan campaign was to sever the Berlin to Constantinople railway and to cut off the Ottoman Empire from support by either Austria-Hungary or Germany. A secondary consideration was to relieve pressure on Russia on the Eastern front by tying up large numbers of Austrian-Hungarian troops in the Balkans. Finally, in the event of a dual breakout on both the Balkan and Eastern Fronts, the two Allied armies would be able to encircle the Austrian-Hungarian armies in a broad enveloping movement and destroy them. In reality none of these objectives came to pass and the Balkan Front became yet another stalemate between the Allied and the Central Powers.

The Serbian front saw the first outbreak of conflict in World War I when Austrian artillery shelled the Serbian capital of Belgrade. The subsequent Austrian-Hungarian invasion of Serbia was repulsed by the Serbs, which gave the Allies their first battlefield victory of the war. A joint Austrian and Bulgarian campaign in 1915 saw Serbia again invaded, this time from both the north and the east. Against the renewed onslaught, the Serbian Army steadily retreated eventually making its way to the Albanian port of Durazzo where they were evacuated by a joint British and French task force. After additional training and rearmament they were deployed in Macedonia where they participated in the Macedonian/Salonika campaign. 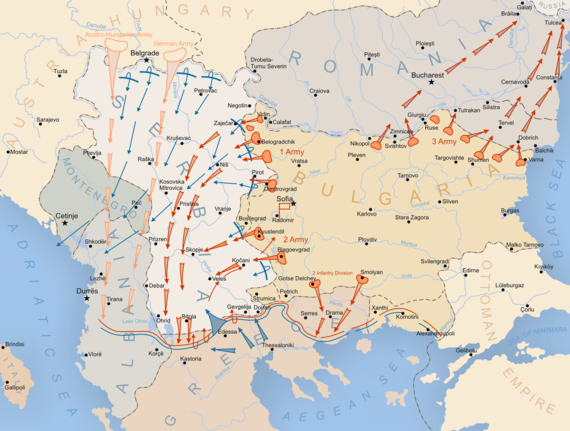 Bulgarian campaign, Balkan Front 1915-1918 In 1914 Romania had been formally allied with Austria-Hungary, but when war broke out the Bucharest government had declared its neutrality. Over the summer of 1916, in response to inducements by Great Britain and France that they would support the Romanian annexation of Transylvania from Austria-Hungary, as well as in response to long standing enmity between Romania and Bulgaria, Romania joined the war on the Allied side. The war proved to be a total disaster for Romania. Between August and the end of December 1916, a combined Austrian-Hungarian, German, Bulgarian, and Ottoman force had overrun the regions of Wallachia and Dobruja. More than half of the Romanian army had been captured and an unspecified number killed.

Following retraining under a French Expeditionary force commanded by General Henri Berthelot a resupplied Romanian Army, supported by elements of the now disintegrating Russian Army, were able to contain the German drive on Moldova in 1917. The Treaty of Brest-Litovsk and the German advance into the Ukraine left Romania entirely surrounded by the military forces of the Central Powers. Facing certain destruction, the Bucharest government signed the Treaty of Bucharest in 1918 and withdrew from further involvement in World War I. Following the successful offensive on the Macedonian Front that knocked Bulgaria out of the war, Romanian reentered the war of the Allied side on November 10, 1918; one day before the general armistice was announced.

Italian forces had intervened in the Balkans even before Italy's entry in World War I. In December 1914, Italy had occupied the port of Vlore in Albania. After it entered the war, Italy expanded its occupation to include southern Albania and northern Epirus. It also organized an army of Albanian irregulars to supplement its own forces. Additionally, the Italians contributed troops to the joint Allied force on the Macedonian front.

In the northeast, Italian forces fought a series of bloody battles to seize the Isonzo River and advance into Dalmatia. Italian troops continued their campaign even after the Armistice was announced on November 11. They finally stopped on November 18 with the seizure the city of Fiume and promptly announced, in accordance with the provisions of the 1915 London Treaty, that they were annexing this newly conquered region of Dalmatia. 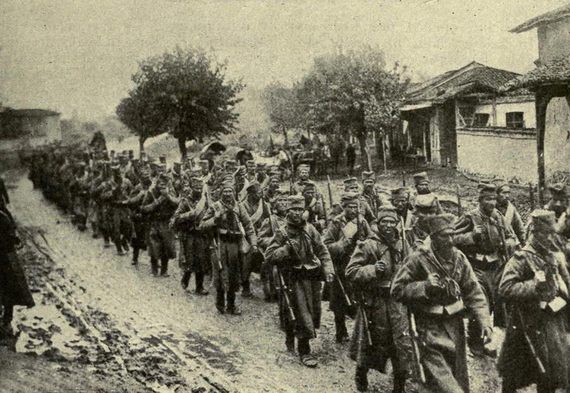 Serbian troops marching to the front line against the Austrians Bulgaria had historically been at war with the Ottoman Empire and closely allied with Russia. Disappointed at the lack of Russian support during the Balkan Wars of 1912 and 1913, Bulgaria gradually moved closer to the Central Powers even if that meant it was now allied with the Ottomans, their traditional enemy. The historical rivalry with Constantinople notwithstanding, Sofia now had more substantial claims over the predominantly Bulgarian populated territories in Serbia, Greece, and Romania, all three of which were now aligned with Great Britain and France.

Bulgaria, which already had the largest army in the Balkans, scored a quick series of battlefield triumphs, occupying much of southern Serbia, taking the region of Dobruja from Romania, and advancing into Greek Macedonia. Bulgarian popular support for the war waned rapidly, however, as a result of the extreme economic dislocations caused by the fighting. The Russian Revolution in February 1917 ignited similar sentiments in Bulgaria spreading antiwar and anti-monarchial support among the military and civilian population.

In 1915, in response to the collapse of Serbian forces against the combined Bulgarian and Austrian-Hungarian offensives, a joint British-French-Italian force had landed at Salonika, modern day Thessaloniki, to reinforce Serbian forces as well as to establish a base of operations against pro-German Bulgaria. Reinforced by the remnants of the Serbian Army, as well as troops withdrawn from the Allied campaign in Gallipoli, the new front stabilized along the northern Greek border with Macedonia and was referred to as the Macedonian front, although the term Salonika front was used interchangeably. 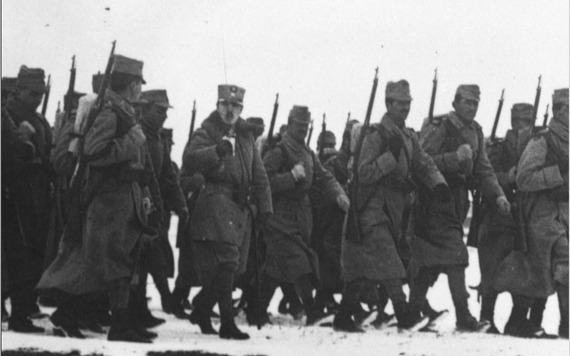 Romanian troops on the march, November 1918 In September 1918, after a prolonged buildup, a joint Allied army consisting of a mix of Italian, British, French, Greek, and Serbian forces, under the command of French General Franchet d'Esperey, broke through along the Macedonian front and began to advance. Bulgarian forces stopped them in Dojran before they could physically occupy any historic Bulgarian territory. By October 1918 they had liberated Serbia and were poised to invade Hungary. The offensive was halted when the Hungarian government offered to surrender and by the subsequent Armistice of November 11.

Notwithstanding the victory at Dojran, The Bulgarian Tsar Ferdinand was forced to sue for peace, however, and he agreed to abdicate in favor of his son Boris III. Under the treaty of Neuilly signed in November 1919, Bulgaria lost its Aegean coast (western Thrace) to Greece and nearly all of its Macedonian territory was incorporated into the new state of Yugoslavia. In addition it had to return Dobruja to Romania.

The Balkan Front was a relatively minor theater of World War I. No epic battles were fought there, and there were no events that impacted the larger conduct of the war on either the Eastern or Western Fronts. The strategy of using it as a launching point for a general offensive into Austria-Hungary, and to coordinate the advance with a similar breakout of Russian troops on the Eastern front, was sound military logic, but after 1915, Russian troops on the Eastern front were unable to stage a broad breakout and the troop strength on the Macedonian front was never sufficient to stage their own breakout and create a credible pincer movement against Austrian-Hungarian forces until 1918. By then Russia was out of the war and the war on the Eastern Front had long since been settled.