There was a flurry in our office yesterday when Chris Matthews accidentally mixed up "Obama" and "Osama" on Hardball. Matthews was having a discussion with Andrea Mitchell and Chuck Todd about Charlie Black's now-infamous comment that John McCain would benefit electorally from a terrorist attack. Then, he made The Slip.

Here is a fact of life: If you are having a conversation with someone about Barack Obama and Osama bin Laden, and one is typically referred to as "Obama" and the other is typically referred to as "Osama," there is a very good chance that someone will slip up somewhere. It does not make that person a racist. It does not mean that person is secretly trying to spread rumors that Barack Obama is a Muslim. All it means is that someone said one name that sounds a lot like another name, in a conversation in which both names were implicated.

Or even if they weren't! Another example from our office: Shortly after the Obama-Osama dramarama, Pat Buchanan appeared on Hardball, since apparently he is living in the 30 Rock studios now. I commented to the room that he'd gotten into a feisty debate with Nixonland author Rick Perlman on Morning Joe that morning. A co-worker added her own two cents, except they were about some guy named Pat Robertson. Oops! Those hard-right conservative fellows all sound alike!

(Also, the Nixonland author's name is Rick Perlstein, not Rick Perlman. It's also not Ron Perelman or Richard Perle.)

I trust you are getting my point. What all this says to me is that we need to chill out. Poor Chris Matthews looked stricken after he said that, possibly because it's not the first time the old Obama-Osama switcheroo has shown up on Hardball . But honestly, it's really no big deal. If he says that he gets a thrill up his leg every time he watches a bin Laden tape, fine. Go for the jugular. But there are gotchas that matter and there are gotchas that don't, and this falls firmly into the latter category. 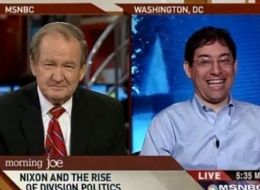 For those of you who insist it matters, well then, fine — go ahead and call me a racist. Because when I saw Ron Allen at the Hillary Clinton farewell speech, I said to someone "Oh, there's Ron Mott." Here's what they have in common: They are both NBC correspondents, they are both black. Here's what they don't have in common: what they look like. They look about as alike as Kelly O'Donnell and Norah O'Donnell — but still, I confess I've mixed up their names before, too.

Did you let me off the hook there? Thanks, but here's another chance to call me a racist: Yesterday watching ABC News, I totally heard Jake Tapper talking about how Barack Obama was trying to connect with Whitey. He did! I heard him! He said, "Barack Obama says his Christian faith will help him connect with Whitey vangelicals who traditionally vote Republican." I am not making this up - it's what I heard, and I found it so amusing I rewound and wrote it down. He said "white evangelicals" at another point in the segment, and I heard "Whitey" again. So Jake, please learn to talk.

I am proud, at least, that I've never confused Joe Scarborough with Chuck Scarborough, though I have heard others do so. Also, I'm pretty sure that the anchor of "NBC Nightly News" did not make a name for himself singing happy-go-lucky songs about surfing, nor did he spend a year in bed. But I can't count the number of times I've heard Brian Williams referred to as Brian Wilson. Someone did it recently, actually, I can't quite recall — it was either the president of CNN or that columnist from Time.

Okay by now I'm really sure you get my point — words sound alike, and some of them are innocuous and some of them are highly charged. Sometimes, they will be confused on-air — but let's not confuse that confusion with what actually matters, like Barack Obama's middle name.

P.S. As I typed the first paragraph of this post, I decided to add in the names of the panelists on Hardball with Matthews, and typed in "Andrea Mitchell" and "Charlie Todd." True story.

P.P.S. For the record, I have never confused Osama bin Laden with David Folkenflik.