Count on the Twittersphere to pick up on small details. After Time magazine hit newsstands this week with a Hillary Clinton cover story, a number of users have noted that the former secretary of state appears to be sporting horns.

@mlcalderone @Heminator The horns on Mrs. Clinton's head are a nice if inadvertent touch.

As Hunter Schwarz at Buzzfeed has noted, this is actually a common problem for the 92-year-old news weekly: it happens whenever a figure pushes up against the strokes of the "m" in "Time."

As Time's editors noted in a short post, the magazine has in the past been accused of suggesting Bill Clinton, George W. Bush, Margaret Thatcher, and Pope Francis are devils, too:

There was some hubbub online Thursday over TIME’s latest cover, which appeared to show Hillary Clinton sporting a set of horns. (This sort of thing has happened before.) Given the shape of the letter “m” in the magazine’s name and its location on the cover, many other subjects in the past have also appeared to sprout extra features (in fact this happened to Hillary Clinton at least once before. Same goes for Bill Clinton. George W. Bush too). Check out everyone from Margaret Thatcher to Pope Francis to Jesus to Darth Vader who have received the rough end of TIME’s “horns.” Any resemblance to cats, bats or devil horns is entirely coincidental. 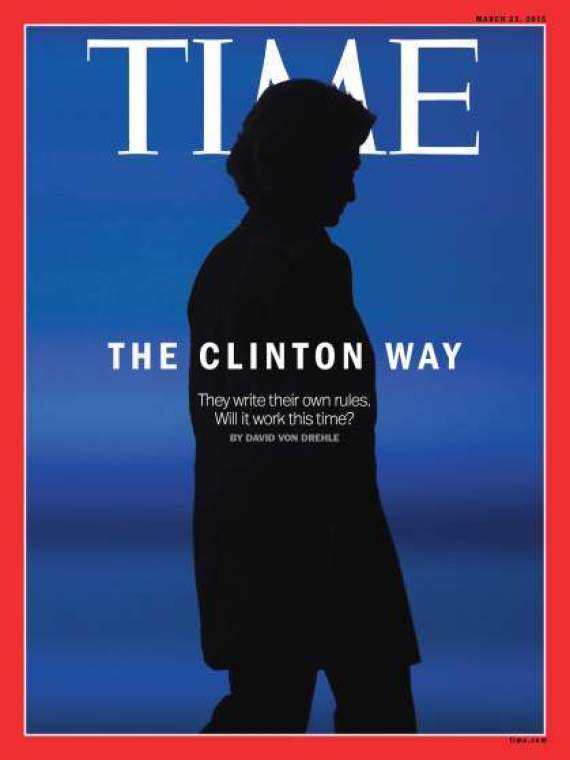