At a holiday lunch, the subject of Christmas timesavers just happened to come up. "I didn't do a tree last year and it saved days!" I told my friends proudly. "When Christmas was over, we just walked out of the house and went on vacation. I didn't have to get undecorated in time for the Boy Scout tree pick up!" As if I hadn't spoken, every woman at that table announced that she had made the transition to an artificial tree. My friends, five of them, all with artificial trees. They come with lights already on them -- both white and colored! They look real! They come with little pine smell sticks so you don't notice that it's plastic and not fir! They were on sale at Costco! They had two sizes: 7 1/2 feet and 9 feet. "Get the shorter one," they all advised. I left before dessert.

Okay, this would be a little more work than no tree, but it still would save time and trouble. No putting on lights! No going out to buy the tree in future years! No vacuuming needles! No buckets of water all month! No worrying about the Boy Scouts and their inflexible schedule! We could leave it up till spring -- or even next Christmas! All I had to do was buy it once and throw on some ornaments. I made a beeline for Costco.

Almost from the entrance, I could see the tree lights flashing from white to colored -- back and forth -- the grand kids would love this! How could I have even considered not getting a tree? What was I, Scrooge? Think of the delight on my little grandson's face! And after all, I already had the ornaments.

I shoved my cart through the crowd to get to the trees. All they had was the 9 foot tree, and only two at that. The boxes looked awfully big, but we could fit almost anything in the back of the SUV. I should know how tall our ceilings are, but I didn't. I rushed home to measure. Of course, I couldn't find a tape measure, so I got an umbrella, estimated its length by placing 11 inch sheets of paper along it, and held it above my head. It looked like the ceiling must be nine feet--close enough. Then I called my husband Jerry and told him he had to leave the office immediately to get one of the last two trees. Costco had told me these were the only two in Portland at any store. Hurry! It was 4:00, and our son Kris, wife Emily and little Henry were coming for dinner at 5:00. Just enough time to get the tree and come home for dinner.

The kids arrived, and somewhat apologetically I told them that we were getting an artificial tree. They had just cut down their own Frasier fir, and we had long wrinkled our noses at "fake" trees. But, I pointed out, at least this year we would have a tree. Sort of a tree. So we started into the hors d'oeuvres and waited for Jerry and the tree to arrive. 5:30, 6:00... I called him. It was not a joyous conversation. Jerry was in the parking lot of Costco, dismantling the interior of our new Escalade to make room for the tree box. This involved some reading of the manual to find out how to make the seats both go down and slide forward. Kris offered to drive down and help, but Jer was getting close, so he would see us soon. 6:30, 7:00... We call him again. He finally has the car seats organized, but has spent countless minutes wandering around the parking lot trying to find someone to help him lift the box in the car. It is gynormous. Kris offers to drive down, but Jer has finally found a Good Samaritan and is about to leave.

7:30 -- Jerry is home. Kris helps him bring in the tree and we hope he (Jerry) won't notice that the hors d'oeuvres are more or less gone. The box is so huge (roughly five feet by three feet by three feet) that it barely fits in the house.

After dinner, we open the box and throw the tree together. Only five pieces, all numbered, and you just stack them and plug it in! This part is easy, just as promised. Only problem is that it doesn't quite fit. It's little head is bowed against the ceiling. Will have to strap the angel to the side of the tree as she will never make it on top. Oh well, nothing too serious. "I think it's too big." says Jer. "Never fear," I tell him. "When it's decorated, it will look great."

"Do we have enough ornaments?" Jerry asked. "Of course!" I answer. " In the old house we always had a nine foot tree, and they were always fatter than this one!"

I can hardly wait for morning to decorate the tree. Jerry left for an early tennis game and was then going to the office, so I plan to surprise him and have it all done. First I go to the garage for all my boxes of ornaments. I find two. Belatedly it occurs to me that I gave our son and daughter each a third of the ornaments when they got married. I also donated all my "filler" ornaments (the ones you stick in the back) to Goodwill when we downsized. I had planned to get a smaller tree, except then I had no tree at all. And now I was back to nine feet. Hmmm. But this tree was pretty thin.

I stare at my paltry collection of ornaments. Carefully, I hang them somewhat evenly around the tree. There are humungous gaps. I stare at it. I go back to the garage and search for more ornaments. None. What kind of an idiot donates all her filler ornaments? This tree looks empty, not gorgeous.

It needs color. I head for Michael's, and move up and down all the Christmas aisles gathering dozens of red balls, red bows, all their remaining red ribbon for more bows, extra hangers, gauzy ribbon, glitter pine cones, some red berries.

Home again, I go into hyper-decorating mode. I make 50 little red bows, a big gauzy gold one for the top, and then I hang everything on the tree. It looked less empty! Then Jerry arrived. He takes one look, and says we need the 7 1/2 foot tree. "But they don't have any at Costco," I remind him. "Maybe one came back," he replies hopefully. He forms this idea that we will scour all the stores until we find a smaller tree, then we will take all the ornaments off this one, laying them carefully on trays. Take out this tree, return it to Costco. Bring in the shorter tree, and then put all the ornaments back on it. I see days of work, mountains of stress, dancing before my crossed eyes.

"Furthermore," said Jerry with finality. "How would we ever deal with the giant box it came in? The garage is still packed with all the things we did NOT donate, so where will we store the damn thing, and who will get it in and out of whatever that place is?" We are both thinking not me. "But," I try, "Who says the 7 1/2 foot tree box is more manageable?" "The tree is shorter and narrower!" says Jerry emphatically. I was never very good at geometry.

We call Costco, Home Depot, Eagle Bargain Outlet, and Lowes. Naturally, they don't answer the phone, so we go. We drive to every store. They are sold out or the trees are defective. The lights don't work; they are only white and don't flash; the needles are paper and cheap looking. I am near tears, but Jerry is relentless. "Let's just take it back and get a short one next year," he suggests. "One more store," I beg. Now I have to have a tree. My grandchildren need a tree! They should be delighted when they come for Christmas. How did I ever think I could get by without a tree?

Our last stop is Lowes. They have a 7 1/2 foot tree! It has lights that flash from white to colored. I feel the needles. Some feel like fir, some feel like paper. It is almost as good as our tree, but not quite. It is a strange, unnatural green. I have to admit the box looks much more manageable, but I don't love the tree. And then my eye falls on a stack of red canvas bags--with wheels!--and the sign that says: Artificial Tree Storage Bags! For either a 7 1/2 foot or 9 foot tree! "Jerry!" I shout. "Let's just get this bag!!! Then we can keep the tree, and throw away the terrible box!" "But isn't the tree too big?" he asks. "It looks empty, we don't have enough ornaments, we're downsizing, it would be stupid to run out and buy more Radko now! I'm 76 years old!" "It's okay," I answer calmly. "I still have more ribbon. Bows! I can make endless bows! It will be perfect." 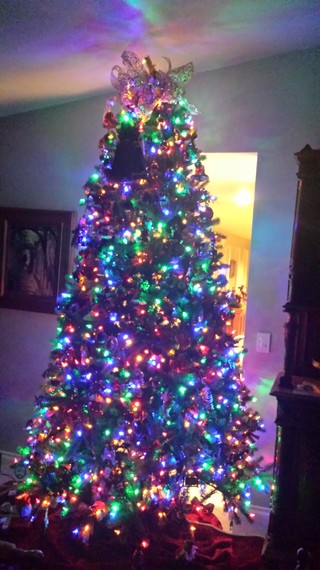