A 2012 promotional video by John Deere opens with a reverent pre-dawn exposition of the midwestern farmhouse of the future: angular, modernist exterior; miniature green tractors lining a dark wood chest of drawers; family photos cycling across the screen of a computerized picture frame.

Enter: the farmer. Mustachioed and blue jean-clad, he helps himself to a stainless steel cup o' joe before touching his fingertips to a digital interface displayed on his hallway wall. The tranquil female voice of the interface greets him by name: Terry Greene.

Moving into an adjoining study, Farmer Terry plunks himself down at a smart-desk, which appears to be activated by his coffee cup. Following prompts from the interface's firm yet soothing tones, Terry prioritizes a field work order, responds to a dry field alert, and implements a new "prescription" from his crop advisor. It's not until two minutes and thirty-six seconds have elapsed of the nearly six minute video that we get our first glimpse of Terry's actual farm: steely clouds gathering over a leafy, emerald monochrome that stirs gently in an otherworldly breeze. There isn't a human in sight.

Despite an atmosphere that evokes the movie "Her" as rewritten for a post-apocalyptic Iowa, the video, titled "Farm Forward," manages to present a number of intriguing technological innovations. All of Farmer Terry's devices are synced to the same operating system, which also serves to aggregate his records and compliance proceedings. He can communicate with his extensive entourage of support specialists at the flick of a finger, and adjust his operations according to their advice just as easily. In the only shot where we see Farmer Terry on the ground in one of his fields, he uses his smartphone to scan soil and leaf samples, presumably for analysis by some software included in the advertised John Deere Farm Sight system.

All of these tools enable Farmer Terry to outsource many of the traditionally subjective "data processing" components (what some might call "judgment calls") of agriculture to a quantitative algorithm. The result is a farm as sleek, clean, and shiny as a Macbook Air.

This is exactly the kind of fantasy that makes agrarian philosopher Wendell Berry's hair stand on end. In "Living in the Future: The 'Modern' Agricultural Ideal," Berry describes the American obsession with the future in tones acid enough to corrode the enamel on your teeth. He characterizes this obsession as a "strange, almost occult yearning," and fears the world that it conjures into being.

"The future is the time when science will have solved all our problems, gratified all our desires; when we will all live in perfect ease in an air-conditioned, fully automated womb," Berry quips. "When all the work will be done by machines so sophisticated that they will not only clothe, house, and feed us, but think for us, play our games, paint our pictures, write our poems."

Responding to an article published by Grist, a recent tweet echoes Berry's sense of loss: 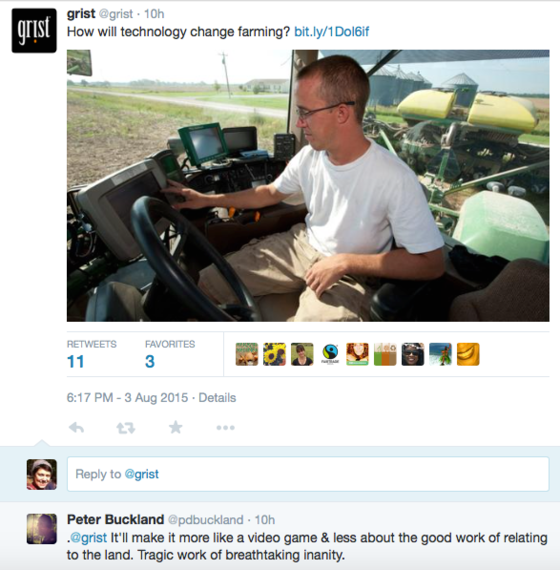 @pdbuckland's fear--and Berry's--seems to be that technology will trivialize the craft of agriculture by subjecting farming to a regime of what Berry calls "technological totalitarianism." Instead of "the living substance of farming--the complexly, even mysteriously interrelated lives on which it depends," Berry warns that food production will be reduced to a machine--something like the sleek, clean, and shiny model promoted by John Deere. A "tragic work of breathtaking inanity."

In a different article for Grist, staff writer Nathaniel Johnson laments the dismissal by Berry and his disciples of all technology as dangerous and all who use it as unthinking cogs in the agri-industrial machine. "We're used to thinking of two separate and oppositional forms of farming: One that uses technology to suppress nature, and another that works in low-tech harmony with nature," he writes. "But in reality, it's not two separate paths--it's a spectrum."

Jeff Gordon shares Johnson's perspective on technology. Gordon is CEO and Co-founder of AgSquared, a software package designed to assist small, diversified farmers with record-keeping and planning. "When you have a farm with not very many hands and you're growing maybe forty crops and you're one farmer with maybe two helpers, things can get pretty chaotic," Gordon says. AgSquared helps translate the chaos into something manageable.

There is a real need for this kind of innovative service. In an Op-Ed for the New York Times, Connecticut oyster farmer Bren Smith describes the state of small-scale farming in twenty-first century America. The back-breaking labor, the grindingly long hours, the gnawing fear of bank statements etched in red. Berry's vision of agrarian life is beautiful, but it does not admit this reality: that farming is hard. And maybe more people would do it--and keep doing it--if it could be made just a bit easier.

Appropriately-scaled technology like AgSquared might be one way to approach this goal. But, Gordon cautions, "Technology is not an end, it's a means to an end." This sentiment is in line with a distinction drawn by Johnson, who writes, "Some technologies help farmers take control of their destiny, while others give some of that control to big corporations." Gordon advocates for the former: technology as a tool to help farmers do their jobs even better.

So does Danielle Gould, Founder and CEO of Food + Tech Connect, a web platform dedicated to lowering the barrier to success for businesses spanning the food world. "I think that farmers have a lot to gain from adopting technology," she says. In particular, she highlights platforms that link farms with customers, allowing farmers to diversify their sales beyond farmers markets. "If you don't have to spend time going to a farmers market and you can spend that time on your farm," she muses, "that's huge."

Gould thinks we're on the cusp of a new revolution in agriculture--an IT revolution. Data aggregation and sharing platforms make information accessible to a much broader audience, which, Gould thinks, is going to come in very handy. "A main challenge that we're going to have to face moving forward is that we have an aging population of farmers that know how to grow food, and that's not something that's easy to pass along from generation to generation." Information technology like AgSquared, she believes, can help ease these transitions.

For a price, that is. AgSquared's most basic package costs $99 a year; upgrading to "Plus" brings it to $299, and "Premier" jumps to $799. This is a new kind of expenditure for small scale farmers who are used to handling planning and management, free of charge, in their own heads. But it's easy for things to fall through the cracks when the only record is a mental one, and it's hard to effectively transfer that record to another person. Ag IT might require some tweaking of the budget, but, Gould says, "It's an investment in the future."

That's a future which appears increasingly unstable, as climate change reduces the predictive capacity of historical norms. "It's not the same climate that you've dealt with for the last forty years," Gould says of farmers who rely on decades of experience to inform their choices. Instead, a July 23, 2015 editorial in Nature addresses the need to prepare farms for climate change, calling for "carefully crafted regional case studies, informed by locally sourced data" to generate "plausible future scenarios from which local planners can draw a range of tailored adaptation options." Some of those local planners will be farmers, and some of that locally sourced data could come from their farms.

Gould is excited about the potential of "low-cost sensor technologies" to expand the ways that farmers can respond to changing conditions. These sensors transform farmers from passive recipients of information (by way of land grant universities, ag-extension services, agribusinesses, etc.) into active collaborators in the generation of intensely local data. It's a paradigm shift, enabling the co-production of a much more finely-grained body of agricultural knowledge.

This kind of IT could also help farmers run their operations more responsibly--especially at a very large scale. "Precision agriculture" refers to an approach not unlike that depicted by John Deere in "Farm Forward." By gleaning information from drones and on the ground sensors, farmers can create fertilization and irrigation plans with a much higher degree of specificity, reducing waste and runoff. It's a version of conventional agriculture that is, at least in theory, a good deal gentler on the environment.

Proprietary, data-based technologies aren't the only ones coming down the creative pipeline. Turning to skill and infrastructure development, Marcin Jabukowski and his collaborators at Open Source Ecology aim to generate open source blueprints for "a set of the 50 most important machines that it takes for modern life to exist," what they're calling the Global Village Construction Set. Many of these machines are agricultural, and the OSE blueprints allow farmers to build their own tractors, for example, at a fraction of, say, John Deere's going rate. For farmers who don't know how to fabricate their own machinery, OSE offers workshops to help them learn.

Instead of calling for the rejection of modern agricultural technology, OSE calls for a reimagining of our relationship with it. "I think that the middle ground is powerful machinery," Jabukowski says, "except they are open source and therefore controlled by people, not by organized monopolies." The idea is to distribute knowledge in such a way that upends the conventional power imbalance of technological development, encouraging more efficient--and more democratic--innovation without a patent. Collaborative, DIY machinery to go with collaborative, DIY data. Sounds almost Berry-esque.

But even technology proponents like Jeff Gordon and Danielle Gould are careful not to whitewash technology's potential impacts. "In every industry right now, technology is replacing part of the workforce. I think that's going to happen [in agriculture] too," Gould allows. But, she says, "It becomes a choice." We can choose to pursue technologies that enable the kind of farming we want. Or we can choose to farm differently, in order to engage with the kinds of technologies we want, to the degree that we want.