I've had to write this list so that my four kids - whose ages range from 9 to 15 - understand what I'm saying.

They're an intelligent bunch, but even I am capable of recognising that as a dad in my late thirties, I have reached the middle stage between understanding everything (or at least feeling that way) as a teen, to not remembering what day it is. This is something my elderly mum does far too often, and normally when she's calling me by the dog's name.

Sometimes as parents we say what we mean. Other times, we say something and expect you to know what we mean. It's not fair, but hey, that's a life lesson right there.

1) iPod. This means iPod. Or iPad. Or iPhone. Sometimes it could mean your Android tablet, smartphone, mp3 device or even your camera. There's too much technology and too many silly names. We can't keep up.

2) Maybe. This means no. In fact, it means "I'm not going to agree to what you've just asked as there's no way on Hell I'll let you do that, but I know that saying no to you will just cause some kind of verbal backlash or result in a mood of teenage proportions that I can't be dealing with right now.

If I say maybe, I mean no. You know I mean no, (but we both know there's enough ambiguity there to avoid falling out over it.)

3) Now. A reference to time and importance. If something needs doing now, it's generally something that was supposed to be done already but hasn't been done. Hence it needs doing "now".

4) NOW! Similar to above, but more shouty. This version of now may also come coupled with threats.

5) 15 minutes until we leave. Don't be fooled into thinking that 15 minutes means 15 minutes. If you are engaging in something we find dull, such as soft play Hell, then "15 minutes" is likely to be as long as it takes us to pack away the Kindle, collect the various coats and shoes that have been kicked off, and round you all up in a manner akin to a sheepdog chasing sheep.

If it's something we happen to enjoy, or if it revolves around putting off something that we don't want to do, then "15 minutes" will probably be as long as it takes us to come up with a new excuse as to why we don't want to do whatever it is that we're trying to avoid.

"How much longer will you be watching Orange Is The New Black, dad?" "Just give me fifteen more minutes..." 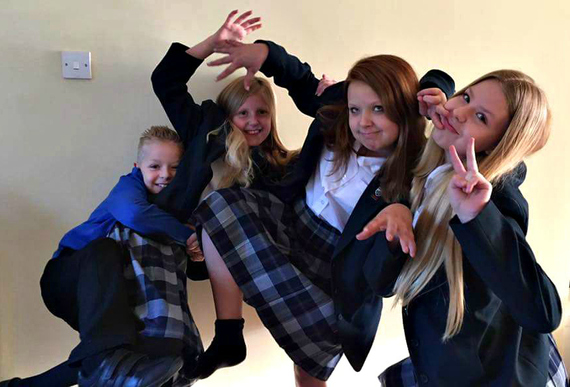 6) Thing. This could be a noun or a verb. Generally accompanied by a pointing action to indicate where the "thing" is normally kept, but is currently missing.

Sometimes accompanied by a charades-style action depicting how the "thing" is used. In my house, this generally refers to the remote control, but last weekend it meant the wash basket, and before that it meant the hairbrush. The latter was met with utter confusion by everyone as I mimicked brushing my hair, of which I have almost none.

7) "Soon". Another time-based one. Generally smartphone-based, "soon" is whatever time we have left on our smartphone battery. "My battery is at 10percent, we'll be leaving soon."

8) "I love you". This one is simple. It means that we love you, and we want you to know. It's probably brought on by a sudden fear that we don't say it enough or that you may feel undervalued. We know it can sometimes confuse you into thinking that we are dying, but it's just that we love you, honest.

9) "I love you, but..." Another one with a subtle difference. Don't be fooled into thinking that this is the same as the above. It's similar, though the inclusion of the word "but" generally means that we are about to give you a verbal dressing down for something you have done wrong that has annoyed us to point of exhaustion. It's practically a prelude to an argument.

10) "What does your mum say?" Whatever it is that you've asked us seems entirely plausible and reasonable. A decade or more of parenting tells us that this means there's something wrong. Either we have misunderstood your seemingly acceptable request, or you're leaving something out.

We could call you out on it, but we both know that will lead nowhere. Instead, we just ask this simple question.

Chances are that you have already asked mum and she had said no, so that's why you're asking us. Or maybe you haven't asked mum as you know what she will say, and you won't like the answer.

This is our way of trying to stay a step ahead of you.

This isn't a comprehensive list by any means. I do, after all, have four kids vying for attention and asking for anything from a lift to town or money through to help with their homework.

I've no doubt I can think of many more. Just give me fifteen minutes or so...

DannyUK is a dad-of-four, stepdad-of-two and boyfriend of one. He often blogs, vlogs and hogs the duvet, and only the latter isn't fully detailed online.

He can be found at DannyUK.com or you can visit him on Facebook - https://www.facebook.com/DannyUKBlog

Blogger, vlogger, tweeter. UK based, living in the heart of Essex. Generally found talking about lifestyle, parenting or techy stuff.