After spending more than a decade in the Army, I find it very difficult not to use military jargon when speaking with civilian co-workers. A few folks have figured out what I'm actually saying, but the vast majority does not understand. I should probably stop using these expressions, but after 10 years and a tour of duty in Iraq, that's unlikely to happen anytime soon. 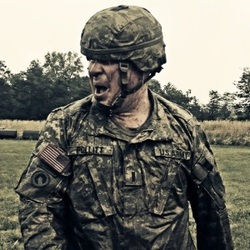 Most of the time, it's likely that the slang you hear has a positive connotation, but not always. It's useful to know whether you're receiving praise or a poke. You might even be able to surprise your veteran co-workers by dropping some military jargon of your own. So the next time your veteran co-worker drops some military slang, be in the know by reading the workplace meaning of the words below.

Ate-up: Disheveled and messy. This expression can describe behavior, work or appearance.

To beat your face: To do pushups.

Charlie Foxtrot: A clusterf***; an awful situation brought about by many mistakes made by many different people over time.

Danger-close: Too close for comfort.

Distance and direction: General instructions to get someone started on the right path.

Down-range: In a war zone.

Drug deal: The acquisition of what you want in a roundabout way.

To embrace the suck: To love when work gets tough because when it's over, you'll better appreciate the not-so-tough work that you do.

Esprit de corps: Enthusiasm amongst and for a group of people; "brotherhood"; believing in each other; unity.

Gaggle: A disorganized group of people.

To get some: To approach a task with enthusiasm and purpose.

To G.I.: To prepare something to be inspected, making sure that all the "i"s are dotted and all the "t"s are crossed.

Hoooah/hoorah: "Hoooah" is used by the Army, while "hoorah" is used by the Navy. They're spirited cries that can have dozens of meanings, but every one of them is positive. Soldiers and seamen can have entire conversations using only these two words and non-verbal cues.

Jodie: A man who's having an affair with another man's wife or girlfriend.

K.P.: A terrible, brainless task that nobody wants to do (literally "kitchen police").

Lima Charlie: Loud and clear (used to say, "I heard and understood what you said").

M.R.E.: "Meals ready to eat," a pretty unpopular ration of food provided by the military.

To nug it out: To get it done.

P.M.C.S.: An inspection to make sure equipment works before you really need to use it; a dry run (literally "preventative maintenance checks and services").

To pop smoke: To leave.

Top: Boss (from the nickname for a first sergeant).

WARNO: A heads up that a project is coming soon (literally "warning order").

How'd you do? Did you know any of them already? Have you heard others not covered above? If so, drop what you heard in the comments below and we'll translate them. Are you a veteran or current military member? Only a tiny fraction of slang was covered, but you could help me educate our civilian brothers and sisters by adding to the list below.