I love Chicago bicycling. I am too often scared to be on our streets. The worst offender for me is Clark St. through Andersonville. My worst collision was at Berwyn Ave and Clark where a driver didn't look or see me and turned into my path. In the absence of cars, the streetscape is wonderful, featuring lively storefronts, public recycling bins, multiple people spots and bike corrals, but something about this lively activity causes drivers to repeatedly prove dangerous and inattentive. A bicyclist cannot enjoy a neighborhood ride because of the constant, looming threat of drivers turning or parking without indicating, not paying attention, and opening doors. It is unusual to ride through it without one of these incidents occurring. With these constant hazards I now accept that I might not make it back home safe, and I am fed up with feeling this way, then experiencing victim blaming and driver excuses.

The go-to statement for drivers on their errors, "I didn't see you." What every driver that has hit me has said. An excuse too common and, as I see it, unacceptable. A car is a potential murder weapon, and the driver controlling it is accountable to behaving appropriately. As long as cars and bikes are sharing the same street space, riders will never be safe or experience equality because cars will always win in a fight under our current conditions.

The questions I am seeking answers to here: How can a neighborhood build a streetscape to prevent the "I didn't see you," excuse from occurring? What can a Chicago community do to constructively improve its resident's safety, livability, and sustainability of a major neighborhood street?

Andersonville strives for sustainability. The Andersonville Development Corporation and Eco-Andersonville implemented the first neighborhood composting program in the city. They have a program for green certified businesses, and transportation sustainability is a promoted initiatives. In Chicago's last Bicyclist Crash Analysis, Clark is named as a "hotspot" with a large concentration of collisions along with Lincoln and Milwaukee Aves. Street improvements to fix this problem are where I see their next biggest opportunity. Dearborn St., Kinzie St. and Milwaukee protected lanes have started the momentum. Clark St. can continue it along with the new planned barrier-protected lanes on State St. and Clybourn Ave. Andersonville started with four new bike corrals, now people need a safe route to access these features with protected bike facilities and complete street features such as curb extensions.

In my utopia, the solution is to eliminate the personal-vehicle use lanes and build bike facilities in that space. Using the design web-tool Streetmix to visualize the streetscape, this bicycling utopia is shown below.

This design doesn't support the U.S.-centric model and concept of "sharing the road," which has been promoted as THE safety solution in the past. This cannot be the answer when drivers demonstrate consistent, repetitive, dangerous behavior leading to unnecessary pedestrian and cyclist deaths.

Under current policies and laws bicyclists and drivers will not be equal while sharing our streets because roads are not built for people but for vehicles. Our political system has a long history of car corporation supported politicians and planning boards which results in roads built for moving goods and making profits without consideration of creating safe, livable streets for people and communities. The flaws continue in law with unequal punishments for collisions and injury. America's car-centric system with auto industry tax breaks, subsidies and general preferential treatment to large companies has led to what we see now: A system where cars have, for too long, burdened the public sector, while destroying streets and polluting the air and people's lungs. This is a result of distorted profit-driven policies which doesn't realize the economic and social inclusiveness of sustainable communities.

Increased bicycling in neighborhoods has proven to improve the local economic vitality with increased money remaining within the local community than does with drivers and studies support that bicyclists and bike routes have a positive impact on businesses. Academic research has shown that the key to achieving high levels of cycling is "The provision of separate cycling facilities along heavily travelled roads and at intersections. Combined with traffic calming of most residential neighborhoods." With the commitment and advocacy by Andersonville business owners to the local movement and enhancing sustainability in their buildings, these arguments complement the neighborhood's attitude.

Alas, with Clark as a major city corridor eliminating personal-vehicle use lanes could cause a mess in other neighborhoods (although it has been done successfully in other cities). To accommodate this traffic, below is the street resigned to with protected bike facilities and traffic calming techniques as a feasible solution for all modes of transportation.

Chicago's Complete Streets Chicago: Design Guidelines under Chicago Forward, CDOT's two-year action agenda supports this design. Along with this policy, Chicago is continuing to show protected bike lanes are the answer and solution, as CDOT and IDOT have announced a protected lane on Clybourn resulting from Bobby Cann's death. From a survey done by Bike Fancy, Chicago riders feel that building more bike lanes is the 2nd most important measure to increasing bike friendliness, following more courtesy/awareness.

Under complete street and NACTO (National Association of City Transportation Officials) guidelines, curb extensions play a large part in these new enhancements. Promoted by the Active Transportation Alliance in a seminar on advocating for complete streets and in the Complete Streets Design Guides, curb extensions can do wonders for a streets safety by prioritizing the pedestrian and minimizing the driver sight issues I have described here.

The best solution as I see it, bring the solution local. A strategy Andersonville has proven extremely adept in. Create a neighborhood corridor that supports people on the street. Take away the polluting cars waiting at lights and absent minded drivers running stop signs, and make people -- people without steel barriers -- the focus of the street. Building barrier protected, two-way bicycling infrastructure is the most promising and achievable means for a better, safer and equitable Clark St and in all other major neighborhood corridors.

These design enhancements and streetscape improvements can change this:

From NACTO's Urban Street Design Guide - from an example like this: 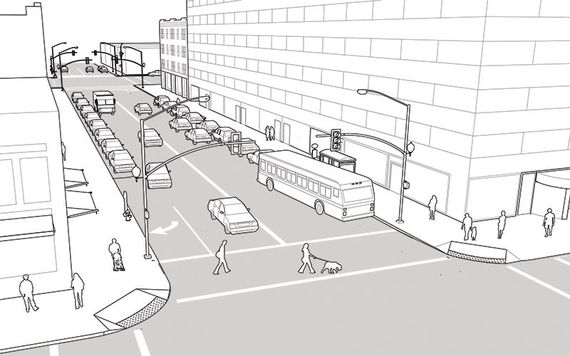 Into a version of this, showcasing intersection improvements: 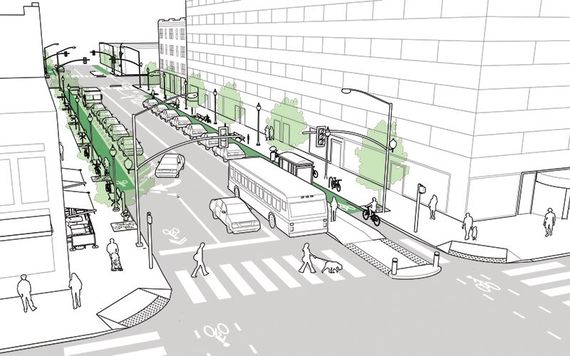