When a UFO video seems too good to be true -- is it?

We've pointed out many times how difficult it is to identify hoaxes among UFO photos and videos, and computer technology has just added to the confusion. With the right app or Photoshop elements, even youngsters can create and post real-looking, out-of-this-world UFOs to YouTube faster than you can say, "ET, phone home." But the footage doesn't always hold up under expert scrutiny.

Consider this recent example: A triangular UFO was reportedly videotaped over Kassel, Germany, on June 26 by a man who was taping his son playing in a park, reports the International Business Times.

"The fact that the person blurred out the face of the kid and didn't get the UFO in the dead center of the video is what causes me to believe this is real," he said. "Also, the lighting and shading on the UFO matches that of the trees and the bars of [the] jungle gym."

But is that analysis enough to give this UFO the seal of approval? Other experts say no.

"There are two giveaway segments" that show the UFO is computer-generated, said Marc Dantonio, chief photo and video analyst for the Mutual UFO Network. "As the object is first seen, you notice that the cameraman shifts the camera up and down a bit. The object should not be affected by this motion at all."

Dantonio, who was featured on last month's Syfy Channel documentary, "Aliens on the Moon: The Truth Exposed," told The Huffington Post in an email that the triangular object in this Germany video should appear to move smoothly through the sky. "Its path, however, indicates anything but. As the camera moves, the object shifts in the sky in direct correlation to the movements of the camera.

"This shows me that this is a CG composition where the UFO flying in the sky was poorly tracked with ground objects. This happens several times," Dantonio wrote.

The cracks in the facade don't end there.

"The video incorporates the image of a classic triangle UFO, which witnesses often report as silently floating across the sky. The videographer got that part right. However, there are several major red flags that tell me this was a hoax," Hansen told HuffPost in an email.

"Although witnesses' reactions can vary greatly when seeing a shocking UFO event, this man appears extremely underwhelmed. I would expect a little more enthusiasm or effort to try and follow the craft when it emerges behind the trees. If he made efforts to follow it, I'd like to see that. We're led to believe that he puts down the camera and casually strolls away."

Hansen agrees with Dantonio that the video is most likely the product of CGI (computer-generated imagery).

"As much time as was spent on getting the movement of the UFO right, the editor was a little lazy on the details of what we call 'rotoscoping,'" Hansen said, describing what is probably the final blow to the video's authenticity. "Going frame by frame -- to tell the software program which objects the UFO needed to pass behind -- it appears they got a little sloppy."

Hansen explains that he magnified and lightened the image, shown below, and it "shows the corner of the UFO accidentally overlapping in front of the playground structure when it was supposed to be passing behind." 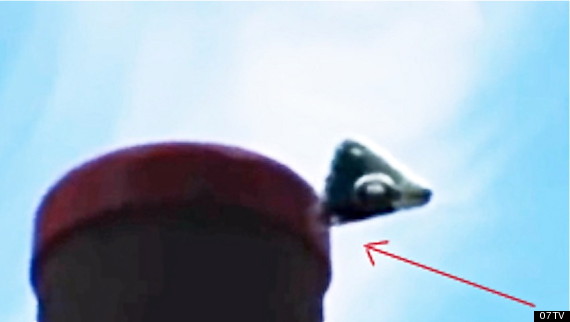 When it comes to UFO videos, you can't always believe what you think you're seeing.