I have been trying to understand what it is leading so many people to apparently accept the ugliness of Donald Trump's words without fighting back. The media give him a total pass and basically decent, caring, loving people succumb to what they seem to think is inevitable.

The more I thought about it and listened to Trump spout his invective the more I realize he is a cancer on our society. He is the malignant tumor that has to be cut out. Yet like with many malignancies they can spread and attack different parts of the body while we look for the way to destroy them. Trump is the evil cancer that we must find a way to destroy before it destroys us.

The cancer that is Trump has shown our society to be like the body that hosts and allows the cancer to spread because of a weakened immune system. Trump cancer is able to spread by going around the decent healthy parts of society and focusing laser-like on the weaker ones. Those weaker being some who are openly racist, sexist and homophobic; but more are the many in society whose resolve to fight has been weakened by the recession and the day-to-day struggles they face.

Before it's too late we need to find the cure for the Trump cancer. We need to help those who are basically decent and caring but who have been worn down by life to find the strength within themselves to fight this cancer and not give into it. To do this we need to show them while the road back to health is hard it begins with vowing not to succumb to the cancer. Reminding them of the Democratic Party's commitment to equality, equal pay for equal work, reduced interest on student loans, higher minimum wage, and more robust economic development among other programs should give them something to believe in and hold on to while they are on the road back to health.

To help society regain the strength to fight the ugliness that is the Trump cancer we need to give them a positive message allowing them to see and accept there is a brighter future ahead for them and their families.

Now it's important we are honest and tell people that like with chemotherapy or other cancer drugs the cure isn't always easy and there will be some pain along the way as together we defeat this Trump cancer. We need them to believe that like a loving family when one member is stricken with cancer the rest of us will stand strong with them and fight it together. We will hold their hands through the pain and develop the policies and programs that will make the struggle and pain easier to bare while they recover. They need to believe that while the fight is hard what awaits them and their families on the other side is worth fighting for.

For the past eight years, President Obama has worked hard to strengthen the immune system of our society. We have avoided what looked like immediate death from the Bush recession and slowly but surely rebuilt the American economy. We have fought off the cancer cells that tried to destroy us then but like with many cancers, they can appear to be cured while merely being in remission. The Trump cancer is ending that remission and running rampant over society wanting to stop our progress to the final cure and instead trying to kill society as we know it.

We know when cancer attacks the body one of the ways besides chemotherapy and drugs to fight it is for the person to have a positive attitude and loving people around them every day. They must be inspired to hope and see a healthy future for themselves. The Trump cancer is trying to take away the light and bring back the darkness of despair keeping society from trying to fight it.

The Trump cancer can and must be destroyed. If we join together and fight it there is still time. We must display the will to stay focused and not be sidelined with protest votes or not voting at all. We must understand the only thing that will finally defeat Trump cancer is electing Hillary Clinton. 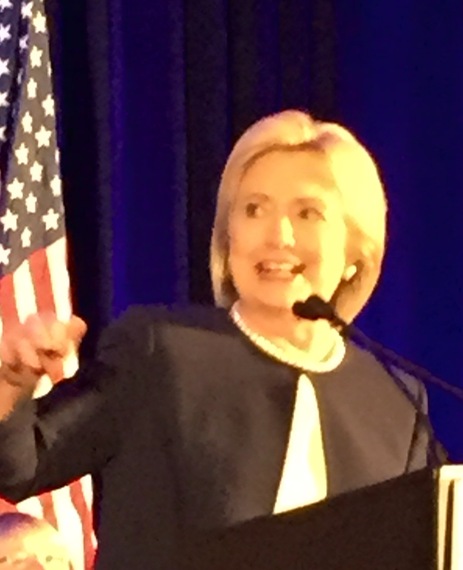