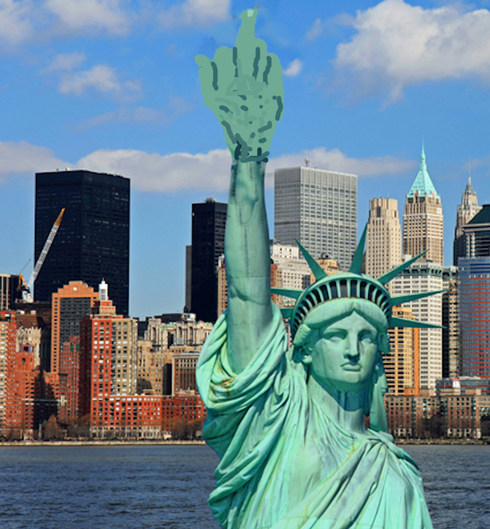 The All-White House. This afternoon, "president" Trump signed an executive order instructing the National Park Service immediately to begin work to replace the torch in the raised right hand of the Statue of Liberty with a hand that has a raised middle finger.

Counselor to the "president" Kellyanne Conway explained that it is a completely logical change. "It will merely make the greeting to foreigners approaching the United States a more accurate depiction of President Trump's attitude towards the rest of the world, refugees, the tired and poor, and huddled masses yearning to breathe free." Following a pause, Conway added, "We sure don't want any wretched refuse in this country!"

White House Press Secretary Sean Spicer said that Mr. Trump's executive order contains more, but the rest wouldn't fit in a tweet and the "president" didn't know of another way to communicate it. Spicer said, "The President has also ordered that the words of the poem on the Statue be changed to:

"Give me your oil tycoons, your rich,
Your women (10s only and under 35) yearning to be groped,
The oligarchs who surround Putin.
Send these, those with multiple mansions, to me,
I lift my middle finger beside the golden door of Trump Tower!"

"People are saying this is the greatest idea in the history of America--no, the world," said Spicer, relaying Trump's words.

Robert S. McElvaine is completing a book on Trump, language, and the history of misogyny.