U2 celebrated Ireland's sweeping same-sex marriage victory over the weekend in a thrilling and profound way.

At the band's May 23 concert in Phoenix, Arizona, U2 frontman Bono toasted his homeland's approval of marriage equality, telling the crowd, “It's a moment for us to thank the people who brought peace to our country, who had the courage to compromise in Ireland.”

“We have peace in Ireland today, and -- in fact, on this very day -- we have true equality in Ireland,” he added. “Millions turned up to vote yesterday to say love is the highest law in the land. ...If God loves us, whoever we love, wherever we come from, then why can't the state?”

The rocker addressed the audience while dedicating a lively performance of his band's 1984 smash, “Pride (In the Name of Love),” to Ireland's marriage equality ruling. The song was originally written about Martin Luther King, Jr. and has been embraced as an empowerment anthem ever since.

Last week, the band also shared its support of same-sex marriage on its official Instagram page.

Bono, who has been married to his wife, Ali Hewson, since 1982, has previously spoken out in support of same-sex marriage.

“As far as I know, Jesus wasn’t a married man and neither are most priests talking about it. It is not a religious idea,” he told the Irish Times earlier this month. “In my mind, commitment is one of the most impossibly great human traits. It is a hard thing to hold on to, and anything that brings that together is a totally wonderful thing.”

He then added, “So here is what I have to say about it: wherever marriage occurs, it should be encouraged.”

Irish officials announced Saturday that 62.1 percent of voters favored changing the nation's constitution to define marriage as a union between two people, regardless of their sex. This makes Ireland the world's first country to approve same-sex marriage by popular vote.

Correction: An earlier version of this article misstated the date of the concert. This has been corrected. 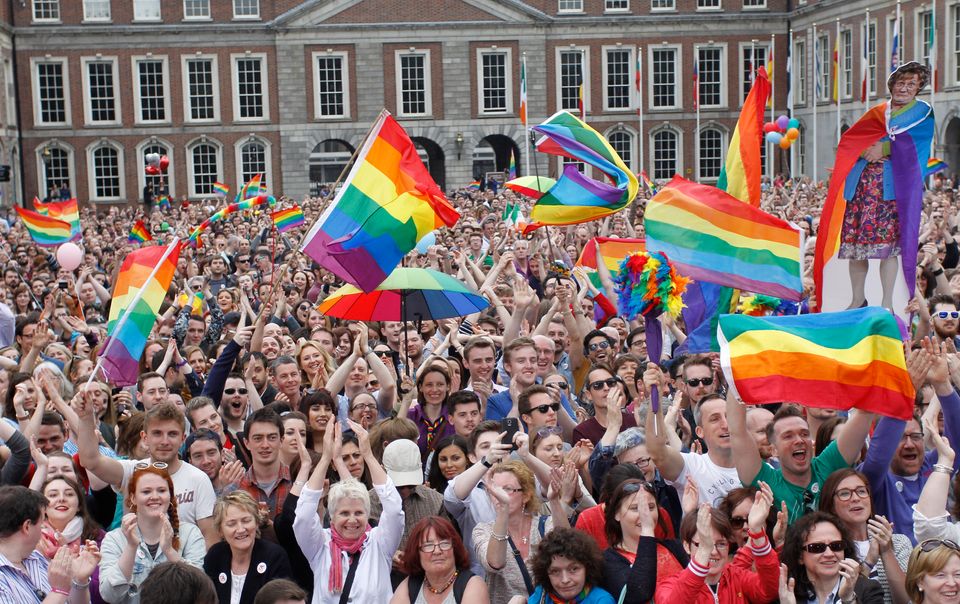 1 / 16
Ireland Gay Marriage
Yes supporters react at Dublin castle, Ireland, Saturday, May 23, 2015. Ireland has voted resoundingly to legalize gay marriage in the world's first national vote on the issue, leaders on both sides of the Irish referendum declared Saturday even as official ballot counting continued. Senior figures from the "no" campaign, who sought to prevent Ireland's constitution from being amended to permit same-sex marriages, say the only question is how large the "yes" side's margin of victory will be from Friday's vote. (AP Photo/Peter Morrison)
ASSOCIATED PRESS