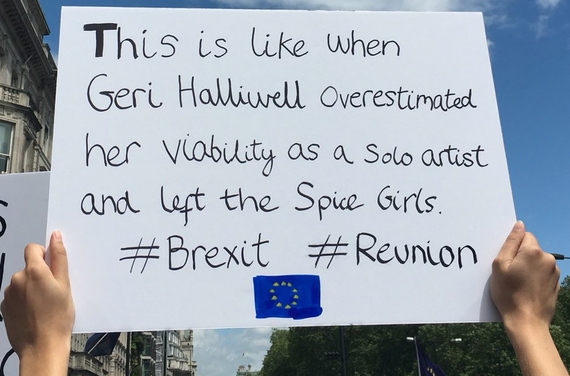 In a shock move by the barely functioning UK government, it was announced today that those who voted Remain in the recent EU referendum are to be issued with official I told you so cards.

A government spokesman confessed, "Frankly it's the least we can do. I mean, they totally did, so some form of recognition seemed in order."

Whist it's expected that thousands of the handy wallet-sized cards will be redeemed almost immediately, some recipients are planning to hold onto theirs. Lily Hansom of York, told us, "I see it as more of a long term investment. I'll wait until those lying f*****g Tories finally kill the NHS or Scotland p*****s off, or when sewage starts floating up on the f*****g beaches again because the EU isn't forcing Westminster to clean it the-f**k up, then I can really get my monies worth.

Likewise Toby Wiggins of Kenton, West London admitted, "I think it's a great idea, if long overdue. I would have liked to have used mine when the economy first tanked, or when every single Leave leader did a Usain Bolt for the nearest hills, but I've decided I'm going to hold onto mine, frankly it seems like the best investment I can make right now.

Meanwhile, in an effort to unite the increasingly fractured kingdom, victorious Leave supporters are set to be issued with their own choice of cards -- from a laminated 'Stop talking the country down' release which can be used to blame the remain side for the epic s**t storm sweeping the nation, to 'We Made Britain Great Again', which can be show to children as a potent example of irony and sarcasm, and even a limited edition, 'OK, I f*****d up' card.

Those wishing to claim their card can register with the UK government from tomorrow morning.