Arugula in Austin. Mint in Miami. Rhubarb in Rio. While some of the press about the rise of urban farming suggests that it's merely the province of artisanal-minded hipsters, the truth is that done correctly and at scale, it can be a smart, sustainable, and ultimately profitable use of valuable city space that can bring farmers and shoppers much closer together.

UP ON A ROOF

A good deal of the credit for the urban agriculture trend goes to startup firm Gotham Greens, which has made a name for itself with three rooftop greenhouse/farms around New York City, including a very high-profile farm atop a Whole Foods Market in Gowanus, Brooklyn. Gotham Greens executives point out that cities don't have arable land, but they do have lots of available roof space, and landlords are happy to find a way to rent it out. With a growing understanding of the impact of modern agriculture on the environment, Gotham Greens sees increasing demand for responsible, sustainable food, and its methods use 20 times less land and 10 times less water than traditional farming to achieve the same output. There are no pesticides--predatory insects are introduced to control pests--and no fertilizer runoff. 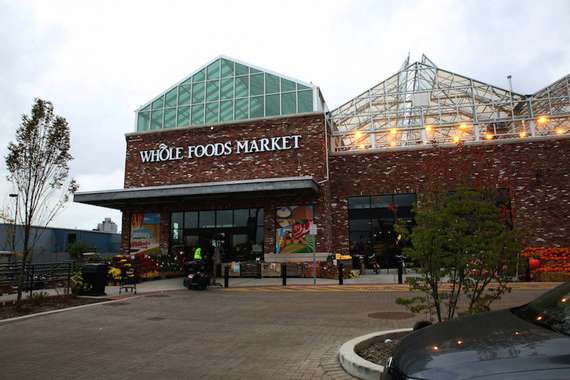 In Gowanus, the company grows herbs and produce -- it specialized in basil -- and some of it is sold downstairs at Whole Foods, with a distribution distance of one single staircase. In fact, everything the farm produces is distributed within seven miles, which cuts way down on the typical 50 percent waste of America's produce supply chain, not to mention the fact that with its state-of-the-art greenhouse technology, Gotham Greens can harvest year-round.

The model is so successful that the company has expanded to Chicago, where, starting this fall, it will run a huge $30 million, 75,000-square-foot hydroponic greenhouse atop a new factory opened by Method, the environmentally friendly cleaning supplies manufacturer. The goal: 500 tons of produce per year. The roof will be very heavy, but it will also help to insulate the building below. The project is designed by William McDonough + Partners, the same firm that designed Ford's massive living roof atop its Rouge River plant in Michigan.

Down in Sao Paulo, Brazil, the Eldorado shopping mall is equipped with a rooftop farm that uses compost created from the food court scraps collected downstairs. Every day, 800 pounds of food waste is composted, and mall employees plant lettuce, eggplants, peppers, basil, mint, and tomatoes, which they then get to take home. The amounts of trash, landfill, and carbon dioxide are all reduced. In fact, the farmers say, the plants seem to thrive on the elevated levels of CO2 in the urban environment.

To confirm that climate doesn't matter when it comes to rooftop greenhouse farming, head to chilly Montreal, Canada to visit Lufa Farms, which has been operating a 31,000-square-foot hydroponic rooftop farm for four years. It grows 25 kinds of produce for local restaurants and shoppers, who can order customized food baskets for pickup, vastly simplifying and shortening the supply chain. The farm captures rainwater, recirculates it, and avoids releasing the nutrient-rich water into the city system, where it might grow algae. Despite the harsh winters, the farm requires little heat, in part because it captures warmth from the building below. 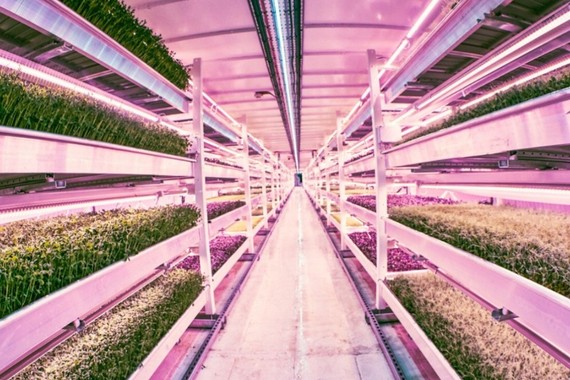 Can urban farming succeed even where no sunlight is available? Pretty soon, arugula, pea shoots, mustard, coriander, celery, and radishes will emerge from a tunnel 100 feet below Clapham, London, where a company appropriately called Growing Underground has taken over a former World War II bomb shelter and turned it into a 2.5-acre hydroponic farm illuminated by plant-friendly LED lights. Take a look at this video.

Using 70 percent less water than outdoor farming, the farm is extremely efficient as well as pesticide-free since, as you might imagine, there are no pests down there. The farmers plan to distribute their produce only to restaurants at first, and only within a 30-mile radius to minimize their carbon footprint and to go, as they say, "from farm to fork in under four hours."

FARMS IN A BOX

And if no rooftop -- or tunnel -- is available for an urban farming project, perhaps a parking spot or two will suffice. Several companies are now manufacturing mini-farms that are entirely contained within standard 320-square-foot shipping containers. Freight Farms, which began with a Kickstarter campaign in 2011, markets the Leafy Green Machine (LGM), which uses plant-optimal LED lighting, vertical hydroponic growing towers that use 90% less water than soil-based planting, and automated climate-control and irrigation to grow up to 4,500 small plants at a time and up to an acre's worth of food per year. And you don't really need to do much work. There's an app for that. The entire unit -- or several units that can be stacked to make the most of your space -- can be controlled from a smartphone. 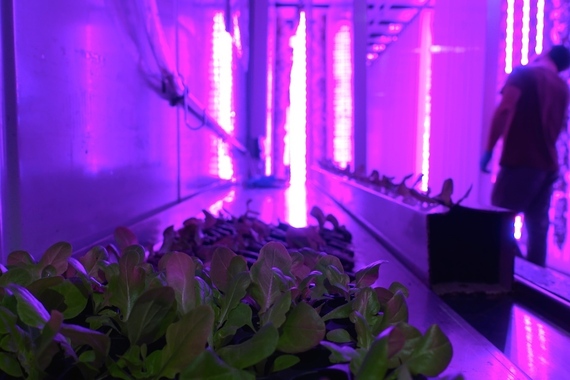 Cropbox offers a similar container and smartphone sensors, although its design offers just 2,800 planting spots, and the current model uses less efficient conventional lighting to grow your choice of greens, strawberries, or fodder. The company is offering the possibility of lease-to-own options and notes that the return on investment for the year-round operation could be as fast as seven months for a crop such as basil.

If nothing else, urban farming seems destined to cause a pesto boom.