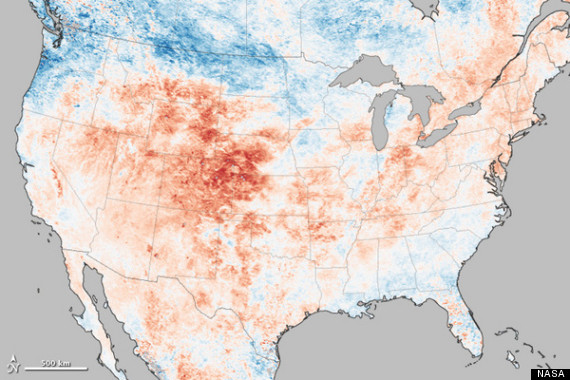 This map shows the heat wave currently sweeping across the United States with temperatures taken by a NASA satellite on June 26, 2012.

Heat is beating records around the country: the first five months of 2012 have been the hottest on record in the contiguous United States. And that's not including June, when 164 all-time high temperature records were tied or broken around the country, according to government records.

That's unusual, since the most intense heat usually comes in July and August for much of the country, said Jake Crouch, a climate scientist with National Climatic Data Center. For example, only 47 all-time high records were tied or broken in June of last year.

Also, more than 40,000 daily heat records have been broken around the country so far this year, according to the National Oceanic and Atmospheric Administration. Compare that with last year —the ninth warmest on record — when only 25,000 daily records had been set by this date.

In other words, the heat really is that bad. And behind the records is a set of weather and climate conditions that is keeping the heat locked in over the country, with little respite in sight.

The warm summer follows an unusually warm winter, which was the hottest and driest that the western United States has ever seen since records have been kept, said Jeff Weber, a scientist with the University Corporation for Atmospheric Research in Boulder, Colo

The heat burning up the country right now is due in part to a persistent high pressure system, also called a heat ridge or dome, which parked itself over the mountain west, and has now shifted east into the Midwest and Southeast. The system is unfortunately stuck in place, Weber said, because of a slowdown of the North Atlantic Oscillation, a climate pattern that pulls weather patterns eastward across the country.

This "blocking" of the Atlantic has caused the jet stream, which normally ferries air from west to east across the United States, to buckle and trap heat in the Midwest and Southeast, Weber told OurAmazingPlanet.

That's not unusual in the summer, said National Weather Service meteorologist Greg Carbin. But this pattern of hot air does cover a broader area than usual, and the total amount of hot air is greater, stretching higher up in the atmosphere than normal, he said.

Dry soils, in part a product of the dry winter, exacerbate the heat. "If the soils were wetter, more energy would be absorbed by the water and the daily high temperatures wouldn't be as warm," Crouch told OurAmazingPlanet. For example, southern Georgia and Florida, drenched by Tropical Storm Debby, haven't been as hot as areas to the north in the last week or so.

Unfortunately, the heat doesn't look likely to dissipate soon, with the National Weather Service expecting warmer-than-usual temperatures to continue for the remainder of the summer across much of the country. The southwest and Rocky Mountains could be in for a reprieve soon, however, thanks to the beginning of the North American typhoon, which is predicted to start bringing moisture and cooler temperatures into the area later this week, Weber said.

The early heat waves of summer — following higher temperatures in spring and winter — could also be part of a pattern of climate change.

"It's consistent with what we'd expect in a warming climate, but it's hard to quantify any effect climate change might have on an individual event like this heat wave," Crouch said.

While only one heat wave cannot by itself be linked to climate change, a significant increase in these types of events over time could be a hallmark of a warming planet. "An increasing frequency of heat waves —that's one aspect of climate change you can point to," Carbin said.

Over the past few years, daily record high temperatures have been outpacing daily record lows by 2-to-1 on average, according to the website Climate Central. A 2009 study found that if the climate were not warming, that ratio would be expected to be even. So far this year, there have been 40,113 high temperature records set or tied, compared with just 5,835 cold records, a ratio of about 7-to-1.

"This could be a harbinger of things to come," Weber said.
Editor's note: This story has been updated to note that the first five months of 2012, not 2011, have been the hottest on record.