The U.S. and China are not actually competing in most of the African markets and sectors in which they are operational. They could in fact adopt much more official collaborative approaches and drop the political competitive rhetoric, which, regardless, economic agents are not following in practical terms.

The political rhetoric used by the U.S. and China to distinguish their respective economic policies toward Africa is misaligned with the actual strategy, investments and operations governmental agencies and companies from those same countries develop on the ground. The behavior of "real economic agents" in Africa, such as companies, follows much more closely notions and principles of complementarity, synchronization, comparative advantages, market niches and market segmentation, than principles of competition, market shares and rivalry. While official discourse about the presence of these two countries in Africa has been inflamed with political intrigue and a competitive attitude, economic agents' actual behavior shows a much broader propensity for collaboration. Will the competitive paradigm in geo-strategic politics hold Africa back once again?

"We don't look to Africa simply for its natural resources. We recognize Africa for its greatest resource which is its people and its talents and its potential," President Obama stated during the US-Africa Leaders Summit held in the White House in August. The President continued: "We don't simply want to extract minerals from the ground for our growth. We want to build partnerships that create jobs and opportunity for all our peoples, that unleash the next era of African growth." Though not explicit, this was an obvious jab at China. Similarly, from the other side of the world, earlier this year, the official news agency Xinhua quoted China's Premier Li Keqiang as saying in an equally obvious jab at the west: "I wish to assure our African friends in all seriousness that China will never pursue a colonialist path like some countries did, or allow colonialism, which belongs to the past, to reappear in Africa."

It is surprising how inconceivable it is for so many policymakers and market analysts that the logic of international relations might not be a zero-sum game. With sufficient information-processing capabilities about others' past behavior and proper institutional features in place, such as the possibility for gains and for repeated interactions with one another, the pay-offs from cooperation and reciprocal altruism are greater. The nature of such institutional features help explains why competition is the predominant "behavior" between basic forms of biological and social organization where modern communication and information technologies are not available.

Looking at the presence of U.S. and China in Africa from a competitive lens makes very little sense and, worse, it is not constructive - not for African development and not for the economic expansion aspirations of the U.S. and China. A brief comparative analysis between the U.S. and China, in terms of development assistance to, and direct investment in, imports from and exports to Africa, helps illustrate how much indeed companies and government agencies are willing to collaborate. However, top politicians with easy access to various forms of communication for dissemination of their ideologies want to makes us all believe otherwise.

Development Assistance Africa is obviously not one single entity; it is more than 50 different countries and both the U.S. and China have been focusing their work in different geographic locations. The African nations benefiting most from U.S. official development assistance (ODA) in 2011-2012 were Kenya, Ethiopia, Tanzania and South Africa. For the same period, according to AidData, Senegal, Burundi, Sierra Leone, Congo, Zambia, Namibia were the biggest recipients of Chinese aid. According to the same source, during 2000-2011 the top three recipients of Chinese aid were Ghana, Nigeria and the Sudan (including South Sudan). 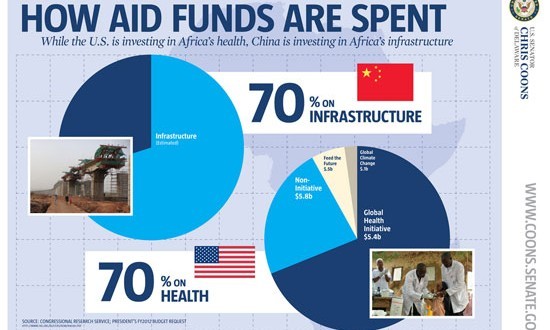 Finding #1: U.S. and China's top recipients of development assistance do not coincide.

Finding #2: Transportation and storage equipment is the only sector where U.S. and China's top interests coincide in terms of development assistance. 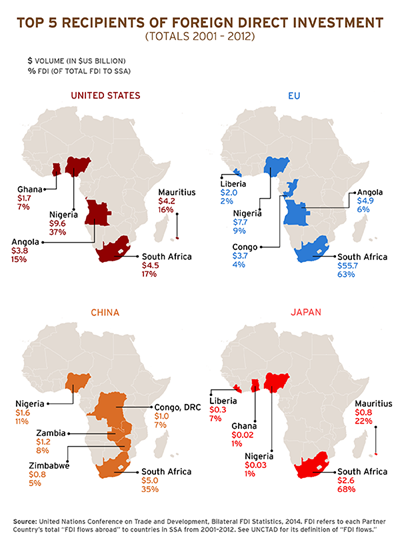 Finding #3: Only two of the top five recipients of direct investment by the U.S. and China coincide (South Africa and Nigeria). The degree of coincidence is higher between the U.S. and the European Union (EU).

Finding #4: Only two of the top four sectors benefiting from U.S. and Chinese investment coincide (Banking/Finance and Construction/Infrastructure).

Market Share On a continental scale, China dwarfs the size of the U.S. market share in Africa. According to Mthuli Ncube, Chief Economist at the African Development Bank Group, Chinese firms accounted for 40% of the corporate contracts signed in Africa in 2010 against the 2% for U.S. firms. In 2009 China had already surpassed the U.S. as Africa's largest trading partner.

Finding #5: Respective market shares are so disproportionate that the notion of existing of competing forces on the ground is simply unfounded.

Finding #7: Only two of the top five U.S. and China's interest in terms of export sectors coincide (Machinery and Vehicles/Transportation).

The five largest import categories in 2013 for the U.S. were mineral fuel (crude), precious stones (platinum and diamonds), vehicles, cocoa, and ores, slag, ash (titanium, chromium, and uranium). However, according to the U.S. Energy Information Administration (EIA), the U.S. crude imports from Africa are down 90% since 2010. China's main imports from Africa are petroleum, agricultural products, minerals, metals, stone and glass and wood.

Finding #9: Metals and Stones seems to be the only clear sector of coincidence between top U.S. and China's interest in terms of import sectors. 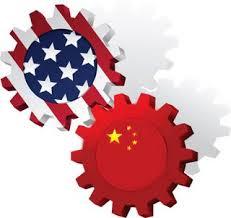 Nine main findings! So now what? What a paradox it is that to fight international common evils, such as terrorism, top politicians seek for alliances and to, presumably, develop the common good they compete!

The patterns summarized in these nine findings seem much more aligned with ideas of complementarity, synchronization, comparative advantages, market niches and market segmentation than with open competition and market shares and rivalry between companies and development agencies. Moreover, if the political discourse was not so based on intrigue and unreal competitive notions, governments could adopt those markets and sectors where interests coincide to design and test new collaborative approaches for development in Africa.

President Obama and Premier Li Keqiang: you don't need to be so competitive because you're not actually competing. A more formal collaborative approach could be in your mutual interest.

The competitive paradigm may, once again, hold Africa back. Robert Wright's Nonzero story of history shows how "growth of non-zero-sumness" has been the paramount dynamic feature of humankind's journey from bands to tribes, to chiefdoms to kingdoms, to states, and to structures of regional and world governance.