Around the start of 2013, meteorologists at AccuWeather.com noticed that a change in temperature high the atmosphere over the North Pole was occurring and projected an arctic outbreak in North America during the middle of January.

The phenomenon is known as sudden stratospheric warming.

The explanation is a little complex, but we will try to bring it to layman's terms. Just keep in mind there are also other players on the field, which we do not mention.

If you view the stratosphere as a mirror image or an opposite of the part of the atmosphere where we live and breathe (the troposphere), it may be easier to understand.

On Dec. 28, 2012, Expert Senior Meteorologist Brett Anderson, who monitors the stratosphere for changes, noticed that one of his forecasting tools was projecting sudden warming of the stratosphere during the first week of January. 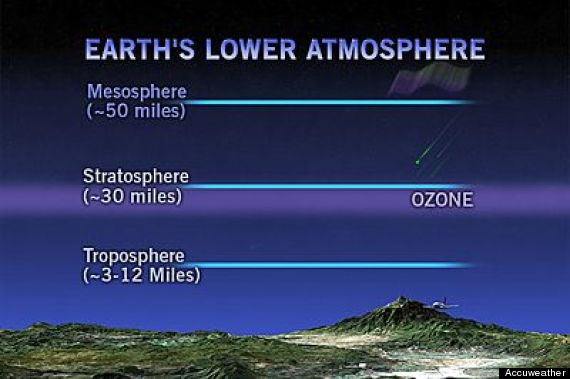 During the first few days of January 2013, the stratospheric warming event was confirmed by Meteorologist Mark Paquette.

"While all of the causes of the event are still not known, the chain reaction that occurs following the sudden warming in the stratosphere typically leads to one or more arctic outbreaks at the mid-latitudes around the Northern Hemisphere roughly two to three weeks later," Paquette said.

One theory as to the cause of the warming is the destruction of ozone during the late fall and early winter.
"Ozone needs sunlight to form and a lack of sunlight leads to its demise. When the ozone is depleted, it may contribute to stratospheric warming," according to Paquette.

The problem with the theory is that it explains the gradual warming of the stratosphere from fall into winter, but not the sudden warmups that can occur a couple of times during the cold weather season.

"Something holds back the warming and then it breaks, like a rubber band snapping." Paquette added.

Another theory is that large storms in the lower part of the atmosphere (the troposphere) cause perturbations in the stratosphere and may allow the upper atmosphere to warm suddenly.

When the stratosphere suddenly warms, it forces a large area of low pressure at the surface, known as the polar vortex, to weaken. 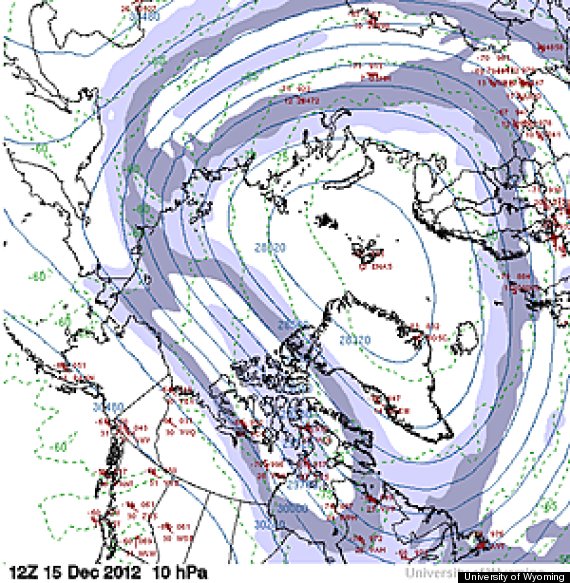 This image of the upper atmosphere shows the polar vortex situated near the North Pole on Dec. 15, 2012. (Image appears courtesy of the University of Wyoming.)

According to Chief Meteorologist Elliot Abrams, "With the vortex no longer strong enough to contain the frigid surface air near the pole, the dam breaks and allows the cold air to start moving southward."

This occurred during the middle of January. It allowed some cold air to seep southward over the Canada Prairies, into the western U.S. for several days and intermittently into the northern Plains and northern New England. However, it was not the main thrust of arctic air.

Sometimes the vortex itself breaks into multiple parts and moves southward. 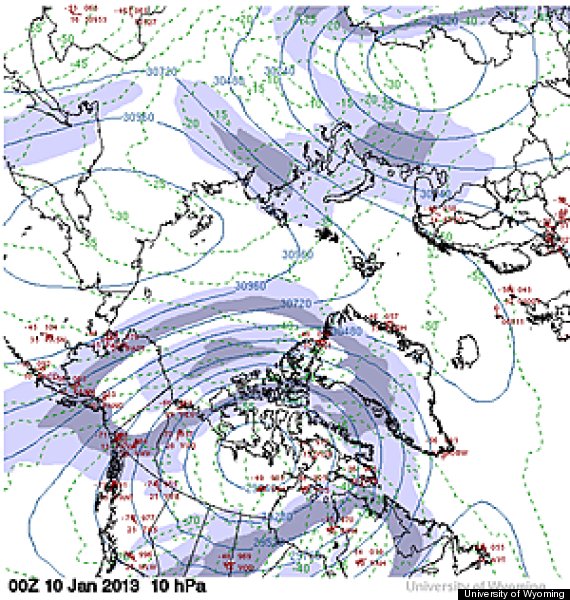 This image of the upper atmosphere shows the polar vortex split in two on Jan. 10, 2013. One center was over the Northwest Territories the other was over eastern Russia. (Image appears courtesy of the University of Wyoming.)

This was the case during week three to week four of January. The polar vortex, essentially the meteorological North Pole, shifted its position to northern Quebec, Canada.

In Europe and Asia, the other piece of the vortex was displaced southward setting up a wedge of cold air, displacing steering-levels winds and setting up cold storms from the United Kingdom to part of the Middle East.

With the North America polar vortex positioned over northern Quebec, the cold air engine was running at three-quarters throttle. 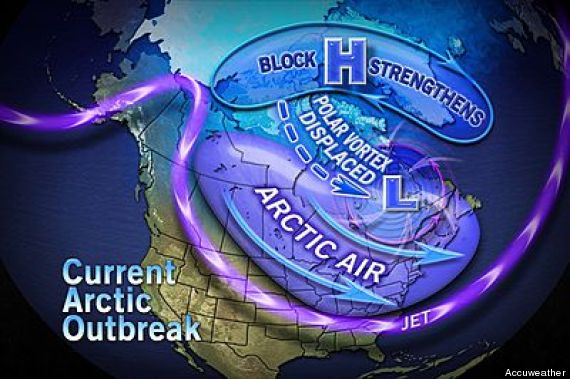 A counterclockwise flow around the giant system directed frigid air near the ground southward across the Canada Prairies and into the northern Plains and Northeastern U.S. creating the outbreak.

Only a larger vortex farther south would result in a full throttle widespread wave of frigid air from the northern Plains and New England southward to Texas and Florida.

According to Expert Senior Meteorologist Dave Dombek, "This occurred during the super Arctic outbreaks in December of 1983 and 1989, as well as in January 1985 and 1994."

According to Paul Pastelok, head of AccuWeather.com's Long Range Forecasting Department, "Indications are the vortex will fluctuate in intensity and position but will remain in the overall general area into February."

This means more waves of frigid air, or arctic outbreaks, can be expected into roughly the same locations of North America.

"It is possible, however, that as the vortex wobbles around, than one or more episodes of rugged cold will visit parts of the West over the next couple of weeks and the cold may take another break in the East," Pastelok said.

The shifting waves of cold and warmth could play havoc on aging water line systems from the Midwest to the Northeast.

"Over the years I have have noticed a surge in water line breaks after a recent arctic outbreak is followed by a warmup," Abrams stated.

The cold waves will likely lead to higher energy consumption, and potentially higher heating bills, when compared to last winter has a whole for people from the northern Plains to the Northeast.