"Nothing is more precious than independence and freedom." -- Ho Chi Minh

"Find the cost of freedom, buried in the ground, Mother Earth will swallow you, lay your body down..." Listening to this '70s antiwar anthem on a recent afternoon, 38 years after the American War in Vietnam drew to a quick and blessed close, I am staggered by the emotional realization of something I have known on an intellectual level for many years.

In few countries do these words ring truer, purer and more poignantly than in Vietnam, where over 3 million men, women and children died a martyr's death in a war of national liberation. In America, the cost of freedom can be found on the battlefields of Concord, Gettysburg, and Normandy. It also echoes throughout the mountains, valleys, and deltas of Vietnam.

A generation of young Americans went to Vietnam, willingly, unwittingly or by force of law, as pawns of a policy elite, itself a prisoner of a Cold War containment and exceptionalist mentality, ignorant of Vietnamese history and culture and, like those before them and those to follow, utterly incapable of seeing the world through other peoples' eyes.

When all was said and done, the U.S. government walked, or rather, scurried away, leaving behind a shameful legacy of death, destruction and human suffering on a Draconian scale that haunts Vietnam to this day. The ghosts of the American War in Vietnam continue to haunt the U.S., as evidenced by the number of veteran suicides, considerably more than the number killed in action, the broken lives of so many survivors and the country's costly inability to come to terms with its past as prologue.

As many thoughtful veterans have observed in the decades since the last U.S. Marine helicopter lifted off of that CIA safe house in Saigon, they ultimately fought mostly for their own survival and the love of one another, not for freedom, democracy, motherhood and apple pie, and certainly not for Nixon, Kissinger, Johnson or Westmoreland. They endured in the fervent hope that they would not return home in a flag-draped casket.

Every family here has a story to tell. There are relatives who haven't walked among the living since 1968, 1970 or 1973, children whose smiling faces remain frozen in time, forever young in a family's memory, pictures on an altar, names inscribed on a temple wall, death anniversaries commemorated yet with no grave for a loved one. (The next time you see the black POW/MIA flag flying high above your local post office, consider this: Vietnam has 300,000 MIAs while the U.S. has about 1,300.) There are those who never knew their father, an uncle or a grandfather.

There are living reminders of the war embodied in the remaining Amerasians, the so-called "dust of life," many of whom have led tragic lives here and in the U.S., veterans and civilian survivors who suffer from post-traumatic stress disorder (PTSD) and the millions of victims -- young and old -- of Agent Orange and Unexploded Ordnance (UXO). (Of the 15 million tons of munitions that the U.S. military dropped on Vietnam, a country about the size of New Mexico, it is estimated that 10 percent failed to detonate on impact.)

What America owes Vietnam it can never repay, though there are many Americans in the U.S. and Vietnam today, including veterans, who are striving mightily and in myriad ways to contribute to the physical and spiritual healing process. They are people like my friend Chuck Searcy, who is an international advisor for Project RENEW, a project founded by the Vietnam Veterans Memorial Fund and the Quang Tri Province's Department of Foreign Affairs that seeks "to prevent accidents and injuries from explosive remnants of war (ERW), making Vietnam safe for future generations."

To those of you who feel pangs of guilt for what you witnessed or were a part of, including the atrocities laid bare in mind-numbing and heart-breaking detail in Nick Turse's best-selling new book Kill Anything That Moves - The Real American War in Vietnam, for what you did or failed to do, or if you are simply looking for closure, take some time to visit Vietnam. 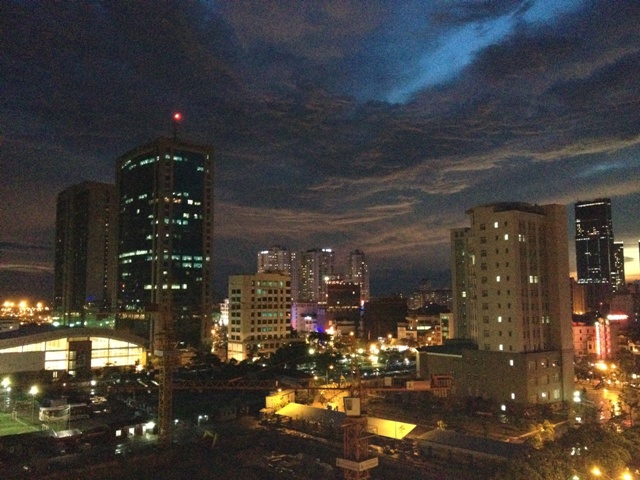 A twilight view of the fastest-growing district in Hanoi. The building on the far right is the Keangnam Hanoi Landmark Tower known as Landmark 72, the tallest building in Vietnam with one 72-story office building and two 48-story residence towers.

To those who stubbornly cling to the belief that the United States had a right to be here in the first place and who embrace the fairy tale that the U.S. government, military, media, and/or anti-war movement "lost" the war -- I extend the same heartfelt invitation.

See and experience for yourself what Vietnam, the Country, looks, feels, smells, tastes and sounds like: (still) beautiful, dynamic, exciting, hospitable, safe, and at peace. No gunshots, artillery fire, whir of helicopter blades, or gut-wrenching fear, just the sounds of construction, the din of traffic and a hard working people trying to make ends meet, improve their lot in life, and enjoy the fruits of a rapidly expanding market economy.

As an American who calls Vietnam his home and is privileged to live and work here in a time of peace and progress, I think of the past from time to time (much more than the Vietnamese do) -- the suffering, the sacrifice, the death raining down from the azure tropical skies, the love, the perseverance, the hope, the triumph. I marvel at just how far this country with a history that spans thousands of years has come in such a blip in time. 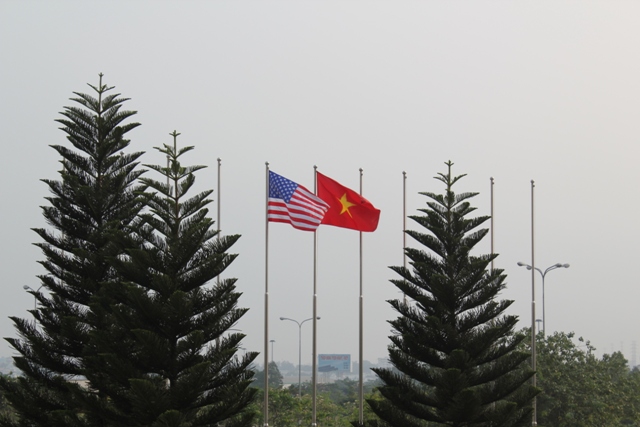 The U.S. and Vietnamese flags flying side by side on the occasion of a visit from an American delegation to Vietnam National University-Ho Chi Minh City.

The "Nam," as some of you still think of it, this country of your dreams and your nightmares, this place in time and mind that will forever be a part of you psychologically, spiritually and, in some cases, physically, survived everything our country threw at it. The story of Việt Nam is one of the great and glorious sagas of history, a nation that exemplifies in nearly ideal terms the resilience, courage, and strength of the human spirit.

So come (back), be ennobled, uplifted and, quite possibly, transformed. The moment you step off the plane you will begin to experience the "new history" that is Vietnam today; your old memories will be overlaid with new ones. Vietnam and its people may even cast their spell on you and inspire you to join your fellow veterans in the U.S. and in-country who are working alongside Vietnamese colleagues to help mitigate the impact of war legacies.

Either way you may find a measure of peace that has eluded you and which veterans who have gone before you often speak of. Your journey may well form the triad of a traumatic past, an optimistic present and a hopeful future. Vietnam is a forgiving and forward-looking place, where you will be welcomed, treated with respect and, in many cases, extended the hand of friendship. That alone is worth the emotional and literal cost of the trip.

Photos by Mark A. Ashwill.