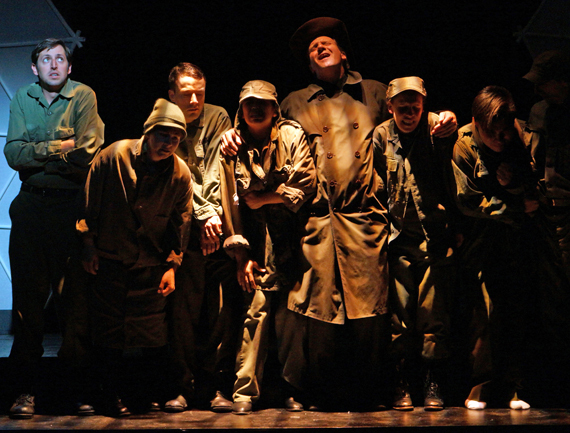 Time flies, as we know too well, especially as the years pile up. So it goes.

In Slaughterhouse-Five, Kurt Vonnegut's regrettably ageless novel, time flies forward and backward, through childhood and advanced age, frivolity and horror, war and peace, life and death, on earth and across uncharted galaxies. Encountered between covers, Vonnegut's literary time allows a reader to pause, to linger and perhaps to reflect. Narratives on the printed page permit and often encourage such interludes.

But Eric Simonson's stage adaptation of the 1969 masterpiece allows no such digression. It runs a bit over 90 minutes at Custom Made Theatre in San Francisco, and once the lights go down there's no time for looking back, lest you miss what comes next. So it goes, swiftly.

One moment's event might take place in Billy Pilgrim's childhood, perhaps in a swim lesson that is at once funny and grotesque; seconds later, Custom Made's versatile actors might transport us with Billy to the Battle of the Bulge, to an optometrists' convention, to a mental hospital, to a prison camp in Germany during the closing days of World War II. Or to a planet called Tralfamadore, whose inhabitants stand tall in the shape of a plumber's plunger with a single eye atop its shaft.

The moments don't fit together neatly, but director Brian Katz and his 11 actors make clear where we are at any instant in the satiric drama, and how the play's multitude of characters relate. Picking individuals out of the crowd may often be difficult, but when it's important for one to stand out, that happens.

Collectively, the cast paints a compelling picture that reflects Vonnegut's creation: a fusion of war story, bizarre science-fiction adventure and a quirky portrait of Americana, especially in the 1940s and '50s.

The war component grew out of his experience as a prisoner, especially during the unexpected bombing of Dresden, where the resulting firestorm killed at least 20,000 people and possibly far more. 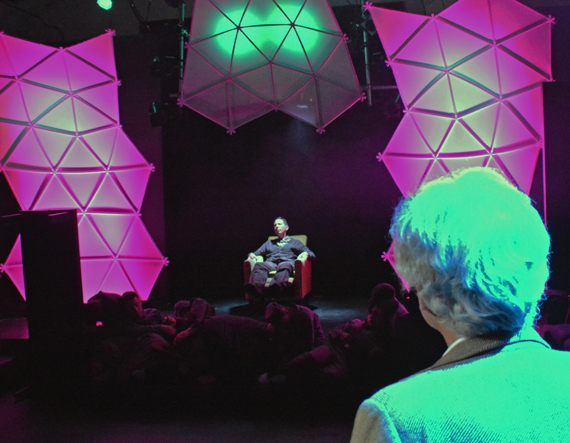 Out of this world: Ryan Hayes plays the traveler through time and space.

With the exception four performers who play Billy at different points in his life and Dave Sikula, a Mark-Twain lookalike who serves as the tale's narrator, everyone handles more roles than the program has room to list.

Brian Martin projects helpless innocence as soldier Billy, surviving only through the efforts of buddies who prod, drag and protect him, at times against his will. Ryan Hayes is Billy in later years, a mercurial eccentric who can be a cheerful optometrist in one scene, a passionate advocate for extraterrestrial life at another, and in still others a bewildered but curious specimen in the hands of aliens. If that's not enough, there are more elements that I won't bother to summarize. Hayes covers the spectrum expertly.

The role of Billy as a child is split between Alun Anderman and Myles Cence, elementary school pupils who alternate. On the night I attended, one of them dispatched the tiny part commendably. I don't know which.

Picking standouts among the ensemble members is difficult, since everyone goes through so many shifts of character, aided by changes of costume, speech patterns and postures. But it would be negligent to ignore Sam Tillis's performance as Lazzaro, a thuggish GI who threatens murderous revenge, after the war, on anyone who crosses him. He may be a loud-mouthed sociopath, but he's scary.

Sarah Phykitt designed the minimal set, with only a few chairs and two distressed black tables on the playing surface, where they are moved or overturned to suggest varying environments. She also ringed Custom Made's small theater with translucent panels that serve as projection screens, sometimes illuminated in bright colors and sometimes allowed to go black, to permit display of Vonnegut's own drawings, in white.

The show is the first of six in Custom Made's 18th season. It will be followed by Edward Albee's Three Tall Women, Sarah Ruhl's Late, A Cowboy Tale, Catherine Trieschmann's How the World Began, Plautus's The Braggart Soldier, and Grey Gardens: The Musical, by Doug Wright, Scott Frankel and Michael Korie.

An afterthought that I think Vonnegut would have appreciated: Drop the first letter of the title and see what you get. Irony? So it goes.

Slaughterhouse-Five (or The Children's Crusade) runs through Oct. 12 at the Gough Street Playhouse, 1620 Gough St., San Francisco. Tickets are $20-$50, from custommade.org