The continued deterioration of conditions on the ground in Libya, Bahrain, and Yemen has led to increased discussion of war crimes and the potential consequences. It is important to remember that not every act of oppression or violence is automatically a war crime, even when it occurs under circumstances that for all intents and purposes look like combat to those caught in its midst.

That is not to diminish the seriousness of human rights violations or the effects of domestic or international criminal conduct, but only an offense that is in violation of international humanitarian law -- commonly called the laws of war -- is a war crime.

In the aftermath of World War II, nations agreed to a set of standards that constitute the laws of war and spelled them out in the Geneva Conventions and their additional protocols. The laws governing international armed conflicts - armed hostilities between two or more State parties -- are more extensive than the rules that apply to non-international armed conflicts within a state, like a civil war or a coup.

The current situations in Libya, Bahrain, and Yemen are non-international armed conflicts (NIACs) many would label civil wars, pitting the State against its people rather than against another State party.

International humanitarian law imposes few limitations on NIACs. Generally, the very basic principles contained in Common Article 3 of the Geneva Conventions (copied below) are the governing standards, unless the conduct rises to the level of crimes against humanity or genocide.

The status of an armed conflict and the rules that govern it can change. For instance, if the United Nations resolution authorizing military intervention to protect civilians and implementation of a no-fly zone in Libya is executed a NIAC terminates and an international armed conflict begins. In that case, the status of the conflict changes at the moment the forces of an additional State party engage with Libyan forces and all parties will be bound by the more extensive rules set out in the Geneva Conventions. 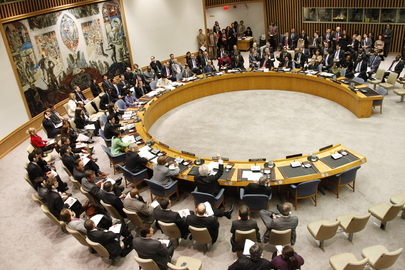 The International Criminal Court (ICC) at the Hague lists 18 specific war crimes that can occur in a NIAC, including attacking civilians, attacking people or things involved in humanitarian assistance, attacking protected objects (like medical facilities), rape, sexual violence, the displacement of civilians, mutilation, and denying quarter (refusing to accept surrender), among others. The ICC is a court of last resort; that is, the Court will not assert jurisdiction over individuals subject to the legitimate jurisdiction of a domestic court for the same or similar conduct. For better or worse, history has shown that the predominate factor in whether individuals are held accountable for war crimes is the outcome of the conflict: Winners rarely face justice, losers often do.

Speaking in September of last year, President of the International Committee of the Red Cross Jakob Kellenberger said "international humanitarian law, in its current state, especially in non-international armed conflict, does not always offer satisfactory legal responses to the needs observed on the ground."

The situations in Libya, Bahrain, and Yemen underscore the point.

Article 3 Common to the Four Geneva Conventions of 1949

Article 3, the text of which is repeated in all four Geneva Conventions, is the only part of the conventions that applies explicitly to internal armed conflicts. It has been called a "treaty in miniature," and sets forth the minimum protections and standards of conduct to which the State and its armed opponents must adhere. The protections it spells out are at the core of international humanitarian law. Additional Protocol II of 1977 also covers internal armed conflicts, but it is less widely accepted among States than the 1949 Conventions.

In the case of armed conflict not of an international character occurring in the territory of one of the High Contracting Parties, each Party to the conflict shall be bound to apply, as a minimum, the following provisions:

1. Persons taking no active part in the hostilities, including members of the armed forces who have laid down their arms and those placed hors de combat by sickness, wounds, detention, or any other cause, shall in all cases be treated humanely, without any adverse distinction founded on race, color, religion or faith, sex, birth of wealth, or any other similar criteria.

To this end the following acts are and shall remain prohibited at any time and in any place whatsoever with respect to the above-mentioned persons:

(a) violence to life and person, in particular murder of all kinds, mutilation, cruel treatment and torture; (b) taking of hostages; (c) outrages upon personal dignity, in particular humiliating and degrading treatment; (d) the passing of sentences and the carrying out of executions without previous judgment pronounced by a regularly constituted court, affording all the judicial guarantees which are recognized as indispensable by civilized peoples.

2. The wounded and sick shall be collected and cared for.

An impartial humanitarian body, such as the International Committee of the Red Cross, may offer its services to the Parties to the conflict.

The Parties to the conflict should further endeavor to bring into force, by means of special agreements, all or part of the other provisions of the present Convention.

The application of the preceding provisions shall not affect the legal status of the Parties to the conflict.