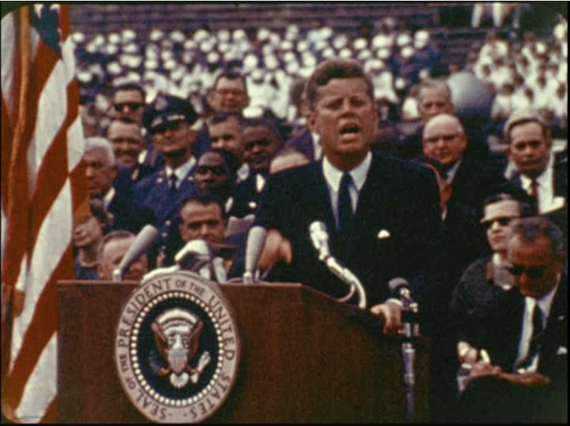 Sometimes you have to change course to get on course. And the first small step in doing so may be to realize you didn't really know where you were going in the first place - and why.

When President Kennedy set us on a path to the Moon in the 1960s, he knew exactly why - to produce a photo-op that would clearly show America would be the winner in the decades long battle of political systems called the Cold War.

Whatever else followed (or didn't) His goal was clear, those assigned the job understood the strategy needed to succeed and it was magnificently achieved.

Yet from the moment those images of Buzz and Neil arrived on the world's television sets, our human space program has been lost - for a blatantly simple and obvious reason - after the first giant leap to take that first small step there was no plan for the next one, because there was no second question to be answered. Why go to the Moon? To beat the Soviets. Done. There was no serious conversation about why we should stay or go further or do more. And without a "Why?" whose answer is as compelling as that of stemming possible world domination by a competing "evil empire" that inspires people to do impossible things, they will settle for the possible, and mediocrity will reign.

And thus, for almost 50 years we've spent incredible amounts of money doing the possible. While pretty pictures fed an eager yet small group of passionate aficionados, the reality is our space program was simply and literally going in circles.

It is not the fault of the incredible people who dedicate their lives to this vocation. They are true and loyal builders of dreams, if only one were given them to build. Yet Kennedy is gone, Camelot's faded into history, and while the beast to the east rumbles and snorts and stomps, the crystal clarity of that old Soviet monster is no more a threat to the gates of our future.

Sure, presidents roll in and out of office and wanly lay out their own "Vision" on commemorations of our past astronautic glories and State of the Union speeches, but none has really done anything to assure it really happens after the end of the applause.

As if the menu were the meal, they have variously called for a return to the Moon, exploration of Mars, grabbing an asteroid, or simply preparing to go anywhere. Each new administration changes the recipe, each new Congress adds its own bacon flavor to the mix, and meanwhile, those back in the kitchen lose focus, lose hope and in many cases literally die off while waiting for the order - costing us experience and the ability to build a knowledge base able to achieve anything.

Meanwhile, without a shared vision the spaceflight community rips itself apart, fighting over the best destination and order, what we should do when and if we ever do anything and most recently, who should do the job of getting us there, the private or public sector? These fights are long, politically bloody, and at times almost at the level of religious. And no one wins - not really. Not NASA, not the companies, not the scientists, not those who dream of creating a civilization in space, and certainly not the US taxpayers who have spent almost a trillion dollars since Apollo on a national ticket to nowhere.

Here's the irony. We could have it all. There was nothing technical or physical stopping us from having moved on from Apollo to a permanent Moonbase, the development of industries in space and the establishment of the first human communities on Mars. We could have - we can - do it anytime we actually decide that it is our goal, organize ourselves to make it happen And Just Do It.

It has been over 50 years since the proclamation was made that sent us on our way to the Moon the first time. And Kennedy was right when he said we go not because it easy, but because it is hard...but we misunderstood what the hard part really was.

The hardest part of opening the frontier is not space. It is us. It is not physics, but fear that keeps us from greatness, not technology, but timidity that holds us to this planet and it is not danger, but indecision that keeps us locked on this rock, and will suck our civilization down into it to be the found fossils of the future.

Thus the core of the challenge. Without a clear top level goal based on a shared Vision what's left is a fight over tactics and resources to achieve them. Without an understanding of Why there can be no discussion of How and all that is left is to fight over What we are doing, Who gets to do it and how much they can money they can make pretending to do it.

It has to end - or we, in this incredibly fraught moment of time when we have birthed the weapons of destruction and the wings of the possible from the same egg, when we are teetering on the edge of an abyss and yet can still sense the call of the stars - we will fall. We will stop merely going in circles and begin the long slow spiral downwards into a future of less for all, and hope for none.

So we who are ourselves the children of Apollo must now set the course. And it is clear there is only one overarching, all inclusive, destiny level inspirational goal that can unite us to do something impossible. The human settlement of space.

We go out there to stay, that people have the right to risk themselves to build a better new world, and that by doing so they will help save and improve the old is The idea of our time.

There is nothing else as compelling, as clear in its description and meaning, as ingrained in our very being and history as the idea that our future lies beyond the borders of our present. It always has. It always will. And today, having covered the sphere of this one world, that future lies upwards and outwards to others.

So yes, as the man said, there is a reason for us to do this thing, and the others that are not easy but hard. That reason is because it is what we are meant to do as human beings.

While in his time the reason "Why?" was derived from war, this time it can be born of hope.

And while in his time he could only comprehend the first small steps, we have the ability to understand what a giant leap this endeavor can offer us and our children.

It really is up to us. We cannot wait for the next Kennedy to set us on our path to the stars.

We must be our own Kennedy, set the path ourselves and do what it takes to make it happen.

Except this time We Stay!