In the photo below, I'm kissing a woman named Kimberly Hall on stage in front of an audience of 200 people at a Crimes Against Children Conference in Mississippi just the other day.

I had just met Kimberly minutes before, but I couldn't help myself. I was so touched on an emotional level, that I just did what my heart told me was the right thing to do.

As the keynote speaker for the conference, I had invited some of the attending social workers and law enforcement officials on stage, and asked a simple question: why do you do, what you do for others?

When it was Kimberly's turn to take to the podium, her voice started to tremble, and she almost broke down in tears. However it was the emotion of joy as she described it as an honor for her to spend a portion of her own salary on "her children."

Of course the relationship between Kimberly and the children is not biological, but the bond is deep. As a social worker in the great state of Mississippi, Kimberly goes over and beyond, but don't tell her that. Kimberly takes the children to an occasional movie or the girls to go get their nails done.

These acts of kindness may not sound like much to some, but to an abused child, it means the world to them. Such validation can be the difference in a child conceding to a sense of hopelessness and feeling that no one cares or loves them or to the other extreme, doing good in school to one day change their circumstance. Sort of, as I often say, it doesn't matter in life where you start at, it's where you are going. I can tell you firsthand that the children will always remember Ms. Kimberly and her kind deeds.

I know because as an abused child myself who grew up poor in New York City, I will always remember Coach Bill. Coach Bill was a one-man army that touched thousands of inner city, mostly African American and Latino, males as our youth football coach. We didn't know it at the time, but Coach Bill would do his daily tour as a NYC police officer, and then would coach us in the football program. I don't know if he knew it, but Coach Bill was the only father figure that many of us had, and this police officer, who happened to be white, was an ambassador, if you will, of greatly improving race relations. He showed us that race didn't matter, and he taught us, leading by his own example, that one person can change the world. One good deed at a time.

That's why I couldn't help it at the event at Hinds Community College in Raymond Mississippi, and I just had to put a kiss on Ms. Kimberly's cheek. Americans through their deeds, like Football Coach Bill, and social workers bring out the best in us.

Social Workers are the fabric of our society, and I for one don't think we should take them for granted.

They are unsung heroes; as at the conference, I felt like a child meeting their sports hero in person for the first time. I watched as the police officers from throughout the state of Mississippi attending the conference came up when I asked them to, some dressed in their crisp police uniform, some in plain clothes with their firearm on their side, some wearing jackets with the word police on the back in bold letters. But one by one, all of these law enforcement officials told the same story, and it was that they do what they do because they want to help people. They want to make a difference, that it surely wasn't for the salary.

Later in a one-on-one conversation with a social worker, I asked her what's the best thing that ever happened to her on the job, and the worst. The best, with her face bright with pride and a million dollar smile, was being able to go to the high school graduations of some of the kids that she has helped. But the smile quickly went away, and then she lost eye contact with me as she looked to the floor, and said the worst is when you lose children. I was hoping her response wasn't what I thought, but then she said yes, she had seen several children on her caseload murdered.

It was a remarkably humbling experience that day in that large auditorium, and I really feel we should all hug a social worker today, and say thank you. If not a social worker, how about a teacher, or a police officer?

I will never forget the faces of the professionals I met in Mississippi. From the Executive Director of Human Services for the state Richard Berry, to administrators like Tasha Smith. These are the types of people that helped save my life. If we don't have people like this in society, what is the alternative? Well that was nearby as well. Only about 100 yards from the event was a local jail. I couldn't stop thinking about all the good we can do on "the front side of life," (education, building up the lives of Americans) as compared to the "back side." (Jails)

At one point or another in all of our lives, we will all need the assistance of a social worker. Someone to fight, and advocate on our behalf, and also to help those that don't have a voice in society to stand up on their own.

Several years ago, I was the commencement speaker for the School of Social Work at Yeshiva University in NYC. You could see the look on the faces of those graduates as well. They were excited to get out there and stand up for people. To help people. To stand for those that can't stand on their own. I advocated for Social Workers on radio, on TV at NY1, and on RNN-TV. I will always do so.

A voice for the voiceless. That's what social workers are.

Perhaps another term should be Angels on Earth. 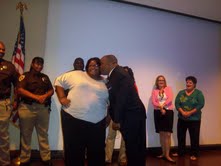