The formula is quite simple: media is the language of our culture. However, the educational system uses virtually no 21st century media, which results in a huge disconnect for students.

The solution is also quite straightforward. Media can engender critical thinking.

The average U.S. 8 to 18 year old participates in 10 hours and 45 minutes of media daily. Some of this is multitasking, but it is clear that their lives are dominated by media. By the way, these figures come from the Kaiser Family Foundation, a respected leader in the field of Media Studies. Primarily a health care organization they identified early on that Media Exposure was a major health concern (think eating habits, obesity, self-identity, substance abuse, violence). 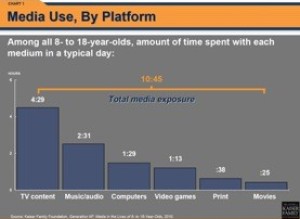 There is virtually no media literacy being taught in the American school system.
While media is the language of today's learner, our society is using the same definitions of literacy and the same educational paradigms that were in place when media was simply the written or spoken word.

This is entirely understandable since teachers have never had any formal media literacy training, and in most cases schools are repulsed by what the commercial media represents and wish to create an oasis from this onslaught. Understandable, but ignoring the rich resources offered by various media tools is a recipe for disaster. While it is impossible to eliminate the media in our lives and the lives of our children, it is not impossible to approach this human "tool" as we would any other, and think about how, why, and where we should use it.

Ignoring media in the learning system has some very negative consequences: it disconnects students from the joy of learning, in fact most of our citizens ultimately come to view learning as an undesirable task, looking forward to "getting out of school" has become a cultural norm. Our basic premise is that Nothing Is More Fun Than Learning. This begs the question, is school learning? Unfortunately most school experiences teach students (and teachers) to hate learning. Recently in a 4th grade class we had students making interactive maps; they literally voted to keep working rather than go to recess.

Since media is a language, Media Literacy skills can be used to effectively teach/learn other languages such as math, reading, and writing. The editing process is the same - learning to say exactly what you want to say. These skills are embedded in the CORE curriculum, they just tend to look very different (see a short video from the Navajo Nation on how making media addresses CORE issues.)

While there are other factors in play, basically whenever learning is disconnected from the learner, the innate joy of learning disappears and the learning system becomes highly inefficient. When the teacher is not even speaking the language of the learner, let alone dealing with relevant subject matter, then the incredible human capacity for learning and self empowerment is at great risk. We refer to it as our nation's cognitive surplus. Now imagine if students were allowed to speak their own language in school.

Ignoring Media Literacy also leaves our children defenseless when they are surrounded by the constant barrage of targeted media. Put another way, we are selling our children for a buck.

Watching media critically is like giving permission to think about what you have spent most of your life doing.

What does this man in the commercial do for a living? "He's a construction worker."
No, he's an actor.

What is the purpose of the nightly news? "To give us information?"
No, to show events that will give a high rating, so that they can charge more for their commercial time -- to sell you things.

Teaching media literacy is not some arcane technique that requires years of training, really it's just paying attention and asking questions. In fact all the time spent using media and denying our own intelligence makes all of us budding experts. And now the tools exist so that almost anyone can make media. Peeling back the curtain can change everything, forever.

Paying attention, critical thinking, using tools, being a human being.