"A good end cannot sanctify evil means; nor must we ever do evil that good may come of it." -- William Penn

The iconic images of recent protests in Ferguson, Missouri -- after the police shooting death of Michael Brown, an unarmed black teen -- have left Americans of all ilks wondering: Is this America? Military Humvees, still in camouflage and mounted with machine guns, in the hands of municipal police. SWAT teams of police in full riot gear, bristling with automatic weapons, pointed at a lone protestor with hands up. Have we become a police state?

Americans now have yet another "What have we become?" question to ponder. In 2012, after a four-year study, the Senate Select Committee on Intelligence (SSIC) completed a classified, 6700-page report on the CIA's detention and "enhanced" interrogation techniques of enemy combatants post 9/11. In April of this year, the bipartisan SSIC voted 11-3 to release the report's executive summary. After months of delays to allow time for CIA redactions, Senator Dianne Feinstein, the committee's chair, released the report's 528-page summary to the public on December 9.

Even after redactions, the details -- of renditions to secret detention sites in foreign countries and widespread use of torture during brutal interrogations -- are horrifying. Interrogation techniques included both psychological and physical torture: facial and abdominal slaps, beatings, "walling" (being slammed into a wall), ice-water baths, forced rectal rehydration and/or rectal "feeding," sleep deprivation for up to 180 hours, shackling for extended periods while in stress positions, isolation, sensory deprivation, loud music, enforced nudity, hooding, mock executions, and for some detainees, "water boarding," i.e, near-drowning to the point that some detainees turned blue and required resuscitation. In addition, some detainees were told that family members would be murdered or sexually assaulted. Others, given no waste buckets, were placed in diapers. One detainee, Gul Rahman, died from hyperthermia, after having been short-shackled to a wall, nude from the waste down, forcing him to sit on bare concrete for extended periods. 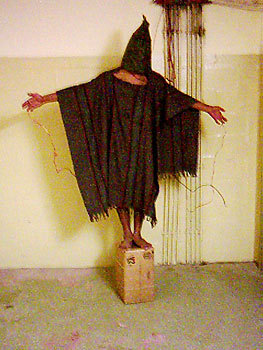 Thirty years ago, the United Nations General Assembly completed its Convention Against Torture (CAT). The CAT became the world's moral standard on June 26, 1987, following ratification by the 20th nation. By 2014, the CAT had 155 signatories, including the U.S., which ratified the Convention in 1994.

The CAT defines torture in Article 1 Part I as "any act by which severe pain or suffering, whether physical or mental, is intentionally inflicted on a person for such purposes as obtaining from him or a third person, information or a confession ..." Article 4 makes torture a criminal offense, and Article 8 establishes torture as an extraditable offense. Plain and simple, torturers are war criminals under international convention.

The U.S. has grossly violated international norms of civilized behavior. We have also broken our word. Why should American's care?

William Penn, the Quaker founder of Pennsylvania, once offered sage advice for many situations in the quote at the beginning of this article. The end never justifies inhuman means. There are many reasons -- legal, moral, practical, and spiritual -- why torture is both reprehensible and indefensible.

First, torture is illegal, as established by international consensus. Civilized societies do not torture. Period.

Second, it is immoral. "Do unto others as you would have them do unto you," states the Golden Rule, which is found in all major religions and specifically as Christianity's second great commandment. The commandment has no asterisks indicating which categories of "others" permit exceptions.

Third, from purely practical considerations, torture is ineffective. According to Item No. 1 of the summary's conclusions: "The CIA's use of its enhanced interrogation techniques was not an effective means of acquiring intelligence or gaining cooperation of detainees." Specifically, it did not conclusively produce evidence that led to the whereabouts of Osama bin Laden, nor has it been shown to produce information that could not be obtained by other means.

Fourth, setting the precedent of torture puts our own soldiers and intelligence officers at risk of torture should they be apprehended for interrogation.

Fifth, by stooping to torture, the U.S. undermines its own credibility and moral authority in the world. Specifically, Item No. 20 of the conclusions states: "The CIA's Detention and Interrogation Program damaged the United States' standing in the world, and resulted in other significant monetary and non-monetary costs."

Lastly but foremost, torture not only dehumanizes the one tortured, it also dehumanizes those enacting the torture. Put bluntly, torture degrades us as a species. For a first-hand account of a world in which such inhumanity is a daily norm, read Laura Hillenbrand's blockbuster Unbroken. This meticulously researched biography chronicles the hellacious experiences of Louis Zamperini, an American aviator held for two years in Japanese POW camps during World War II. (The film version of Unbroken will be released Christmas Day.)

No one understands what's at stake better than Senator and former presidential candidate John McCain, who was severely tortured by the North Vietnamese during his nearly six years as a Vietnam-War POW, some of it at the infamous "Hanoi Hilton."

I have often said, and will always maintain, that this question isn't about our enemies; it's about us. It's about who we were, who we are and who we aspire to be. It's about how we represent ourselves to the world.

McCain continues, "Our enemies act without conscience. We must not."

If Americans continue to permit -- by design, acquiescence, or inattention -- a perpetual state of warfare, the militarization of our police forces, and illegal and immoral uses of torture, we will soon become a nation of individuals who can no longer look into the mirror without averting our gaze.

Is this the America we want?

If not, then it is the duty of each of us to contact our legislators, demanding an end to all uses of and excuses for torture, and prosecution for all those who violate the consensus norms of civilized societies and nations.

Ironically, the only current or former CIA operative in prison regarding torture is John Kiriakou, who blew the whistle on waterboarding.