Every so often, the picture and title will roll through my Facebook feed as a friend shares it or a friend likes that another friend has liked it. Then come the tags as people rush to inform their friends that they simply have to do this.

"This is our plan! We should totally do this!"

Every time I see it, I want to scream.

I want to scream and warn them that that they are setting themselves and their friends up for one of the most epic failures of their traveling careers. Drawn in by the romance of the stock photography offered at the start of the post, and further enhanced by the the on-train photography offered once the journey begins, the reader succumbs to the fantasy offered by the article almost immediately.

But here's the thing: This is an awful, awful idea. In fact, it downright sucks.

First and foremost, most of this route just isn't that pretty to look at. If you take one thing away from reading my words, take this:

Seventy-five percent of his post is dedicated to 25 percent of the trip. There is a very specific reason for this.

I've done the route from Denver to Philadelphia. Here, I'll show you what it looks like. 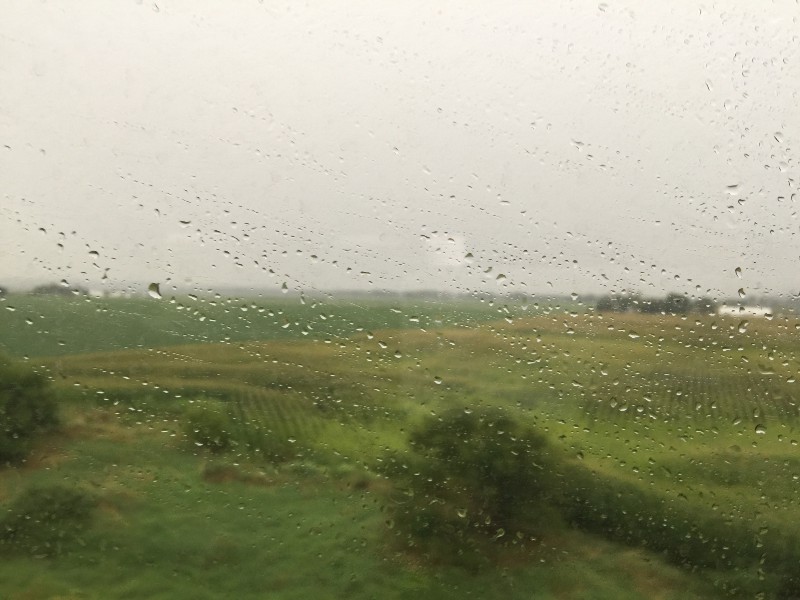 Is that something you want to look at, exclusively, for three days?

More than the lack of scenery, however, a trip like this comes down to people. And people are disgusting creatures. The cars will start to smell about a day into the journey. Some will try to clean themselves the best they can, given that they have no access to showers. Others will simply wallow in their own filth for the next few days and deal with it when they get home.

They will trash their seats and the areas around their seats. The things they will do to the bathrooms is something that I can't really put into words; which says a lot, given that I'm a writer.
By day two you're walking from car to car trying to find a bathroom that won't leave you feeling worse coming out of it than you felt when you went in. Part of you is actually ok with this because at least you're moving around for a few minutes.

"Seventy-five percent of his post is dedicated to 25 percent of the trip. There is a very specific reason for this."


Let's talk about those seats and sleeping. Unless you have space in the sleeper car, you can say goodbye to any form of physical comfort for the duration of your journey. Yes, they are larger seats than business class on most airlines. But you're not stuck in business class on an aircraft for days on end. This chair becomes your home for the duration of your journey. And it's not very comfortable.

There is only one redeeming quality possessed by the seats on a train: the 110 volt AC plugs next to them. You can plug in your electronics.

You will have to fight, however, to resist the urge to stick a fork in one of them to escape the situation you've put yourself in for the next few days.

Remember the picture of the burger from the post? That burger was $14. It isn't nearly as big as the picture made it look, and it doesn't come with anything to drink. The ribs mentioned were even more expensive. Nothing is fresh.

My point is this: you will spend a considerable amount of money on food that just came out of a microwave.

I noted that one of the pictures in the post included a salad. That person was lucky. One day, completely unable to stomach another microwaved meal, I asked for a salad.

I was told that they had no vegetables on board.

Sightseer Lounge cars are used as sleeping cars by those that can't take their coach chairs any longer. Trash gets left behind by slobs who, not content with trashing their own seat, feel the need to contaminate common areas of the train with their filth as well. Seating areas meant for up to three people are occupied by one person laying across them, shoes still on (of course), like couches in their own home. Staff walks by them and the collections of trash and does nothing about it.

Writing on trains sucks. I thought, perhaps quite naively, that I'd have a great writing experience on my trip. After all, like the author says, "The many hours on the train makes for a fantastic time to write."

"Don't forget, every single person you see in all of the pictures on that post smells like they haven't had a shower in days."


Train travel is not smooth. There is constant motion back and forth as the train vibrates on its suspension. There are speed adjustments. And there's the fact that you're already uncomfortable and now you have to sit in that chair, write, and be productive. Good luck with that.

Here are some other fun facts about this trip:

You're completely at the mercy of the weather. And, when traveling across the US, you will encounter weather. Know what's more boring that staring out the window at the same scene for days on end? Doing it when the train is moving at 12 miles per hour for 3 hours because of a flash flood warning in your area.

Amtrak trains are non-smoking but that won't stop your fellow passengers from lighting up. With hours upon hours between "smoke stops" (slightly extended stops along the route to pick up and drop off passengers that give smokers a chance for a quick nicotine fix) a fair number of them won't be able to deal with it and will simply smoke in the bathrooms. Within minutes, the smell will permeate throughout the entire car.

Pepsi only, no Coke, and beers are expensive. You stop caring about this after the first 36 hours because alcohol is one of the only things that can make the self-loathing of having made the decision to do this go away.

If you want to experience the romanticism of train travel then, by all means, take the route from California to Denver. I have yet to take this first part of the full cross-country journey. And even though I hated myself for taking the trip from Denver to Philadelphia, I still want to do the California to Colorado leg.

But do yourself a favor and get off the train in Denver. Get on another train and go back to California from Denver. Grab a car and go to Denver International Airport and fly somewhere. Just don't keep going past Denver believing that your trip through flyover country is going to be amazing.

There's a reason they call it flyover country. A travel writer with work published across a variety of big-name internet properties couldn't make 75 percent of the trip look as good as the first 25 percent.

Think about that before you book your ticket.