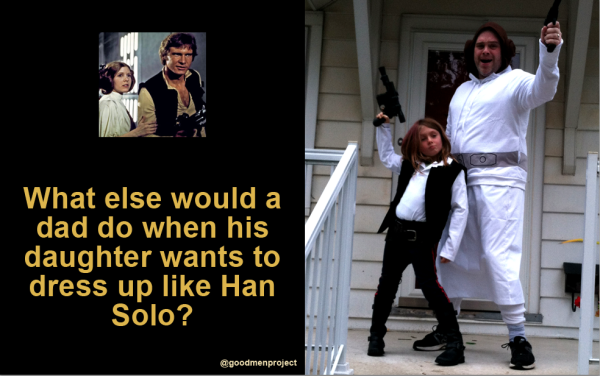 ... put on a Princess Leia costume, of course.

Ever since my daughter was old enough to make special requests, I've let her pick my Halloween costumes. Having kids at Halloween is a lot of fun, and watching the sheer delight that my daughter receives from having me dress up to meet her normally very polite requests is tremendously satisfying. Over the past three years, I've been Dr. Heinz Doofenshmirtz from Phineas & Ferb, Wreck-It Ralph, and Grunkle Stan from the fantastic kids' show Gravity Falls. All year, my daughter had been expressing her interest in going as Hermione Granger for Halloween, so I was preparing myself to throw together a Snape or Professor Lupin costume. But then, after I showed my 7-year-old Star Wars for the first time, she turned to me and asked...

"Do you think I could be Han Solo for Halloween?"

Immediately, I responded, "Yeah, why, of course, you could. That would be amazing. Why couldn't you be Han Solo?" And, even though I didn't want her response to come, it did. "Welll.... I'm a girl."

Screw that. I grabbed my laptop and started showing her some really excellent examples of other girls and women cosplaying as Han Solo. She nearly shrieked when I showed her one of the members of Team Unicorn (a geek-girl pop culture group that she loves) in full Solo regalia, and then I found this extremely cool tutorial on how to make a Han Solo costume for a woman from The Stylish Geek.

My daughter's eyes went wide. She was sold on the idea. This could happen. But then she turned and looked at me: "But what are you going to be?" She thought for a second and said, "Well, if I'm Han Solo, you should probably be Princess Leia, I guess..." She looked at me with an implied question in her eyes. And, c'mon, if I immediately told her, "YES, a girl can be Han Solo," it would've been pretty hypocritical of me to say, "Nope, a boy can't be Princess Leia." So, as quickly as I could, I said, "That would be FANTASTIC. I totally should be Leia."

And that's exactly what I did. Because that's what dads do. 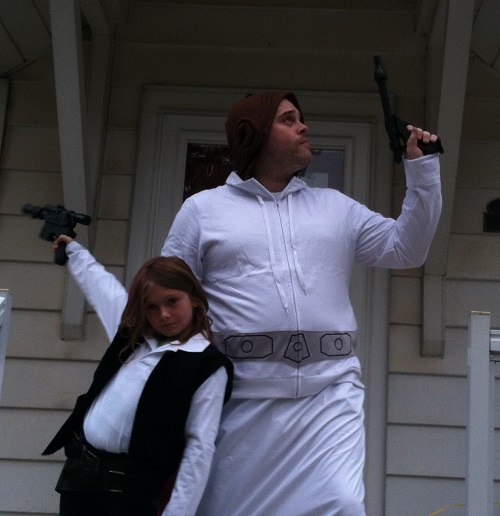 I'll admit -- my take on Princess Leia Organa isn't 100 percent flattering to Carrie Fisher, but, you know, I made do with what I had. I found an incredibly cool Princess Leia hoodie at HerUniverse.com that came with the trademark Leia hair buns on the hood, which made it hard to resist. The skirt is a Red Cross nurse's skirt from a local uniform store. And the thermal underwear and crappy sneakers? Well, it's Michigan and it was cold and we were going to an event at the local zoo, so, yeah, I dropped the ball on that one. I need to find some better Leia boots for actual Halloween.

All in all, I think my daughter and I will make a great pair for Halloween. We got nothing but smiles at the Halloween event we attended last night, and even got a few laughs when I came face-to-face with a mom dressed as Princess Leia and said, "Well, this is embarrassing..."

But I think my big takeaway from all this will be -- equality goes both ways. If I'm going to tell my daughter that she can do almost anything a man can do (excepting some very specific biological acts), then I need to show her that a man can do almost anything a woman can do, too... especially when it's something awesome like dressing up as a character from one of the best movies ever.

42 Fierce Halloween Costumes For Girls
More:
ParentsHalloween Halloween 2014parents-dads
Newsletter Sign Up
Raise the kind of person you'd like to know
Subscribe to our parenting newsletter.
Successfully Subscribed!
Realness delivered to your inbox