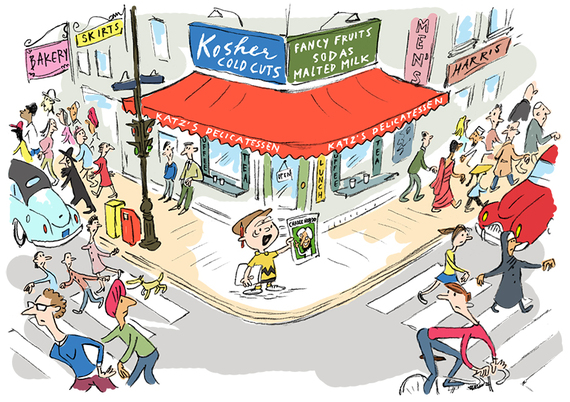 -- drawing by Eliane Gerrits Why were Americans not as outraged by the Charlie Hebdo shootings as were Europeans? If anything, the reaction in the U.S. has been strikingly muted. Here there were no mass demonstrations anywhere close to the scale of the Paris march where the absence of President Obama and other top-tier administration officials was noted with dismay.

The reason, I think, goes beyond this particular tragedy and tells us something significant about the strengths of the American character -- and one of its blind spots.

When I moved to the U.S. from Amsterdam in 2012 I felt as if I had entered the land of Charlie. But this Charlie was Charlie Brown, the winsome suburban protagonist of Peanuts, who lives in the suburbs, is fooled by Lucy holding the football, and at the end of every day ruminates about life with his dog, Snoopy. You're a Good Man, Charlie Brown.

The other Charlie, his nasty Parisian namesake Charlie Hebdo, is a different problem. Raw and offensive satire makes Americans uncomfortable.. Most newspapers and magazines dare not print the offending cartoons. The op-ed pages of the nation's leading newspapers have had very few pieces about the Paris massacre itself, most of them addressing the more general decline of France and President Hollande.

The New Yorker, the magazine for the literary elite, is known for its humor -- but never stoops to the equal-opportunity offensiveness of Charlie Hebdo. Its pages are filled every week with cartoon drawings showing older gentlemen in New York clubs, bored couples in bed, and talking dogs and cats. Its cover the week of the the murders in France reflected its characteristic distance. The Eiffel Tower ends in a sharp red pencil tip. No one will prick a finger on this drawing.

In comparison to the sharp elbowed free-for-all in the European press, America basks under the warm blanket of political correctness. Every editor, politician, corporate CEO, or university president is constantly attentive to the lethal risk of giving offense.

Not that crazy things are never said or done here. Au contraire. In America there is a mulligatawny stew of crazy cults and extreme beliefs. The church of Reverend Fred Phelps protests at funerals of fallen soldiers with slogans like "Thank God for dead soldiers" because it is believed that God punishes America for the "sin of homosexuality." Conservative Chief Justice John Roberts defended his right to freedom of expression: "Words are powerful. They can get people moving, moved to tears of joy and sorrow, and - as in this case - bring great pain. We can not react to that pain by punishing the speaker. "

The reluctance of the media to showcase controversial opinions has a historical explanation. The United States is the land of immigrants par excellence. From the beginning persecuted minorities and religious fanatics came here to be left alone. Puritans, Quakers, Amish, Methodists, Baptists - they all came to found their own "religious state" here. The land was spacious enough to keep the corrosive beliefs safely distant. Subsequent waves of Irish and Italian Catholics, Russian Jews, Buddhists, Chinese, Iranian Muslims and Indian Hindus made the mosaic even more complicated. Add to that the home-grown cultures of Mormons and Scientology. A drive through the Borough of Queens in New York City, with all its churches, synagogues, temples and mosques, feels more like a walk through the center of Jerusalem. The rawest wound of all dates to slavery. The Civil War did not achieve all of its goals until the Civil Rights Movement in the 1960s -- but, as Ferguson so poignantly proved, even that wound is not yet healed.

The common denominator in America is the tolerance of intolerance. Self-censorship and hypocrisy are the main instruments that keep the many groups away from each other's throats. So it is with stocking feet one tip-toes on the eggshell of E pluribus unum -- "From many, one."

Or, to quote from another cartoon philosopher -- Thumper, the bunny from Bambi, "If you can't say something nice, don't say nothing at all."