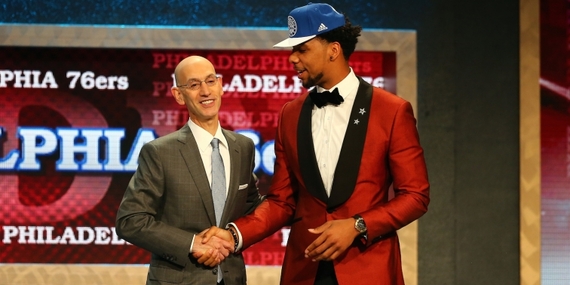 Most basketball fans don't know the name J.P. Tokoto. That's because he happened to fall to the second round of last year's NBA draft, and things don't go so well when you're drafted in the second round. Tokoto, an all-ACC defender and ridiculously athletic forward at UNC, was drafted 58th overall by the Philadelphia 76ers. Four months later, he was released from his one-year, minimum salary contract and spent the rest of the season as a basketball player without a basketball team.

Tokoto's story is a familiar one to the 30 players who find themselves drafted in the second round every year. Of last year's second rounders, two-thirds of them didn't get on the court in an NBA game this season. That's compared to only one first rounder who didn't see NBA action this year - Nikola Milutinov, who was drafted by San Antonio. Which, if you're drafted by the Spurs, you might as well be drafted by Air France because that's where you'll be headed.

Take it back five years and you'll find just four second rounders from the 2010 draft still on active rosters, and none of them are starters.

So why does this happen? Is the talent drop off between first and second round prospects just that steep? First round players are just that much more talented?

The common sense answer is yes, second round players aren't as successful because they just aren't as good. The NBA is a star-driven league after all, and stars don't get drafted in the second round. But dig a little deeper and you'll see there's something more going on here. The NBA requires all first round picks be given guaranteed contracts, but this rule doesn't apply to the second rounders. Meaning, if there are two draft picks competing for one spot on the roster, the second round guy will lose most every time.

A 2012 study by a Harvard student attempted to examine the career effects of draft position by comparing the outcomes of the last four players taken in the first round with the first four of the second round for every draft since 1985. It's safe to say that the talent difference between the 30th and 31st picks is minimal at best, but the study found that the late first-rounders had "significantly better careers" in every statistical category.

Second round picks have three options after draft day: scratch and claw their way on to an NBA roster, play in the D-League, or play internationally. Of the three, the D-League is the worst. The top salary among all D-Leaguers is just $25,000, with the mid-level salary being $19,000. The more preferred option in most cases is international ball, where starting salary is around $65,000 and you can compete in meaningful games against high competition, all while retaining your NBA rights with the team that drafted you.

The problem is, many American players don't like the idea of going overseas, and GM's will use this as leverage to get players to sign terrible contracts. Over the last few years, the new trend is to pressure second round picks into signing four-year deals, earning at, or close to the minimum for all four. This means, even if a prospect outperforms his expectations, it will be four years before he earns anything close to what he deserves. In a conversation with ESPN's Zach Lowe, Mark Cuban said, "With players we think have a big upside, we will only do three or four year deals. If their agents don't like it, we let them go overseas."

And these awful deals have a ripple effect that makes a second round prospect doomed from the start. If a player projects to be a possible second round pick, agents become weary of taking them on as clients. Sports agent Jared Karnes told Forbes,

"From the moment a player signs and begins pre-draft training, an agent will cover all costs. These costs may include, housing, travel, transportation, gas, groceries and other living expenses, strength and conditioning training, skills development training, exercise physiologists, and nutritionists. These 'investments in the player' may or may not be reimbursable."

Agents don't sign players to make money off their rookie contract, they sign to make big bucks off their second deal. But, if there's a chance that second deal won't happen, why waste your money investing in him? Even more so, why invest in a guy that might not even be guaranteed money at all?

Despite all the obstacle placed in their way, some second rounders still find a way to success. Golden State's Draymond Green was drafted 35th overall by the Warriors, made the roster, and quickly found his way into their rotation. The Heat's Hassan Whiteside (33rd overall) was signed and waived by the Kings and then signed and waived by the Grizzlies twice, while playing in the D-League and internationally in between. But these guys are the exception, fortunate enough to land on teams willing to develop them into some of the league's top defenders.

Every draft is filled with work in progress talent like Draymond and Whiteside, but for the most part, the NBA has failed to offer these players a legitimate opportunity to develop their skills. The good news is, there are plenty of options available. The D-League has potential to be the domestic development system that both the teams and players desperately need - if the NBA is willing to invest. There are currently 19 D-League teams, expand it to 30, assign each team to an NBA squad, give them a real salary, and you've got yourself a full-scale farm system.

A fully revamped D-League would also likely necessitate an expanded draft, something GMs have been pushing for a while. And that would open the doors to allowing high school players to enter the draft, since even if their not ready for the NBA, they can take time to develop in a real way, and make a decent salary while doing it. While it might hurt the recruiting strategies of John Calipari, this move would definitely be in the best interests of the players.

The way the system works now, second round picks are set up to fail, and if you refuse to play by the rules, you're guaranteed to. JP Tokoto didn't want to play internationally, he also turned down a long-term contract in favor of a one-year deal. And as a result, he was cut before the season started, and was not picked up by any of the 29 other teams.

When the 2016 draft begins, the focus will be on what awful team Ben Simmons goes to and where Buddy Hield will be chucking up 30-foot shots. But the most important part will come a few hours later, when the lives of young men will be decided between the 30th and 31st pick.