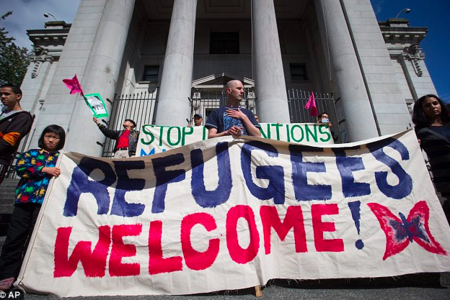 A few months ago one of my big-hearted friends confided to me, "I really want to bring a Syrian family here"--here being the North Carolina Outer Banks, our home.

As it so happened, only two days earlier I'd heard a clergyman voice the same desire.

I deeply honor the sentiment behind this. Yes, let's share our abundance in an open, loving way. Everyone will benefit, us as well as the families we help.

But why would we bring people whose lives have already been ripped wide open to a place where there is no mosque, no Islamic presence, no language spoken but English and a little Spanish, and virtually no ethnic diversity? A place, moreover, where there is a good measure of anti-Islamic sentiment?

These questions have continued to nag at me. So I decided to look into them.

It's a timely issue. President Obama pledged to give sanctuary to 10,000 refugees from the Syrian war during fiscal 2016. But in April, with the fiscal year half over, State Department figures showed that only 1,285 new Syrian refugees had been resettled here. The Administration still hopes to speed the process and meet its goal.

Candidates are vetted through the United Nations High Commissioner for Refugees, which works with nine volunteer agencies in the U.S. One of these is Episcopal Migration Ministries, which has a local affiliate close to us, the Interfaith Refugee Ministry (IRM), in New Bern and Wilmington, North Carolina.

Susan Husson, executive director of IRM, says her organization hasn't resettled any Syrians as yet and hasn't received word that it will. Most of the refugees they've helped in recent years have come from Burma, with a few from Colombia and Cuba. The agency resettled 167 refugees last year and is estimating it will find homes for another 200 this year.

But even if IRM were to be flooded with Syrians needing homes, there are still stumbling blocks to placing them in communities like mine--and not the obstacles I envisioned:

* All vetted refugees are asked if they have friends or relatives anywhere in the U.S. If so, the national agency contacts these "U.S. ties" to see if they would be willing to help the refugees acclimate to their new homes. There are no Syrians here to act as hosts.

* National protocol calls for settling refuges within 50 miles of the affiliate agency's offices so case workers can easily check on them. We're simply too far away.

* Not many towns fit the profile of a good host community. Are jobs available? What's the cost of living compared to wages? How easy is it to get around? Such factors are key to helping families become self-sufficient in four to six months, as required, Husson said.

* My initial concerns--that communities with low ethnic diversity and a near dearth of Muslims would be unsuitable--don't really factor in, Husson said. Nor is their religion considered in their placements. Yes, care must be taken to settle them among a population that will accept them. But "people find their way," she added. "That seems harsh to say when you haven't worked with refugees, but it's true."

The people IRM serves have clearly suffered, Husson said. But staff members and volunteers are trained to help the new arrivals rely on their own skills and strengths.

"They were responsible people in their own cultures. They just don't know what to do here," she said. "We're here as a safety net, but we're not here to do everything for them or run errands for them."

Occasionally a volunteer will get a call from a refugee family with a request like, "I forgot to pick up milk at the store," Husson said. "The volunteer's first thought is, I can do that for them." But in such situations volunteers are trained to step carefully. "There's a fine line between enabling them and not doing enough," Husson said. Staff members and volunteers must strive every day to walk that line.

Husson made it clear that there are plenty of deserving refugees already in the U.S. I asked her how those of us who live outside the resettlement communities can help.

She was silent for a moment. "We can always use donations," she said, "but giving money can be so impersonal. People want to do something." This is an avenue she's just started exploring, but "we are open to any idea that we can make work."

For example,a church or community group could adopt a refugee family and furnish, say, a bedroom. The need for furniture, kitchen utensils, and comfort items like stuffed animals is always pressing, "even when we think we're well-stocked," Husson said. "You can suddenly get a family with five people and the furniture's gone overnight." Used goods in serviceable condition are perfectly acceptable.

Ideally, she added, some members of the group donating the goods would be able to meet the family and spend a few hours with them.

"Part of the real joy of working with refugees is to see that it does make a difference. They go from scared and looking over their shoulders every few minutes to accepting you as a friend they can trust."

I hung up from my conversation with Husson with a sense of excitement. My community may never find a way to work directly with Syrian refugees. But there are many, many other displaced people who need our help.

The nine organizations that work with the U.N. High Commissioner to resettle refugees in the U.S. are: Church World Service, Episcopal Migration Ministries, the Ethiopian Community Development Council, the Hebrew Immigrant Aid Society, the International Rescue Committee, Lutheran Immigration and Refugee Services, the U.S. Committee for Refugees and Immigrants, the U.S. Conference of Catholic Bishops, and the World Relief Corporation.

The web site of each will list their local affiliates. Maybe there's one not far from your home that could use some help.