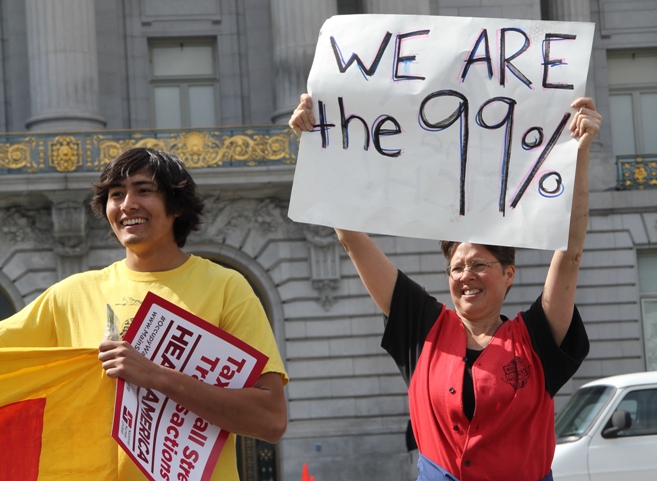 Protesters gather in front of City Hall in San Francisco.

"We are the 99 percent" is now a household phrase.

Once the Occupy Wall Street movement gained steam, the slogan was everywhere: in headlines, embedded in our social networks and plastered on our sidewalks. But where did the phrase come from? And how did it catch on?

Following the trail is complicated-- it's hard to pinpoint where it began. After all, the Occupy movement is intentionally leaderless and decentralized.

Some credit Anonymous, the hacking group that is known for disrupting PayPal and organizing protests against Bay Area Rapid Transit. Some people say the term came from Adbusters, the non-profit "culture-jamming" magazine that initiates activist campaigns. The magazine put out the call to occupy Liberty Plaza in Manhattan on September 17, and is credited with generally raising the profile of the Occupy Wall Street movement. Some refer to academics, like David Graeber, author of "Debt: The First 5,000 Years" and instructor at Goldsmiths, University of London who was among the earliest group of protesters in Zucotti Park.

And then there's David DeGraw.

David DeGraw released a report on AmpedStatus.com on September 29, 2011 called, "A Report from the Frontlines: The Long Road to #OccupyWallStreet and the Origins of the 99% Movement."

DeGraw is an independent journalist who lives on Long Island, New York. He's the editor of AmpedStatus.com. He claims he was talking about "the 99 percent" long before other journalists and activists were was paying attention. "I consulted on a film called 'America Before the Bubble Burst,' in 2006 which dealt with sub-prime lending and all the mortgage-backed securities... I've been investigating it, I've written hundreds of detailed reports on it," he said.

In February 2010, DeGraw published a book called "The Economic Elite Vs. The People of the United States of America." He says the last section of the book was a call to action, using the concept of 99 percent of American income earners.

"In the course of my research I realized that the 400 richest Americans had as much wealth as half of the population combined... The inequality of wealth between the top one percent and the remaining 99 percent was at an all time high," said DeGraw.

"So what I did was I called for 99 percent of us, whether you are a liberal, conservative, progressive, libertarian, independent -- whatever your political leanings are -- there were core common sense common ground issues we could come together and agree on. This 99 percent platform came about and it was really about uniting Americans against what we consider a system of political bribery, which was campaign finance, the revolving door between Washington and Wall Street, and lobbying," said DeGraw.

DeGraw's writings didn't immediately take off, until, through a series of random circumstances, he hooked up with Anonymous.

The newly formed A99 group began releasing videos and calling their mission Operation Empire State Rebellion" (#OpESR). They released their first one on March 12 of this year, and called for Ben Bernanke to step down as Federal Reserve Chairman. On June 14, A99 led an operation to occupy Liberty Park, but only 14 people showed up, and only four of them were willing to camp out over night. "It was a failed attempt," said DeGraw. But, it was a failed attempt with a fortuitous side effect.

Gary Roland didn't always view the banks as the bad guys; in fact, he worked alongside them, as a construction manager for Blackrock's Granite, Diamond, and CDF Real Estate Funds. "I was working on 45th Street in Midtown Manhattan, flanked by the likes of AIG and BEAR Sterns, and to see these big firms collapse around me, I realized that there had to be something more, so I started on this journey," said Roland.

Roland was one of the four protesters who stayed overnight on June 14th.

"I had advocated for the use of the camp-style general assembly sort of protest, and not enough people showed up," Roland said. He ended up walking over to "Bloombergville" - a group of activists protesting the state budget cuts that was using the General Assembly format for meetings.

OPESR, A99, Bloombergville, and the NYC General Assembly were now connected in one network.

The parties within the network brainstormed about when to return to Liberty Park, according to DeGraw, but nothing took hold until Adbusters came into the picture calling for an occupation on September 17th. All parties jumped on board. Adbusters was able to rally their network of magazine subscribers consisting of "artists, writers, and cultural dissidents" that totals 94,739, according to their website, in a way that the network couldn't up until that point.

One of the main criticisms of the Occupy movement is that there are no specific demands. DeGraw pointed out that to an extent, that's by design; Adbusters wanted the movement to crowdsource its ideas. "We had set demands that we tried to rally people on, and the fact that Adbusters phrased it as a question, 'What are your demands?' That was really key," he said. "Even going into September 17 there was a group of us that was like, 'Look, we need to have set demands.' But we respected the Adbusters call," he said.

"Looking back, I think it was pure genius not to have demands going in. It really made people feel like... they will have their own voice." said DeGraw.

Not only is Occupy Wall Street without specific demands, but without specific leaders. Or rather, named leaders. Anonymous's role in helping the movement to take off is essential, according to both DeGraw and Roland. "I even look at the Occupy Wall Street movement as an offline version of Anonymous. It's so decentralized ... it's almost like a survival of the fittest of ideas, so whoever puts forth the best ideas it tends to become the reality of the movement," said DeGraw.

And as for that 99 percent idea?

We first noticed the "We Are The 99 Percent" slogan on the Tumblr page that started publishing in early September. The "We Are the 99 Percent" Tumblr page consists of photo-postcard submissions from people explaining why they are victims of the economic system, with the statement, "I am the 99 percent" at the bottom. Within weeks of the launch, the site was posting over a hundred photo submissions each day.

DeGraw's back story was lost somewhere in the hype of the Tumblr page going viral, the growing support for the movement and the adoption of the slogan by the Wall Street campers.

DeGraw had nothing to do with the Tumblr page, but said he loves it.

New York Anonymous Impact We Are The 47 Percent Tumblr