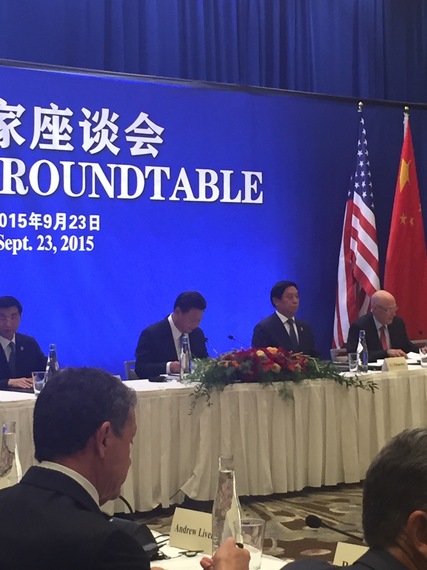 In Seattle last week, the Paulson Institute, with its partner, the China Council for the Promotion of International Trade (CCPIT), brought together heads of leading U.S. and Chinese companies for a roundtable discussion with President Xi Jinping about economic and business relations between the two countries. The CEOs identified key opportunities for working together on issues of global concern, as well as areas for cooperation to promote greater trade and mutual investment.

Institute Chairman Hank Paulson opened the discussions by saying, "Trade and economic ties are the glue that binds our two nations through the ups and downs of the bilateral relationship. And there are a number of pressing issues before us: the slowing of global economic growth, ongoing cybertheft, changing foreign policy interests, and further environmental deterioration from climate change."

Noting that the Chinese and U.S. economies are increasingly integrated and intertwined beyond just trade and investment, one CEO said that "one [country] can't win without the other."

Building on that sentiment, the 30 CEOs in the room highlighted a shared sense of global responsibility. Business leaders have an obligation to do more than just business, they said. They can exemplify how progress can be made between the two governments by showing how to cooperate in solving global problems. The candid discussion led to agreement on the need for business leaders from both countries to come together to advocate for progress on key global issues and to do what they can through their own businesses to find solutions.

Mitigating climate change and food safety were identified as areas of potential cooperation, as well as the growth and impact of the Internet economy, which purveys Internet cars and refrigerators while harboring cybertheft and driving job losses. Internet hacking is a concern to all companies: Alibaba, for example, has said that it is subject to 90 million internet attacks a day. Hacking is an issue of critical concern for U.S. companies as well.

The opening of new markets, which will come in part by reaching agreement on a high-standard Bilateral Investment Treaty, and support for China's economic reform efforts were also discussed as means of supporting global economic growth.

The roundtable discussion also specified industries in which increased trade and investment would benefit both the United States and China. China's projected massive increase in tourism from the current 400 million overseas visitors to 1.2 billion in 2025, for example, will open opportunities for hotel operators such as Hyatt and Fosun's Club Med, and will also drive increased sales of Boeing aircraft.

Agricultural trade and clean technology are other areas of potential mutual opportunity. Shuanghui's exports of pork from the United States have increased 47% since that company's purchase of Smithfield hams. And the U.S. has leading technology that can be deployed in China's war against pollution--from energy-efficiency equipment for buildings to natural gas installation processes. The U.S. is also a potential market for many of the clean-tech products that China is mass-producing, such as solar panels.

Entertainment and culture was another sector for cooperative exploration. Demand is high in China for TV, movies and online content--and China has four of the top ten Internet companies in the world. U.S. movies, TV, entertainment parks are global leaders that can increase their presence in China through greater market access and protection of intellectual property rights. The U.S. is also looking to produce domestic content for the Chinese market. Collaborative efforts can bring the best of U.S. creativity to meet Chinese demand.

President Xi responded to these discussions by noting that trade and investment between the United States and China is mutually beneficial. While China's economic growth may be slowing, it still accounted for 30% of global growth in the first half of 2015. China plans to continue with its reform agenda, continuing to expand market access for foreign films. China's reform and opening up, Xi said, "will be like Alibaba's 'open sesame'; it will open but it will not close."

Xi also echoed similar themes to those raised by the companies present. The import of commodities, which has dropped significantly this year, will stabilize over time but will still hold tremendous potential. He noted that China's intended plan for urbanization will result in $200 billion in infrastructure opportunities alone, with exponential benefits corresponding to growth of the middle class consumers.

China, Xi said, will continue to be a major market for U.S. companies: He noted that more than half of Boeing's airplane sales are to China, and that Starbucks continues to expand rapidly across the country. With a smile, Xi told Disney CEO Bob Iger that he had voted in favor of Disney's proposed theme park locating in Shanghai. As Chinese companies expand overseas, there will also be opportunities for third party cooperation in countries outside of China.

Xi also said that the long-term prospects are good for economic growth in China. The short-term challenges are due in part to proactive macro regulation changes, protracted problems that must be addressed in the Chinese economy due to an outdated growth model, and a slowdown in the world economy, he said. There is still significant room for growth in the investment between the two countries, he added, which is why China hopes that a BIT can be concluded at an early date. Xi's conclusion: the potential is great for cooperation between the two countries' businesses through trade, investment and joint problem-solving of urgent global concerns.

The Paulson Institute was honored to host this productive dialogue in Seattle. Several of the business leaders advocated that this event should reconvene during future visits by U.S. and Chinese leaders. The Paulson Institute believes that ongoing engagement is essential to fostering increased understanding and resolution of many of the key challenges facing both countries. And if the United States and China can reach agreement on our most pressing global challenges, greater business cooperation may follow.