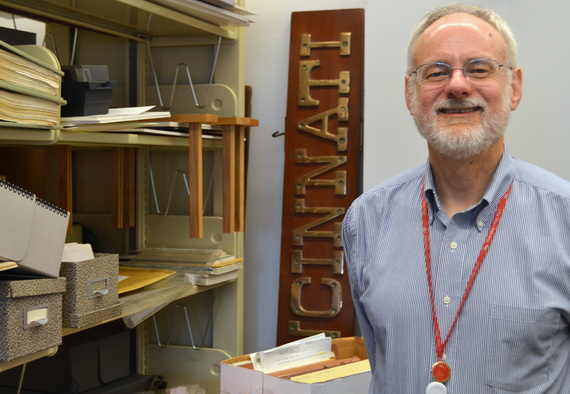 The idea for this story started, innocently enough, with a short article in the current issue of LibraryLinks, the newsletter of The Public Library of Cincinnati and Hamilton County.

Rather innocuously headlined "Library donations from the early 1900s," it noted that the library back then received "several donations that might seem a little unexpected by today's standards."

How unexpected? The library's annual Administrative Reports from 1901-1905 listed: one snail, one tadpole, a ticket to the Opera House, one Egyptian figurine, more snails, an aquarium and three goldfish, the Declaration of Independence, an exhibit of cocoa, shells, cotton specimens, beetles, butterflies, moths, slate, pampas grass, an oriole's nest, four Indian arrowheads and -- strangest of all -- rat skins.

Alas, the article didn't explain why anyone would want to donate, say, a snail or a rat skin to a library, so it left an unanswered question: A hundred years ago, was the concept of a public library different than it is today? Was it also a kind of natural history museum or zoo where the task of collecting included far more than just books?

I'd written before about some of the other ephemera collected by Cincinnati's library, like restaurant menus and sheet music. But those were printed material. Somewhere in the stacks, were there also collections of beetles and butterflies?

So I made an inquiry. I was not expecting the seriousness and thoroughness with which reference librarian James Mainger, 58, of the Main Library's Genealogy & Local History Department, took on the assignment.

His findings, backed up with excerpts from period reports to the (head) librarian from that time, proved very illuminating. They show that the concept of progressivism -- trying new things -- in library outreach goes back at least a century here.

Librarians were innovative in ways to lure children into reading, especially children who maybe weren't exposed to books at home.

That explains the strange donations, Mainger believes. In his email, which I have edited for space and other considerations, he explained his reasoning:

"The only mention of displays or exhibits of natural objects in these [Administrative] Reports comes from the Children's Department. The donations of snails, goldfish with aquaria, rat skins, etc. suggest that they were for children's programs. The Children's Department had only just opened in 1900, and the librarians thought that real objects would help in keeping the children interested while they were oriented toward books and reading.

"The library annual reports prior to 1900 show no similar donations of natural objects, [so] I'm not seeing evidence in these reports that the library sought to offer a miniature natural history museum. The librarians appear to be solidly into literacy and book reading.

"Looking at the donation lists in the annual reports one discovers that the 'odd' non-book donations given to the Library for those years were scattered among hundreds of book donations and make up just a very small fraction."

Indeed, Mainger pointed out that the 16 donations listed in the current LibraryLinks represented the entirety of such unusual non-book items for the years 1901-1905.

Further illuminating were the excerpts Mainger provided from Children's Department reports during those years. They offer a compelling glimpse into life for Cincinnati children, especially the impoverished or working-class ones, at the turn of the 20th century.

For instance, Emma Butler, a Children's Room employee, told about activities of said room in 1903, when exhibits on quartz and fur were offered to attract more children: "At the noon hour, the room has been crowded with boys who work in the surrounding factories and business houses," she wrote in the reports.

She also addressed home libraries -- a radical example of outreach. "The main object of the home libraries is to put books in the hands of children who are either too young to come to the central library or do not know of its existence," the report explained.

"First a visitor must be secured, then a clean and suitable room in which the meetings may be held, and finally ten children must be gathered from the house if the place of meeting be in a tenement, or from the immediate neighborhood."

This article started off like it would be funny, or at least offbeat. But, ultimately, it's poignant to realize the efforts made to reach and engage young readers who needed it.

(A slightly different version of this story ran in Cincinnati CityBeat on 63-15)
Photo of James Mainger provided by Public Library of Cincinnati & Hamilton County, Ohio.)