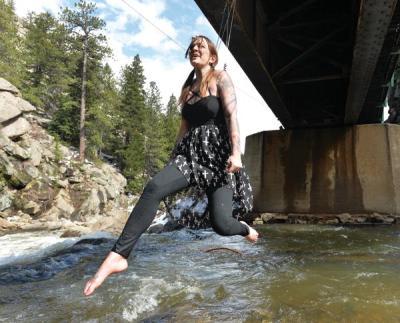 Lisa Marteau "walks" through a creek as she swings from a bridge by pins secured to the skin on her back. (David R. Jennings / Daily Camera)

The first thing I ask Lisa Marteau is: "Why?"

Why would people want to hang from hooks pierced through their skin?

The reasons are different for each person who participates in this activity known as body suspension, and the Boulder woman is careful not to make generalizations. She tiptoes around her words. She does not want to misrepresent the community -- to further distort society's misconceptions and opinions about this unusual hobby.

It's unusual enough that she let me watch her do it.

Nearly an hour past Coal Creek Canyon, another 15-minute hike across muddy, active railroad tracks (as in, a charging train nearly took me out) and down below an isolated bridge above a rumbling creek, the 27-year-old woman hangs from two large hooks temporarily pierced into her back, attached to ropes strung through a rig. She pikes and twirls, like a floating ballerina, a living puppet anchored to a carabiner. She smiles as the sunshine strokes her cheeks.

This isn't what I expected.

I watch from the shore. It's silent, except for the rushing river. I'm chilly, as a storm blows in, and Marteau's skin is red and goosebumped with the chill.

Her fresh piercings are bleeding a little, but in the moment, the adrenaline rush numbs any pain, she says. The sensations come later, after the bars are removed, and even then, it doesn't exactly hurt, she says. The spots feel sensitive, she says, just as one feels after a new piercing. Her back is spotted with small white scars, reminders of every time she has suspended.

A friend pulls on the other end of her rope, and she rises higher above the rapids. The water is the only sound for miles. Then Marteau giggles.

She calls this her happy place.

She doesn't exactly want us here. It took me five months to convince her local suspension "crew" to talk publicly.

But even more important to her, she does not want to hide her greatest passion, or feed the misunderstandings through silence, or let the more prevalent negative media reflections define modern suspension. That's why she invited me to watch.

She says she does not expect everyone to understand or even accept it; members of her own family and friends have ostracized her and asked her not to share her suspension photos on social media.

That's where I first learned about it. Some of her photos showed up in my news feed: her hanging by tiny hooks from her knee skin, suspended from her shoulders and arms in a crucifix. Soon, she received a notice from Facebook that the photos had been removed for "graphic violence" and "drugs." One of her friends had reported them as inappropriate.

"I don't think they understood what they were looking at, and it bothered them that they didn't understand," Marteau says.

Drugs or any kind of physical or mental numbing would cheapen the experience, she says, and although some people might consider the photos "graphic," she says suspension is not violent. It's consensual and safe, she says. For her, it's a deeply meaningful ritual.

"With every single suspension, I go through something where I grow, and I can feel a spot in my mind," she says. "I find that spot. I get into it. It bounces around, and I stay up until I lock down and feel like I've experienced what I need to do."

She says suspension is empowering and has taught her self-love: "Look what I can accomplish with my own body. Look what I'm capable of."

There's this moment between standing firmly on the ground and then lifting up your feet up into the air, she says. Trusting that your skin will hold you. That's the hardest part, and the best part, she says.

"You hang from the one organ that's holding you together, and it pulls away from you and you're completely raw," she says. "You open up your body."

That physical opening becomes a mental opening, and then a spiritual one, she says.

"You get to fly without wings." 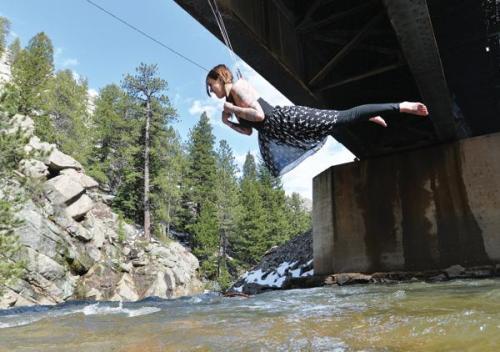 People have been practicing forms of suspension for ages -- a version of it is an ancient Native American ritual -- but modern suspension remains relatively rare, especially around Colorado. The movement is growing, though, fueled at least in part by international expos and a greater acceptance of body modification.

Suspension.org lists organized suspension groups in most states (11 in Texas alone), as well as 26 countries, from China to Israel to Germany to Mexico.

For some, suspension is another extreme sport; some participants say they get the same adrenaline rush people get from bungee jumping or racing a bike down a hill or climbing the Flatirons.

In fact, the "practitioner" who sets up the suspension with Marteau's crew, Nick Aconite, is a professional body piercer.

He has attended multiple suspension trainings and studied it carefully to ensure safety and sanitation, above all. He brings large, sealed containers of equipment to the suspension site, the same things you would find in a reputable piercing shop: gloves, sterile needles, a sharps disposal bin, sanitizer. He takes his time finding the right areas to pierce. The back is popular. People also suspend from their knees, arms, chest or even their face -- depending on each individual body on that particular day and the person's experience and desires.

Aconite urges people to never try suspension without the help of a trained professional.

"If you don't know what you're doing, people can tear out or die from infection. People can get caught by hooks," he says. "It would be like any other extreme sport, like rock climbing. There are inherent dangers. You need to know what you're doing. You can do it safely, but it isn't something that should be taken lightly."

Beyond the piercings, one needs to be trained in rigging. Artisan companies specialize in suspension rigging plates and locking hooks, typically modeled after rock-climbing equipment and theater stage rigging.

But the most challenging part of suspension is not the procedure, or even the physical sensations, Aconite says.

"It's whatever's going on in your head. Getting over your fears," he says.

___________
This story originally appeared in the Boulder Daily Camera. Read more stories about the weirdest city in America, Boulder, Colorado, here: Only in Boulder.