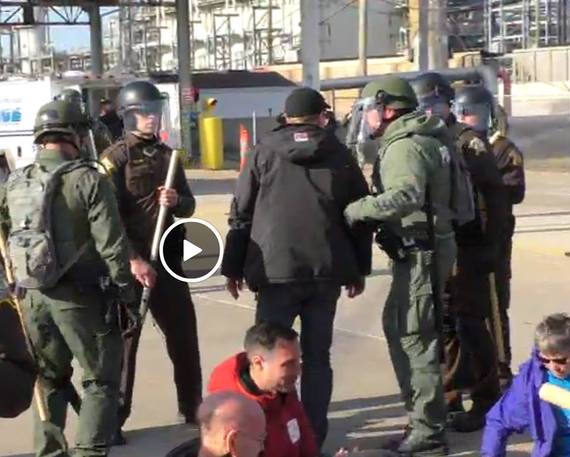 "What are you going to wear to get arrested?"

That's a question I never thought I would hear from my wife, but it was what she asked me as I mentally prepared to be arrested as part of a non-violent direct action protesting the petroleum industry and demanding a just transition to renewable energy this past Sunday.

A couple a years ago, I didn't even recycle. But the past two years has been a gradual journey leading up to last Sunday when I was arrested as part of Break Free Midwest which took place at the BP oil refinery in Whiting, Indiana.

Break Free Midwest was part of a coordinated series of protests against the petroleum industry -- 20 in all -- taking place on six continents over two weeks in the first half of May. It was the largest act of civil disobedience in the history of the climate change movement. In addition to rallies and marches, each of these actions had a direction action or civil disobedience component, in which some of the protesters put themselves at risk of being arrested, and many were in fact arrested, including myself.

Break Free actions took place at some of the largest sites of global petroleum industry, including power plants, refineries, ports, mines, and waste sites. Our part of the action took place at the BP oil refinery on the shore of Lake Michigan, in Whiting, Indiana, which is 30 miles from where I live. The action drew over 1,000 people mostly from the Midwest and Great Lakes region. Many people who had never been to the area discovered first-hand how unbreathable the air in Whiting and surrounding communities is. We had specific demands, which included creating a moratorium on all new pipeline projects and creating a regional citizen review board to oversee all fossil fuel related industry projects. But the larger contexts is that we want BP shut down and a just transition to renewable energy worldwide. 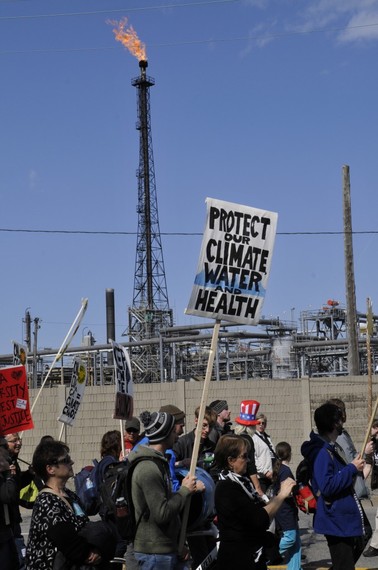 The Whiting refinery was an ideal focus for the action. It's the largest tar sands refinery in the country. If you don't know, oil from the tar sands is the dirties kind there is, and the pictures of what is being done to the Canadian wilderness are truly devastating. A recent multi-billion dollar expansion project enabled the Whiting refinery to process crude oil from the Canadian tar sands. Not to mention the fact that, two years ago, BP spilled 1,600 gallons of oil into Lake Michigan, which is our region's source of drinking water. In addition, a Koch Brothers company has been permitted to pile petcoke, a toxic petroleum by-product, in the region, which has been left uncovered and allowed to blow freely into neighborhoods, when all that is needed is to cover it with a tarp!

The timing of the protest was also auspicious. As Bill McKibben, founder of 350.org, observed at the rally, last month was the hottest April on record globally. And just a few days before, a Shell oil platform spilled 2,100 barrels of oil into the gulf of Mexico creating a 26 square mile oil sheen off the Louisiana coast. On the other hand, at the same time we were protesting, Germany announced that, for the first time, it got all its electricity consumption from renewables -- showing us that another way is possible.

Lest you think I am a long-time radical, you should know that a couple of years ago, I wasn't even recycling, much less taking part in direct action. And I'm 40 years old, which I think goes to show that anyone can get involved at any point in their life. Among those who got arrested were young students and retirees, parents and grandparents, old time hippies and young hipsters, experienced direct action veterans and late-to-the-show newbies like me. In fact, about half of the people who were arrested were like me and had never been arrested before.

I was driven to take part in the arrest action by a growing sense of urgency in the face of increasingly undeniable global climate change and seeing (and smelling) the effects of the petroleum industry where I live and in neighboring communities, like Gary, Indiana, where people of color are disproportionately impacted.

About a year and a half ago, I helped organize the drafters of A Pagan Community Statement on the Environment. A common refrain from its few critics was that words are not enough. And they are right: the statement, which has now collected over 9,000 signatures was intended, not a substitute for action, but as a prompt to action.

The ecopagan.com website, which hosts the Statement, includes over 50 suggestions for taking action. One of those suggestions is to consider ways in which we can use our privilege to break down the very systems which create that privilege. The idea of using my privilege for good, instead of just feeling guilty about it, was empowering. I am a white, heterosexual, cis-gendered, able-bodied, nearing middle-aged, male lawyer - so I enjoy numerous privileges, and risk much less than many other people who take part in acts of civil disobedience. When I saw that Break Free was raising the stakes by staging these acts of civil disobedience, I knew I wanted to be a part of that.

I have taken part in a few rallies and marches before, but this was my first direct action and my first arrest for anything. As with some of the other marches I have been a part of, there was an introductory ceremony performed by representatives of indigenous nations. A little girl administered a smudging and then we walked to the shore of Lake Michigan and poured out water we had brought. Though it was like many of the rituals I have participated in before, the ceremony took on a unique quality for me as I anticipated the arrest. Everything that morning took on a holy quality.

For most of the march, those planning to risk arrest marched just behind the front line community representatives. Just the march itself was powerful. I kept looking behind me to see a veritable sea of signs calling for change and listening to over a 1,000 people behind us chanting and singing. When we reached the final stretch we moved to the front of the march. Forty of us held hands in two lines and walked slowly toward the waiting line of police cars. Among the chants was a call-and-response: "Tell me what democracy looks like. - THIS is what democracy looks like." 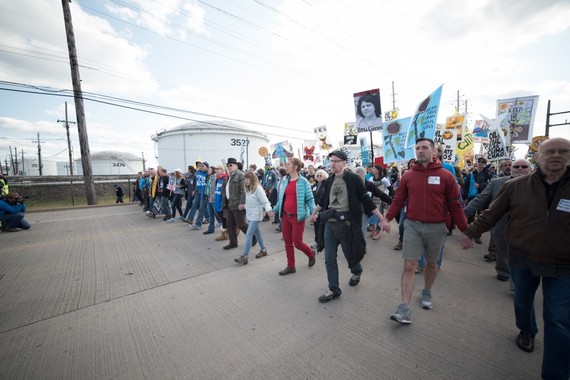 I have to admit I was nervous as we approached the line of police cars, but as we got closer, I saw only a few police. Then we looked around the corner to the entrance to the refinery to see a dozen large police officers in riot gear with three foot wood batons clasped in their hands menacingly. Standing against the backdrop of the refinery, they made quite a poignant sight. 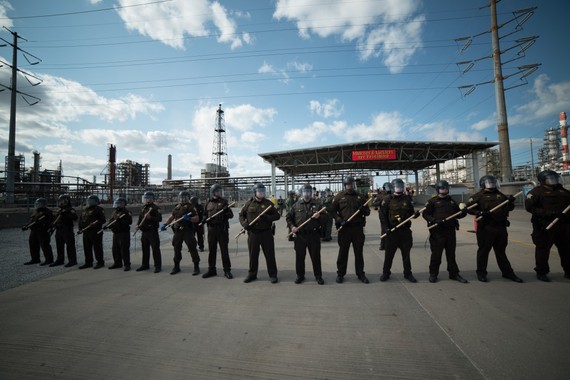 In spite of the visual image of the officers and their batons, our level of risk was calculated to be relatively low. A lot of people may not realize how much planning goes into direct actions. Everything that is done by the protesters is the product of deliberation and consensus. Our intention was to provoke arrest in as non-violent a fashion as possible. There were negotiations going on with police in advance of and during the action. Those who were getting arrested were being supported by dozens or even hundreds of volunteers who did everything from acting as intermediaries with the police to bringing the protesters food and water, from filming the action and engaging the media to singing and chanting to boost the morale of the arrestees, and much more.

When we arrived at entrance, we sat down and waited for our liaisons with the police to negotiate. Meanwhile we sang, 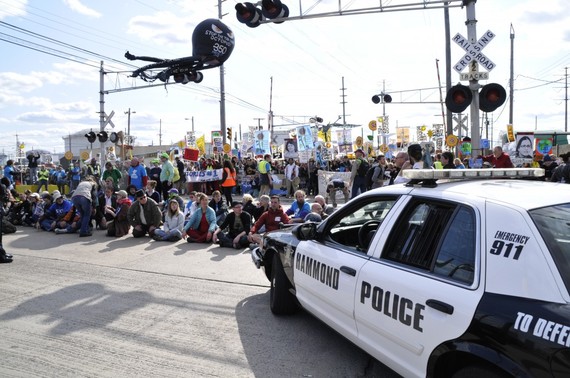 We were advised that the police would let us sit in front of the entrance as long as we wanted. We then reviewed our choices and unanimously decided to cross the property line of the BP refinery. We then processed in front of a police line and formed a circle. Then we sat down and began singing "We shall not be moved, Just like a tree that's planted by the water, We shall not be moved." And after a period of time, we were given three warnings to disperse, and then we were arrested one by one, handcuffed with plastic zip restraints, and put in waiting vans. 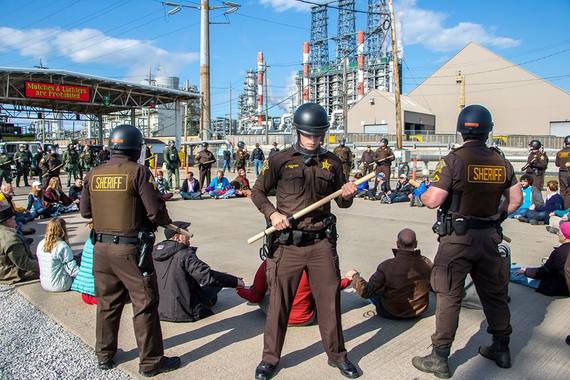 No one resisted arrest. The police were, for the most part, professional and restrained. One of the men I was with had his hands cuffed too tightly, but no permanent injury was caused. And some of the women arrested were left in a suffocating transport van too long. But the police were police were very hands-off and even courteous. One officer even expressed sympathy with the reason for our protest. We were all charged with criminal trespass. We were process quickly and released on our own recognizance the same day, due in part to the intervention of the former county Sheriff who acted as one of our police liaisons. A court date has been set in June.

What did we accomplish?

Our goal was to disrupt the business of BP, to draw attention to the climate crisis, and to show our commitment to shutting down Big Oil by getting arrested. The effect we had on BP's bottom line on the day of the protest was undoubtedly negligible. But I know we made an impression, not just on BP - which will probably never willingly change - but also on the Northwest Indiana community, and on many others who will read about or watch the event in the media. And if those people will stand together, then we would not only hurt BP's profits, but we would bring an end to Big Oil altogether and step back from the edge of the precipice we currently are hovering over.