I grew up with a cat and a dog. Bingo, a grey shorthair, sat patiently (in my young mind) while I dressed him in doll clothes and hauled him around the house with his legs flopping down, in the same way Olivia carries her cat Edwin in that well-known children's book. My dog, Sniffy, a small, black fluffy thing, was no fan of dress up, but she slept in my bed every night, fighting away bad dreams and sharing stories (we had our communication methods) as well as her fleas on one occasion.

I remember the value of pets, minus the fleas, yet once I had my own family I could not manage to bring one into our home -- until last year. That's when Ginger, a dark-eyed rodent, came to stay. 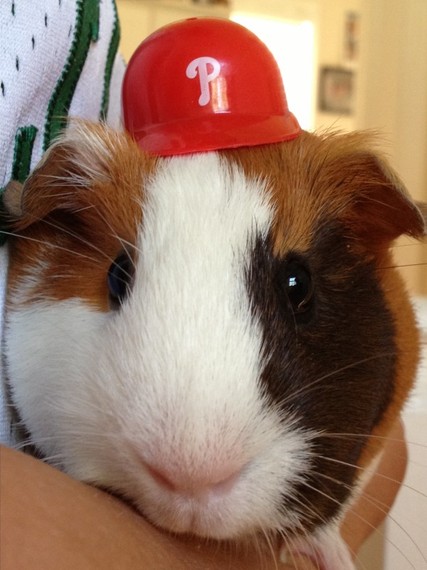 Ginger in her Phillies hat. She also roots for the Red Sox.

My kids, now 11 and 8, have been asking for a pet pretty much since they could talk. My son's second word was "dog," after "da da" and before "ma ma." When he was a toddler and surly from being tied up in a stroller, my go-to distraction strategy was to encourage him to keep an eye out for dogs. As for my daughter, her friends have all seemed to share one thing in common -- they live with a menagerie of pets that she can visit, including one close buddy who has two dogs, three chickens and some kind of mutant rabbit that's as big as a beagle.

Every year my son and daughter would write to Santa asking for a dog, and every year they would get one on Christmas morning. Except it was stuffed.

So how could I deprive my children of a puppy? Well, I am a self-preservationist. I have been pretty certain that adding one more expense, one more thing to clean and care for, one more thing that requires attention, would put me over the edge. I don't like drool. I don't like pet hair in my butter. I definitely do not like stealth dog farts.

But then last year, I found a compromise. A guinea pig. Many friends and family thought the choice was odd. "They're rodents!" they'd say, among other unsupportive comments, such as "I ate guinea pig in Peru. Not very tasty." One friend summed it up when she said, back straight, chin up, in her Swiss accent, "A guinea pig? Oh." Long pause. "How very unattractive." Sniff. 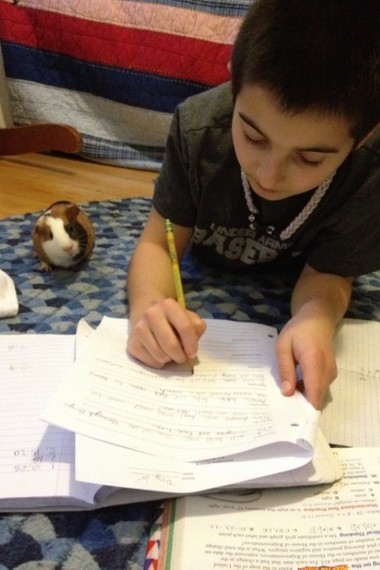 I don't want to come across as the Guinea Pig Association's director of PR, but I've found that the benefits of Ginger far outweigh having to endure people's weird feelings about the little squeakers. First, guinea pigs are pretty inexpensive and low maintenance. Ginger requires a cage, a little plastic hut to sleep in and some bedding. The kids provide her daily dose of pellet food, water, vitamin C drops, some hay and a few carrots and lettuce leaves. I clean her cage once a week, which takes about 15 to 20 minutes, and for another few minutes here and there, periodically spot clean her bedding. I probably spend about $35 monthly on her, a cost that's substantially less than my Starbucks addiction.

In return, Ginger has made my family happier all around. A recent article in a University of California, Berkeley publication describes research indicating that pets can enhance emotional and psychological well-being and relieve stress. I've seen these effects in my family. My son will quickly loosen up and relax about his school workload once he lies down to study with Ginger nestled in his armpit. My daughter's anger following a fight with me over whether she brushed her teeth will dissipate in minutes as she strokes Ginger and hears her purr (yes, guinea pigs purr). Last May, my daughter was devastated on her birthday because my son, away on a field trip, was missing our birthday tradition of cake for breakfast. Ginger stepped in as a sibling proxy for the festivities and quickly restored the birthday girl's smiles. Even I will scoop her up for a quick cuddle and tension release or I'll plop her in my husband's lap to lighten a crabby mood. 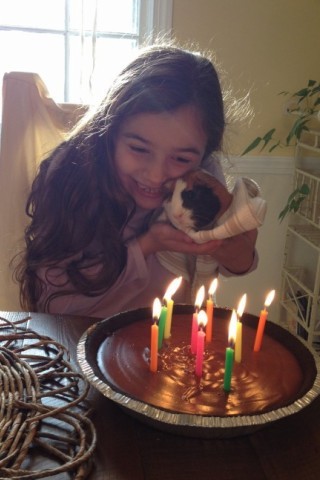 The other day I mentioned to a friend how great it's been having Ginger. "Excellent," she said. "Now you can get a dog."

More:
PetsKidsParentsStressguinea pigs
Newsletter Sign Up
Raise the kind of person you'd like to know
Subscribe to our parenting newsletter.
Successfully Subscribed!
Realness delivered to your inbox