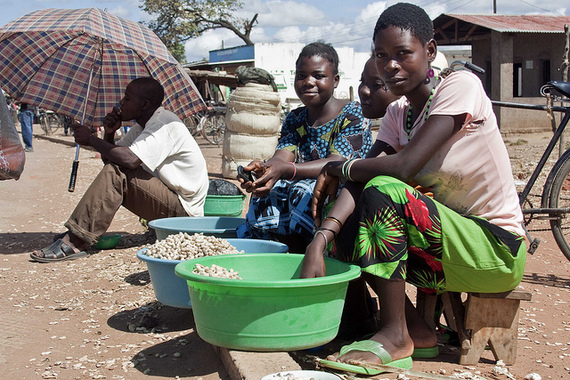 When I'm debating whether to buy something I want but don't really need, I sometimes have an imaginary conversation. With an imaginary person.

Let's call her Daliya. She lives in the Balaka District of Malawi, in southeastern Africa. Some of the money I've given to the Against Malaria Foundation (AMF) helped to fund the 235,000 anti-malarial nets that will be distributed this year throughout Balaka.

Daliya is grateful for my giving. But that doesn't soften her scorn when I'm considering an expensive indulgence. "You've already got an iPad," she says. "Why do you think you should spend $700 to upgrade to a new one?" I start listing my reasons: my four-year-old iPad is heavier than the latest models, it's running out of space, it's starting to slow down. She folds her arms across her chest. This, I know from past conversations, is a prelude to The Look, a withering stare that makes me realize how ridiculous my rationalizations appear when stacked up against the reality of her situation. Balaka is one of the poorest districts of Malawi, which itself is one of the poorest countries in Africa. Nearly three-quarters of Malawi's people live on less than $1.25 per day.

"Look at what your $700 could do if you gave it to an effective charity instead," she says. "It could protect another 420 people from malaria, or deworm 7,000 children. Doesn't that sound better than spending it on a new iPad when you've already got one that works?" Gulp.

In recent months, Daliya's arguments have started taking a different tack. She thinks I'm not devoting enough attention to the longer-term needs of villages like hers in the developing world.

"We're really happy to have mosquito nets here," she says. "Less malaria makes us stronger, more resilient. But the people you're saving today from malaria could die tomorrow from any of the other problems we're facing. Many of us have no access to safe drinking water. Some days all we have to eat is nsima (a porridge made from maize). Crops we used to plant don't grow anymore because the climate is changing. Droughts are a lot more frequent now."

I can understand her concern. Worldwide, hunger kills more people every year than malaria, tuberculosis, and AIDS combined. Lack of access to safe drinking water kills an estimated 1.6 million people annually across the globe. In contrast, malaria kills roughly 600,00 people per year. But with the funds I have available to give, I can protect more people from malaria than I can keep from starving or dying from waterborne diseases. That's because achieving a sustainable food supply and safe drinking water in developing countries is a long-term process, requiring lots of money and time.

"Why don't you give some money to Oxfam?" she says. "They've been working here in Balaka District to help us learn new farming techniques and show us how to grow crops that are better suited to our climate."

"I've been giving to Oxfam for years," I reply, "but I'm thinking of stopping because it's hard to know whether my donations have much impact. Lots of other people already give to Oxfam. Government agencies and foundations provide funding to Oxfam. I think I can make more of a difference by giving to AMF or one of the other charities recommended by GiveWell."

She glares at me. "Is this about you and your personal effectiveness, or is it about us and our needs? Malaria's important, but so are a lot of other challenges we face here. What about the larger context? You're focusing on only one piece of the puzzle."

"Sure," I reply, "but I'm just one person and I don't have unlimited funds. Shouldn't I try to send every dollar where it will do the most good?"

She sighs. "I'm not saying you should stop giving to AMF. I'm saying that you shouldn't focus exclusively on getting the most near-term bang for your donated buck. That kind of thinking will lead you to support charities that can save lives today. But some of our biggest problems will take many years to fix. Should you avoid supporting an organization just because it won't be able to demonstrate the effectiveness of some of its projects until a few decades from now? No, because the benefits could be enormous if those efforts are successful."

Daliya's on a roll. "Oxfam has hundreds of thousands of individual donors. It's not the impact of each donor that matters, it's the collective sum of their giving that makes longer-term development projects possible. If those projects end up being successful, each donor can take credit for his or her portion of the value of that success -- a value that can be very large indeed. Imagine Balaka not only without any malaria but with enough food and clean drinking water, no AIDS, and a prospering economy. That's huge. We believe we can get there, but we'll need time and lots of help."

"But what about opportunity costs?" I ask. "If I take some of the money I could have given to AMF and give it to Oxfam instead, fewer families will be protected from malaria. That's a sure thing. In contrast, the outcomes of my giving to Oxfam are much less certain."

"Trust me," she replies, "the families you could have protected from malaria might not be thrilled to hear your choice, but they'd deal with it a lot better than if you told them you were going to use the money to buy yourself a new iPad. Oxfam is working on many important issues, and they have a long track record to show that they're capable of achieving transformative changes. Even if only some of their projects succeed, your donations could end up helping many more families in the future. Sure, it's a gamble; the outcomes of development projects are rarely certain. But it seems like a pretty good gamble, given Oxfam's experience."

"Okay," I say. "That makes sense to me." "Of course it does," she says with a smile. "I'm just a figment of your imagination. You convinced yourself, I simply helped you work through the arguments."

The bottom line is that I want to save lives today, but I also want to contribute toward improving the context in which those lives are lived. I want the people whose lives I'm saving to have better lives in the years ahead, and I want their children and grandchildren to have even better lives. In order to play a role in achieving those outcomes, I have to be willing to take a bet on the expected value of longer-term development projects.

That's why I still give to Oxfam.