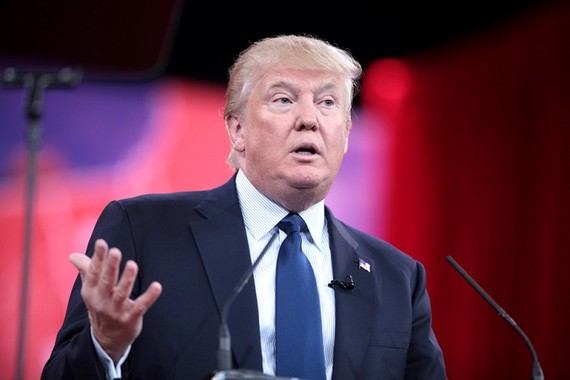 Mr. Trump may be surging in the Republican primary, but he has it all wrong on immigration and our relationship with our southern neighbor. His views aren't just incorrect; they are harmful to Americans of all descents.

Mexico is our second largest trading partner, and with wages in China on the rise, some say that Mexico could become our top trading partner in the next five years. It's not just companies making profits; there are 6 million American jobs that depend on trade with Mexico.

Donald Trump made headlines by claiming that Mexico only sends criminals and rapists over our border, but the fact is that Mexico is sending goods and services our way, as well as labor that comprises a vital part of our own economy, particularly in agriculture. Trump demonstrates disrespect where gratitude would be more appropriate.

The Aspen Institute Latinos and Society Program recently organized a tour of the area known as the Borderplex, consisting of Juarez, Mexico, Southern New Mexico, and El Paso, Texas. Although not as sensational as Trump's visit to the border, we did see a more accurate depiction of life on our southern border with a dynamic bi-cultural, bilingual, bi-national community dating back decades, if not centuries.

Many tout the importance of building an impenetrable wall between Mexico and the United States. Such a structure ignores the reality of our shared history and throws up an unnecessary obstruction to what has been a fluid, centuries old socioeconomic exchange between families, businesses, work, and educational opportunities on both sides of the border.

Thankfully, many private sector leaders in border regions have stood up against the nativists and fear-mongers. A set of dedicated business leaders representing Mexicans, Latino Americans, and Anglos have banded together to develop their region regardless of the obstacles. They understand that the economic opportunity for both nations is too great to set aside out of an irrational level of fear about criminal activity on the border. They have chosen to work together to create a vibrant, business-friendly climate that can form a crucial part of this country's continued economic strength.

Call centers and financial services companies such as ADP and Charles Schwab are eager to invest in the region because of its educated bilingual populations ready to meet the needs of both Spanish- and English-speaking consumers in this country and hemisphere.

This region will continue to attract business investment over the long term, not just because of the opportunity to expand into Latin American markets, but because the region is guaranteed to have an excellent workforce. Regional education reform has led to dynamic bilingual schools and highly respected public universities such as University of Texas El Paso and State University of New Mexico. These institutions are churning out numerous highly qualified STEM students with every graduation, and the majority of them are Latino and bilingual.

Donald Trump centers his immigration views around hysterical accounts of criminality on the border. He would have us imagine that border towns are filled with gun violence and lawlessness akin to an old Western film. Crime does exist everywhere, but the truth is that Juarez has a crime rate lower than that of Chicago. In fact, El Paso is one of the top 20 safest cities in the country.

Instead of listening to those seeking to blame Mexico and make wildly inaccurate claims about the border regions, cities and states ought to take lessons from communities like those of the Borderplex. It is a model of integration that has created economic prosperity by utilizing our crucial trade relationship with Mexico. Many of our border towns are thriving hubs of growth, inclusion, and innovation. Let us not rudely demean them, but celebrate them for what they are: American success stories.