"Nonviolence is a powerful and just weapon which cuts without wounding and ennobles the man who wields it. It is a sword that heals." ~Rev. Dr. Martin Luther King Jr.

The Sikh Desi (South-Asian) American community must seek our Kirpans, call upon our spiritual wisdom and endeavor to address systemic racism, the inequalities it fuels and the violent toll it threatens to take on our congregations and sangats as it has this past month for African-American Christians, in the form of a violent and deadly hate crime/terrorist attack.

The same trauma of the deadly 2012 Wisconsin Gurudwara shooting that I felt as a Sikh daughter, I now feel as the wife of a Christian African-American husband in the aftermath of the attack on the Mother Emanuel AME Church in South Carolina. In both attacks the shooters have one stark similarity: both are White supremacists, one who took his own life and the other who is currently in custody under suicide watch.

As Americans grieve this terrorist attack that claimed the lives of nine congregants of Mother Emanuel and engage in much-needed dialogues on the legacy of the centuries of racialized violence of slavery and Jim-Crow segregation, Sikh Americans of South Asian origin must actively join the dialogue and purposefully engage with our Christian African-American brothers and sisters in solidarity. The healing sword that Dr. King speaks of evokes the spiritual wisdom that the Sikh Kirpan inspires in the hearts and lives of Sikh Americans across the country.

This quotation of Rev. Dr. Martin Luther King Jr. evoked my personal relationship with the Sikh article of faith: the Kirpan. The literal translation of the Kirpan ('/keér pahn) is "hand of mercy", the Kirpan is a symbolic sword adorned by Sikh Americans on their person.

My first memory of the Sikh Kirpan is noting how it adorned my Nanima's shoulder, hanging off to the side of her waist line. She taught me that the Kirpan is a symbolic reminder for Sikhs to address that which is wrong in our personal lives and community. In my Grandmother's Sikh tradition, the Kirpan is a weapon that calls for Sikhs to wield it against the human tendency for selfishness and greed. She taught me to love the Kirpan as a weapon that graces me with the duty to speak up against and fight those things that oppress all human beings and threaten our liberation, our ability to live our truths and ultimately worshipping our creator, Waheguru, Ek Omkar-the One Creator, as she is known in the Sikh tradition and however the creator is known to brothers and sisters in other traditions. In this way, the healing sword that Dr. King calls upon invokes the Kirpan that I honor as a Sikh American woman.

South Asian Americans of the Sikh, Islamic and Hindu faith, all face the challenge of familiarizing our neighbors with traditions and articles of faith that are often misunderstood and met with Islamophobic violence. The majority of the Sikh Desi American Sangat is relatively new in America and much of our Sangat hails from the South Asian subcontinent, with the majority immigrating to the United States in the second half of the 20th century.

For many Sikh Americans, the forces that make our houses of worship targets of violent White supremacist hate crimes and create struggles with discrimination at the individual level, are predominantly understood and analyzed from within a post-9/11 framework. Sikh Americans must expand this framework to understand how this threat of violence and systemic racism has functioned historically and how the legacy of Jim Crow America, affects us as all.

It is critical for Sikh Sangats across the United States to familiarize our Sangat with the African-American Christian narrative to better understand how our American struggles to overcome racial and faith based violence are interconnected . A history that expands beyond a 9/11 narrative and one that extends to the Jim Crow era legacy of racist violence targeting African-Americans such as the attack on the 16th street Baptist Church that was bombed in 1963.

I understand that the Sikh American community is not exclusively Desi, that Sikh Americans are of all different racial and national origins. But as a Desi Sikh American from an immigrant household, this is an effort to open dialogue within my community, family of origin and those that share in a similar immigrant American experience.

Sikh Americans must have the courage to wield our Kirpans to do the healing work of addressing anti-black sentiments in our families and community against the white supremacist narratives that stereotype, criminalize and do the work of disenfranchising and killing our African-American brothers and sisters.

The same white supremacist narrative functions to tear away at the values of Guru Nanak's Sikhs that call for his followers to act on the well-being of all humanity as one human race. Sikh Americans must exert their activism in solidarity with the movement for #BlackLivesMatter in their communities.

It is the same racist narrative that leads me to read commentary by Desi Sikhs asking why African-Americans have not achieved the American dream that many recent Desi Sikh immigrants have been able to find within one or two generations? First, this notion that many Desi Sikh immigrants have can be attributed to the lack of conversations we have with African Americans and our own lack of familiarity with African-American history and culture. Second, Desi Sikh immigrant Americans had the privilege of community support, the ability to send remittances to their families in their country of origin, to sponsor family to immigrate to the United States and build a support network of loved ones, a historical experience that African-Americans do not share.

Desi Sikh immigrant Americans must take initiative to be at the forefront in the call for solidarity with the African-American community. Will our sangats reach out and support movements such as #BlackLivesMatter in solidarity? The challenges facing the Sikh Desi community are not strictly faith-based, they are intersectional challenges including racial challenges.

One example north of the Bluegrass is of the solidarity amongst young first generation Sikh Americans with Christian African Americans is that of the Beavercreek, Ohio Gurudwara Sikh Sangat. In Ohio, young Sikh American activists and their families engaged with local African-American Pastors and activist organizations such as the Ohio Student Association. Desi Sikh Americans joined community faith leaders to participate in peaceful protests by marching for #BlackLivesMatter and attending and voicing their concerns at public hearings held by the Ohio Joint Task Force on Community-Police Relations in cities across the state, concerning the shooting of unarmed young African Americans by law enforcement officers, such as John Crawford III and Tamir Rice. They brought their signs to their Sikh Sangat and shared their voices on solidarity.

Sikh American Mother and Daughter Simran Kaur and Darsheel Kaur marching in Solidarity with #BlackLivesMatter to #ReleasetheTape on the John Crawford III shooting in Ohio this past Fall. 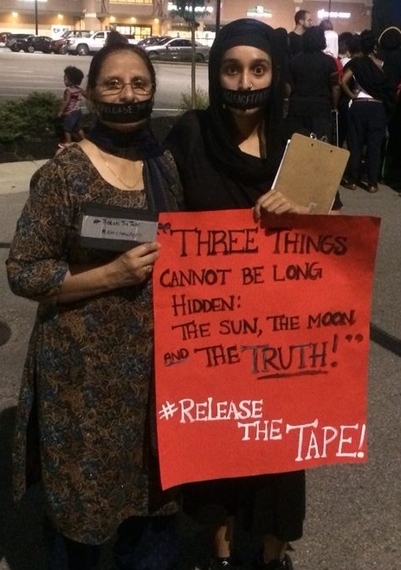 Young Desi Sikh Americans took to their Gurudwara community to urge action and local involvement in addressing #Blacklivesmatter movement and particularly issues such as the use of force by law enforcement. Together, our communities have the power to wield our swords/Kirpans to further racial reconciliation in the United States, address racial inequities and healing in the 21st century. We must yield our Kirpans in the spirit of solidarity and healing.