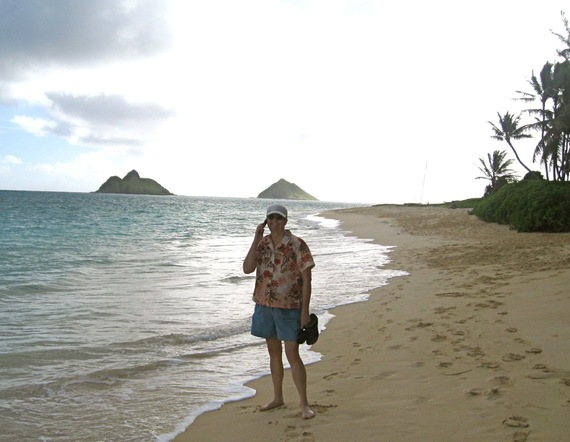 Do you think you work too hard? You're not alone. Many people I talk to, especially those younger with families, report being over-worked, overwhelmed and clearly unable to take even a moment to pause and reflect on the direction of their life. We all know that chronic overwork increases our stress levels, endangers our physical health, triggers depression and decreases our "life satisfaction." So why do we continue to put in long hours? And what's the solution? It's likely that the simple answer is to work less and live SMARTer. In fact, there is evidence that working less not only increases the quality of an individual's life -- it is also much better for the entire planet.

If you are struggling for money, it might seem crazy to hear that working less will help. After all, our culture tends to look down on anyone who doesn't jump on the bandwagon with more and harder work when the going gets tough. But there is now plenty of evidence that people who cut back or lost their jobs during the economic downturn of 2007 to 2011, are often much happier once they've adjusted. In fact, author Juliet Schor says, "...people who voluntarily start working less are generally pleased. In the New Dream survey, 23 percent said they were not only happier, but they didn't miss the money. Sixty percent reported being happier, but missed the money to varying degrees. Only 10 percent regretted the change. And I've also found downshifters who began with a job loss or an involuntary reduction in pay or hours, but came to prefer having a wealth of time."

Okay, so what might "a wealth of time" look like? Schor, the author of True Wealth goes on to explain that as we work less, we necessarily spend less, and that in turn causes us to emit and degrade less. She says, "People who have more time at home and less at work can engage in slower, resource-intensive activities." Instead of working so hard and then compensating by purchasing/consuming items of need, we start doing things for ourselves and become more self-sufficient. Simple acts like eating at home more than eating out, growing our own food in a garden, grooming our own children, selves and pets, taking a walk instead of joining a gym are all inherently more enjoyable and satisfying when we have extra time. Not only does doing-it-yourself carry deep satisfaction, it is also much kinder to the planet. According to Schor, dozens of studies show "...that nations with shorter working hours have considerably smaller ecological and carbon footprints."

Okay, so even if we were to admit that having extra time might improve the quality of life, how would we go about doing it? An article by Michael J. Coren at fastcoexist.com suggests a transition to a 21-hour week as a way to "reset the industrial clocks in our heads."

He goes on to say,

There is nothing natural or inevitable about what's considered a 'normal' 40-hour work week today. In its wake, many people are caught in a vicious cycle of work and consumption. They live to work, work to earn, and earn to consume things. Missing from that equation is an important fact that researchers have discovered about most material consumption in wealthy societies: so much of the pleasure and satisfaction we gain from buying is temporary, ephemeral, and largely relative to those around us (who strive to consume still more, in a self-perpetuating spiral).

Of course, I'm not saying this is easy to do. My husband Thom and I certainly went through the stages where we thought having that big house, that nice car, or all that stuff would make us happier. But as time went by it became more and more evident that buying more stuff and then working harder and harder to pay for it was a rat race that could never be won. After all, what we really wanted is what most of us want -- deeper and more loving connections, freedom to do what our heart needs to express, opportunities to be of service, and the good health and time to enjoy it all. Say what you will, but most everything else is a distraction. At some point, all the stuff you own, owns you. Are you willing to trade your life for it?

While few of us might be willing to scale back our hours of work to 21 per week, any reduction is a beginning. The first step is to admit that working harder to buy more things will not make any of us any happier. Secondly, perhaps it is time to start being honest with ourselves and admit that the road to well-being is not paved with a grueling and time-consuming job. Lastly, it would be wise to start redefining our definition of success in a way that elevates and enhances the human condition. Or, maybe it's as simple as recognizing that true wealth and happiness comes when you live a SMARTer life, 365.