After a very long courtship, 27 years to be exact, George Kirby, 103, and Doreen Luckie, 91, have tied the knot, which makes them the world's oldest newlyweds.

The couple got married in Eastbourne, England Saturday with close family and friends in attendance. Despite their years, the two still had the "newlywed glow" and looked very much in love as they kissed on the steps outside the venue. 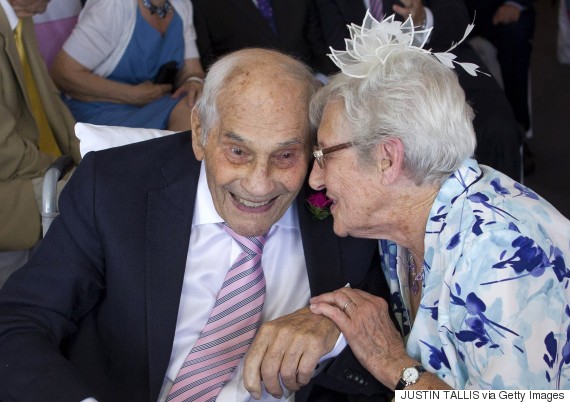 "It's a bit of a surprise really, after all this time, getting married again," Luckie said. She was married previously but started dating Kirby after becoming a widow. The two have seven children, 15 grandchildren and seven great-grandchildren between them.

It took some prodding by his son to "make an honest woman out of Doreen" before Kirby finally proposed to her this year on Valentine's Day. Luckie reportedly even had a bachelorette party just a few nights before the wedding while Kirby's bachelor party had to be canceled, because he suffered a fall in the bathroom just days ago.

With a combined age of over 194 years, they might just hold the world record for the oldest couple to get married.

A spokesperson for Guinness World Records told The Huffington Post that they are waiting for evidence from the couple before they make the record official. The current record is held by a French couple who were a combined age of over 190 years when they got married.