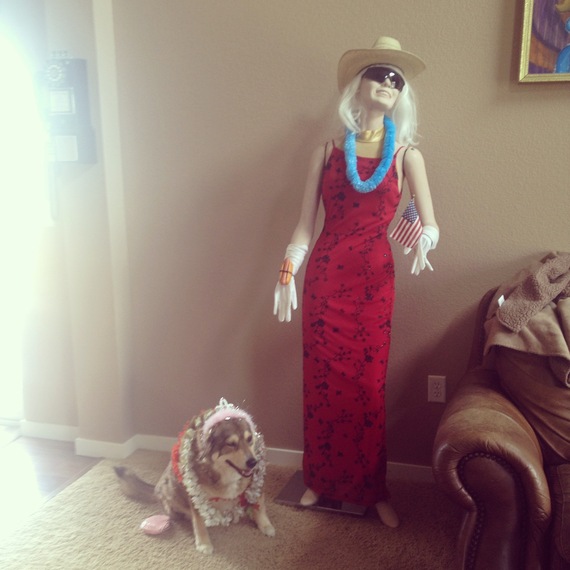 I have a new baby. Her name is Tilly, short for Matilda. She's named after the grandmother of the woman who owned the antique shop in Berthoud, Colorado.

Tilly has thick, black eyelashes and is completely bald, so today she's wearing a white wig. She has no hands, which doesn't bother me, although it makes the neighbor kids stare curiously when they see Tilly through the front window.

She doesn't seem to mind. She knows she looks darn good for being 84.

Tilly is my fourth mannequin. My house is getting full. So stop asking me if I'm going to have another kid. We're totally at capacity over here with our only child, two dogs, four fake people and all the roly-polies my daughter sticks in her pockets.

My mannequins are more of an odd hobby or home decor statement than a political statement -- but I can't deny that I dress up Tilly for holidays and have been known to small-talk with her when I work from home and get lonely. My house is never empty, yet Tilly never complains about what's for dinner or throws up on the carpet after eating an entire pillow (that'd be my dog, not my daughter).

I'm not saying I buy new mannequins instead of having more babies, which everyone, especially grocery store clerks who know nothing about my uterus, regularly tell me I need to do. But I am saying I'd rather buy another mannequin than be pregnant again. Those cankles.

This is my life. I have one kid. I'm happy with that.

And I'm pretty sure my only child will grow up perfectly adjusted. Well, as adjusted as can be expected with a mother who decorates the living room with huge, handless dolls.

Suzanne Heintz also knows about being happy with a life that might not perfectly fit into the grocery store clerk's American Dream.

Heintz has a mannequin family, although hers is an artistic critique of outdated societal expectations about women.

And hers has gone viral.

Heintz, a Denver photographer, graduated from the University of Colorado-Boulder in the '80s with a major in fine arts, English and communications.

Heintz was raised in the traditional Mormon church, immersed by the "glorification of the role of women as mother and homemaker," as her website puts it. In the late '90s, Heintz was really feeling the pressure to settle down, get married, have children.

But that wasn't her.

"I considered myself a successful person, especially in regards to my career," Heintz says. "I had my own home, was financially independent, went to school, but no matter where I went, people were asking me, 'Where's the man?' "

So she found the man: Chauncey, a tall, dapper man-equin. And she staged and took pictures of their "marriage."

At that point, it wasn't so much a feminist statement as it was a personal one, Heintz says.

Then came the child, Mary Margaret.

For the next 14 years, Heintz shot satirical photos with this mannequin family, a spoof on the overly crafted image-shaping that the typical American family spews out all over Facebook (and beyond). Photos that capture only that flicker of hollow perfection. An expressionless husband, an object, a space-filler, a prop to "complete" her scenes.

Heintz, Chauncey and Mary Margaret swimming in the pool. Opening Christmas presents. Tending to a beautiful garden. Heintz captured many of the quintessential American family memories, except they meant absolutely nothing.

But they sure looked the part -- to others.

"To me, that's why the mannequins are a great symbol: of looking the part. Checking off the check boxes of life but never really having the true emotional context of what those images represent," Heintz says.

Although some emotions have slipped in.

After hauling her dolls to Paris -- an overwhelmingly expensive and exhausting experience (hmmm, sounds like a typical family vacation) -- Heintz ended up stripping Chauncey of all of his clothes and leaving him on the street corner.

She was done with him.

A French newspaper picked up the story, and suddenly it went viral. Heintz's photos blanketed publications and TV shows around the world, and letters began spilling in from other women who related to her. The response reached such a threshold that Heintz decided to take Chauncey back.

She staged the renewal of their vows June 16 at the dramatic Grant-Humphreys Mansion in Denver, complete with a full 50-person production crew, including Boulder stylist Jessica Licata.

The mannequins didn't need much primping, although Licata did get to brush Chauncy's wig and situate it on his head. As for Heintz, her style was classic '50s retro, which has become almost a spoof of the image of the "perfect woman."

Heintz visited bridal shops and conventions and bought herself a glorious gown. She says she didn't think it was fair to judge the experience from a distance, so she jumped in.

"I gained a lot of sympathy for what people experience going through that process," she says. "How awesome it must feel if you spent your entire life waiting for it ... and there is this whole industry of people just waiting for you with open arms and free glasses of champagne, where everything sparkles and smells good, and there are mirrors all around you. It's so seductive, I don't think any woman can go through the process and not cave. I did. There were times I was looking in the mirror and I thought, 'Wow, I get it. I so get it. This dress is fabulous, and I almost do want to drop $5K on it.' And I wasn't even getting married."

She says she has had marriage proposals before, and she and her boyfriend of seven years choose not to get married.

"It brought issues up. But healthy, good stuff," Heintz says. "I'm in it to learn, too. That's why I like to do it in public: to have a conversation, share stories. It's not just a picture. It's a living, breathing experience. It's not just image-making. It's sharing life experiences, which is what human beings ultimately want."

She hopes her fake family ultimately inspires realness. She hopes it shines a safe and silly light on heavy, painful topics and helps others become conscious consumers of society's messages.

I think the humor makes that shot easier to swallow, and the mannequins put some distance between the audience and the message, so it's easier to see objectively. It's obvious how ridiculous this charade is in her photos, although I have similar pictures of my own family on Facebook right now.

Heintz is gearing up to release her renewal-of-the-vows pictures soon.

A&E's "Shipping Wars" featured her story in late July. "Ripley's Believe It Or Not" contacted her, too. They thought she really lived with mannequins.

I mean, who would live with a bunch of mannequins?

Read more articles about the weirdest city in America, Boulder, Colorado, here: Only In Boulder.