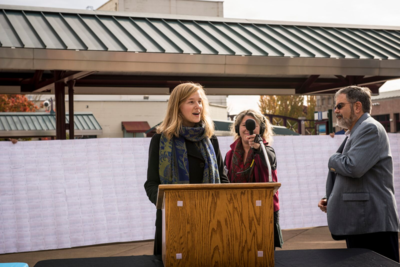 This is fantastic news. If you've ever stood behind a diesel bus spewing hot pollution as it left a bus stop, you'll know why. Buses that rely on diesel engines are big polluters. That brown soot and exhaust isn't just unsightly and smelly, it's dangerous. Particulate matter from trucks and buses contains numerous harmful gases and upwards of 40 cancer-causing substances. And buses fueled by compressed natural gas are hardly better. In fact, research shows that a diesel bus emits a whopping 3,000 grams of carbon per mile, CNG 2,800, diesel hybrid 2,300, fuel cell 1,550, and battery electric 650 (factoring in the emissions from the electricity used).

In Eugene, Oregon, Lane Transit District (LTD) officials announced their planned purchase of zero emission buses at an event organized by the Sierra Club to demonstrate the community's enthusiasm for the purchase. Sierra Club organizers and residents unrolled a 50-foot banner of more than 1,000 signed postcards in support of cleaner buses. Backed by widespread community support, LTD is considering buying more electric buses in years to come.

Hundreds of thousands of diesel buses continue to operate around the country, and most average less than five miles to the gallon. The emissions from these diesel buses can cause or exacerbate diseases like asthma. It's no coincidence asthma rates are highest among city dwellers; they live where diesel buses are more prevalent. And people of color and low-income residents, especially children, typically suffer disproportionately from particulate matter, like the kind emitted from diesel buses. African-American children, for example, are three times more likely to be admitted to the hospital for asthma than other children, and Latino children are 60 percent more likely.

Zero emission buses are one important solution that will make our communities safer. Electric buses use electricity to power a battery, so there's no gas guzzling, no dirty oil changes, no internal combustion engine, and no dirty exhaust. Whether it's for buses or cars, electric vehicles are lower in emissions than conventional vehicles, even factoring in the emissions from the electricity. And these electric buses and cars will get even cleaner over time as we switch to more renewable sources of power. Additionally, hydrogen fuel cell buses, when the hydrogen is derived from solar, are an intriguing transit option too.

In Eugene, LTD expects to save $42,550 for the five buses in equivalent fuel costs each year compared with diesel-­electric hybrid models. Worcester, Massachusetts, a city with six fully electric, zero emission public transit buses, expects each of the buses to cut operating costs by nearly $3 million over 12 years and eliminate 130 tons of carbon dioxide emissions per year. 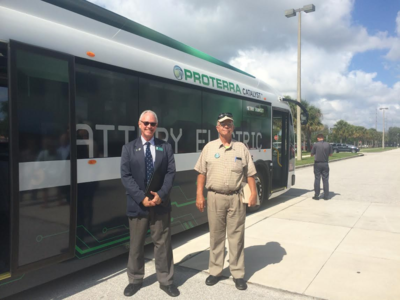 Sierra Club is working on the ground in key cities to get more zero emission buses on the road. In the Tampa Bay, Florida area, we successfully campaigned to get Pinellas Suncoast Transit Authority to reverse its decision to replace aging dirty diesel buses with new dirty diesel buses. Instead, with 35 Sierra Club supporters in attendance, the PSTA board voted recently to invest in seven new hybrid buses and voted unanimously to research opportunities over the next few months to invest in fully electric buses and submit a grant application to purchase up to ten electric buses for their fleet. "There is no reason to wait," said Sierra Club Florida Healthy Air Campaign's Phil Compton, who has helped to set up bus demos for transit agencies with both Proterra and BYD buses.

But Pinellas County isn't the only place in Florida that's looking to go electric. Tallahassee already has five zero emission buses in its fleet. Miami-Dade Transit has been testing a 40-foot electric bus as part of the community's initiative to seek cleaner energy sources for its bus fleet. Miami-Dade County Mayor Carlos A. Gimenez recently announced his vision for a fleet full of electric transit buses.

Sierra Club has received funding for zero emission vehicle advocacy from a number of our donors. A small portion of the funding for this initiative comes from Proterra, the zero emission bus manufacturer, which recently opened up a new U.S. headquarters in Silicon Valley. While we are fans of Proterra's work, we are also fans of other companies succeeding in the zero emission bus arena, such as BYD, which will supply LTD's buses, New Flyer, which supplies Chicago's electric buses, and a combination of companies building hydrogen fuel cell buses with solar-derived hydrogen, as the masses have enjoyed in Oakland, California. We're advocating for transit agencies to invest in any kind of zero emission bus technology, no matter which company provides the buses.

With lower operating and fuel costs, slashed carbon emissions, and the ability to decrease asthma rates, zero emission buses are the cleaner, greener, and healthier transportation option. Many more transit agencies should climb on board.